Through a Lens tour: Irish History 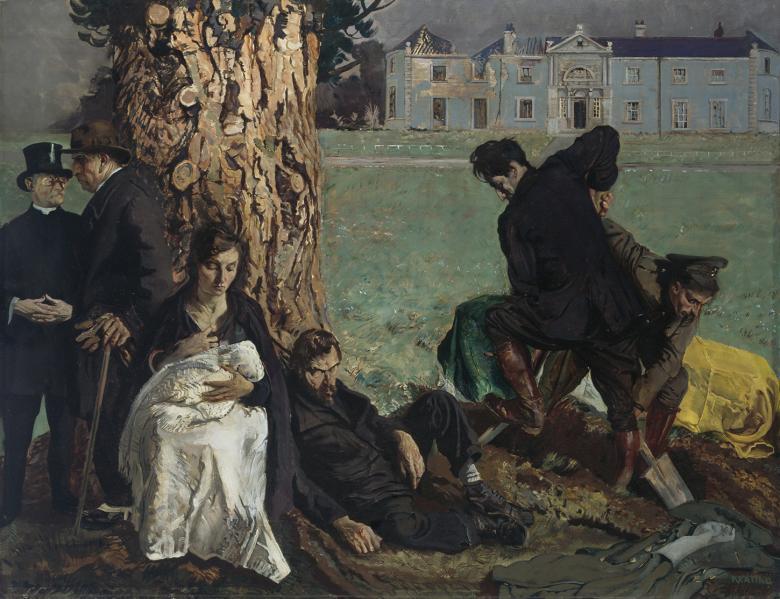 This selection of artworks explores pivotal points in Irish history through art in the national collection. Artists documented important moments in history with portraits of key figures and accurate depictions or artistic interpretations of historical events. An example of each of these methods of engaging with history can be found in the following works. This tour offers a brief snapshot of Irish history through art - if you would like to know more, you can consult our research library.

"Painted histories of great actions… cannot possibly be beheld without warming the heart and enflaming the mind…"
Samuel Madden, Irish author and champion of the arts (1686-1765) 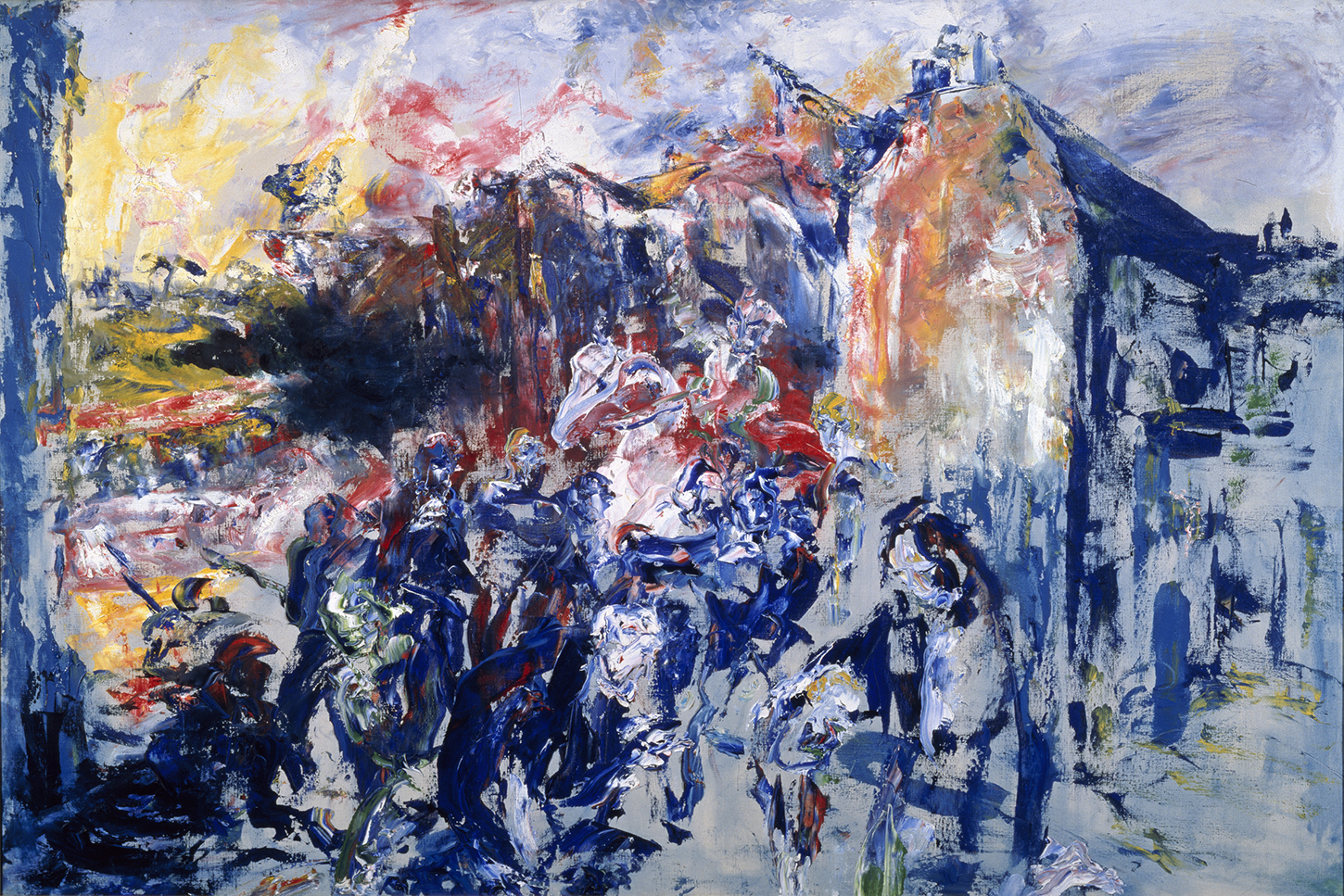 This is one of Yeats’s well-known Expressionistic paintings. Expressionism uses colour and shapes to express emotions in art. There is so much in this work that is open to interpretation.

Take some time to look at each part of the painting:

It has been suggested that this work has an anti-war message. It may have started as a sketch by Yeats called 'Let there be no more war’. He, like many people at the time, had lived through two World Wars, the Irish War of Independence and the Irish Civil War. Perhaps this is his way of processing the emotions he felt through all of that?

There are some parts of the painting that art historians have named: 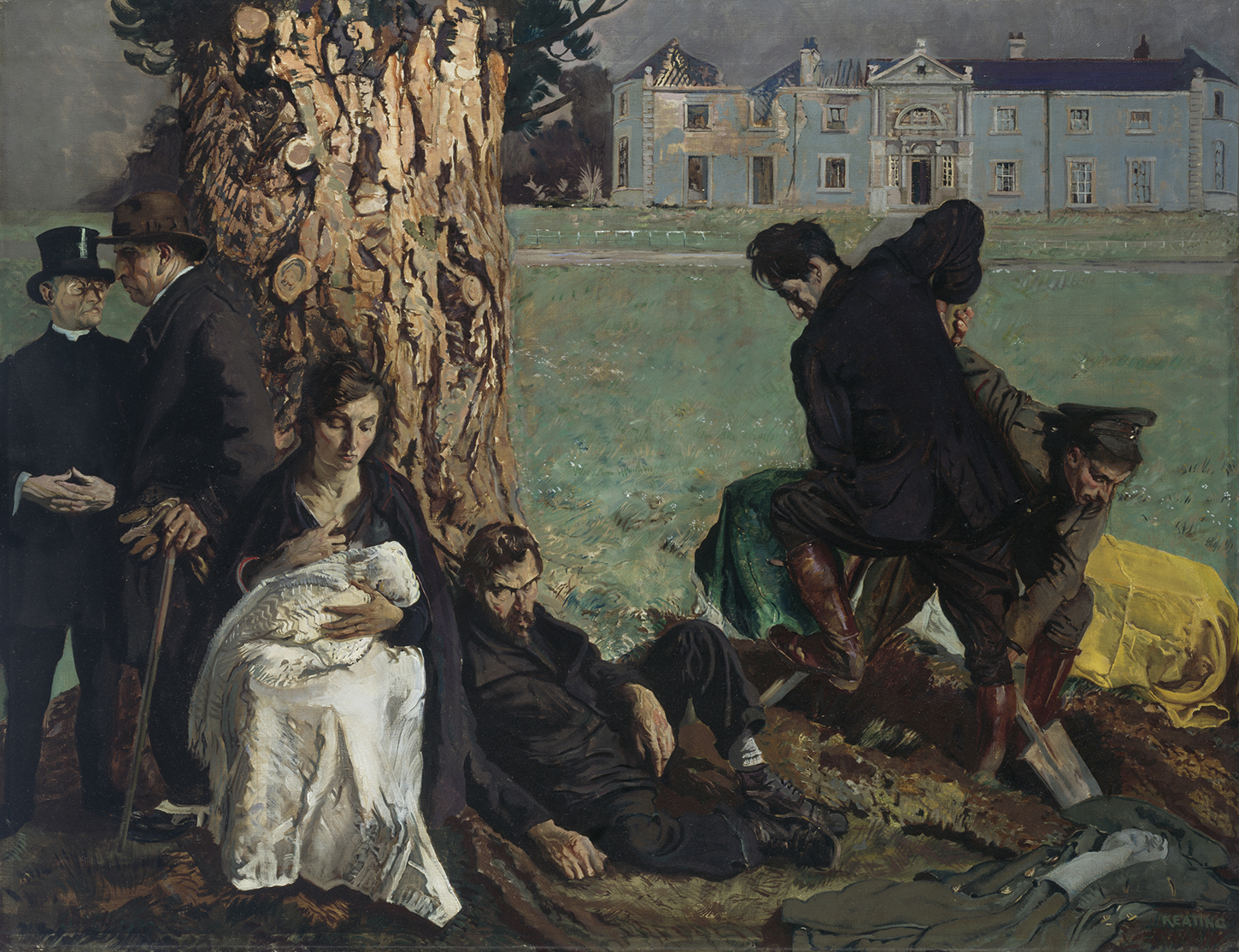 An allegory uses imagery to express a larger hidden meaning. In this case, Keating addresses social and political matters affecting Ireland in 1924, focusing on the destructive nature of the Irish Civil War. The war was fought between people who supported and opposed the Anglo-Irish Treaty, which established the Irish Free State.

In the background a burnt-out country house symbolises the fate of many grand houses at the time. They were seen as symbols of Ireland’s upper classes who often treated their tenants poorly. Some 300 properties were destroyed across Ireland in the 1920s.

They are a clergyman and a finely dressed businessman. Keating uses them to present his suspicion of the clerical, political and business elite in Ireland at the time and highlight their inaction in helping to resolve any conflicts.

In front of the tree, a young mother (Mother Ireland, actually a portrait of Keating’s wife, May) sits nursing her baby (a symbol of future generations). What do these two together symbolise? Beside her sits a dishevelled, bearded man. This sleepy self-portrait represents Keating's own disillusionment with the political situation facing Ireland.

A uniformed soldier of the Free State Army (in green) and a member of the anti-Treaty forces (in black), face in opposite directions while digging a grave. They are burying the tricolour-draped coffin beside them. This is a very pointed message.

They are destroying the Irish Free State with their infighting. 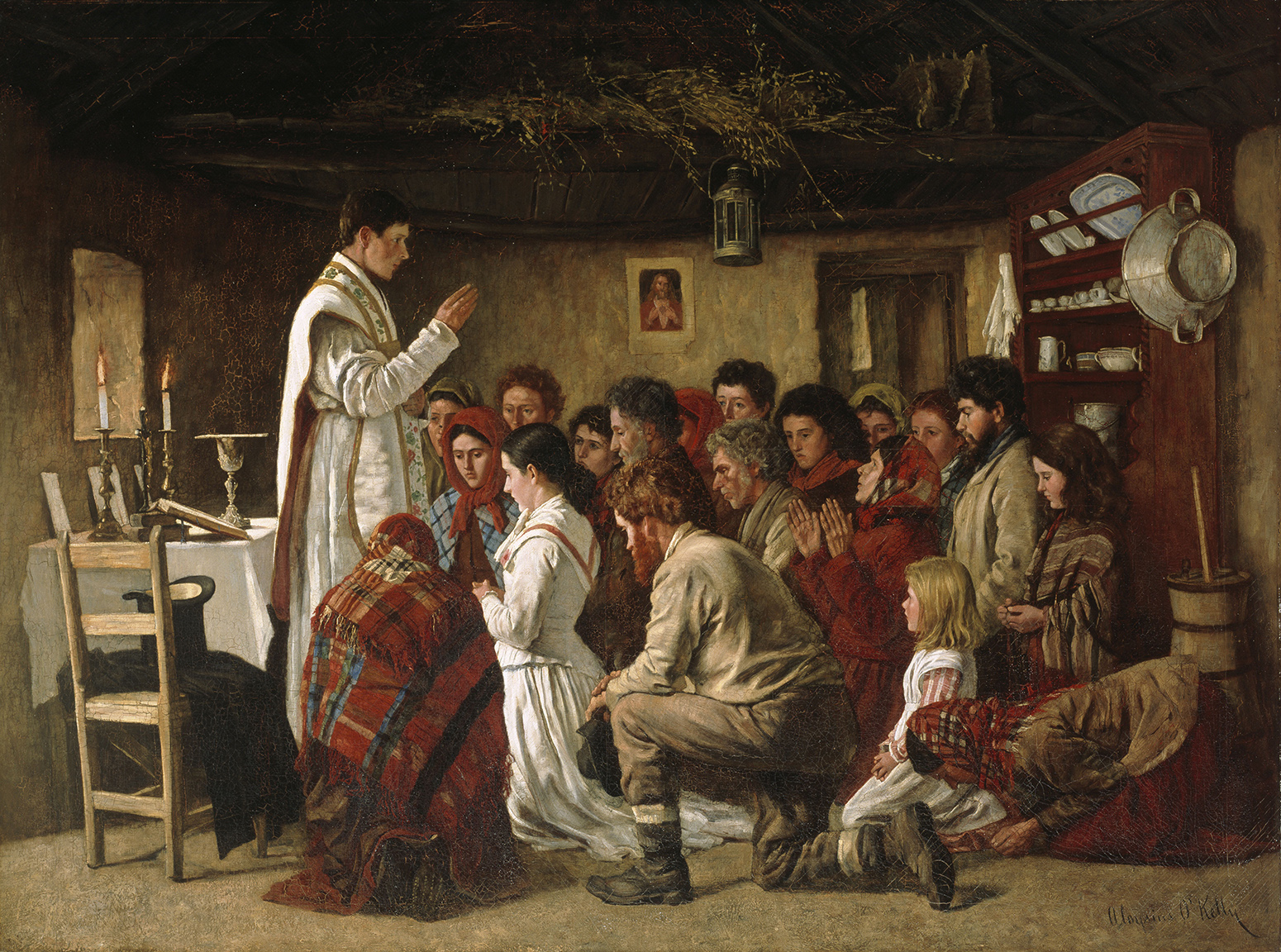 Aloysius O'Kelly (1853-1936), Mass in a Connemara Cabin, 1883.
On loan from the people of St Patrick's, Edinburgh and the Trustees of the Archdiocese of St Andrew's and Edinburgh.Credit

As the title suggests, this is a Catholic mass taking place in a small home in Connemara in the West of Ireland. This is also supported by the people wearing traditional clothing of the region. Scenes like this were not uncommon at the time. It is possible that the priest is visiting home after being ordained and is saying mass for his family and friends. This theory is mostly based on how young the priest looks. What age would you say he is?

Another option is that this is a traditional mass called the Stations. It dates back to Ireland under Penal Laws, which attempted to essentially outlaw Catholicism. Priests would visit homes to say mass instead of saying mass in a church. This continued after the Penal Laws were abolished in 1829. This was also for those who lived too far from a church. After mass the priest left, and those who attended the mass would stay for food and socialising. 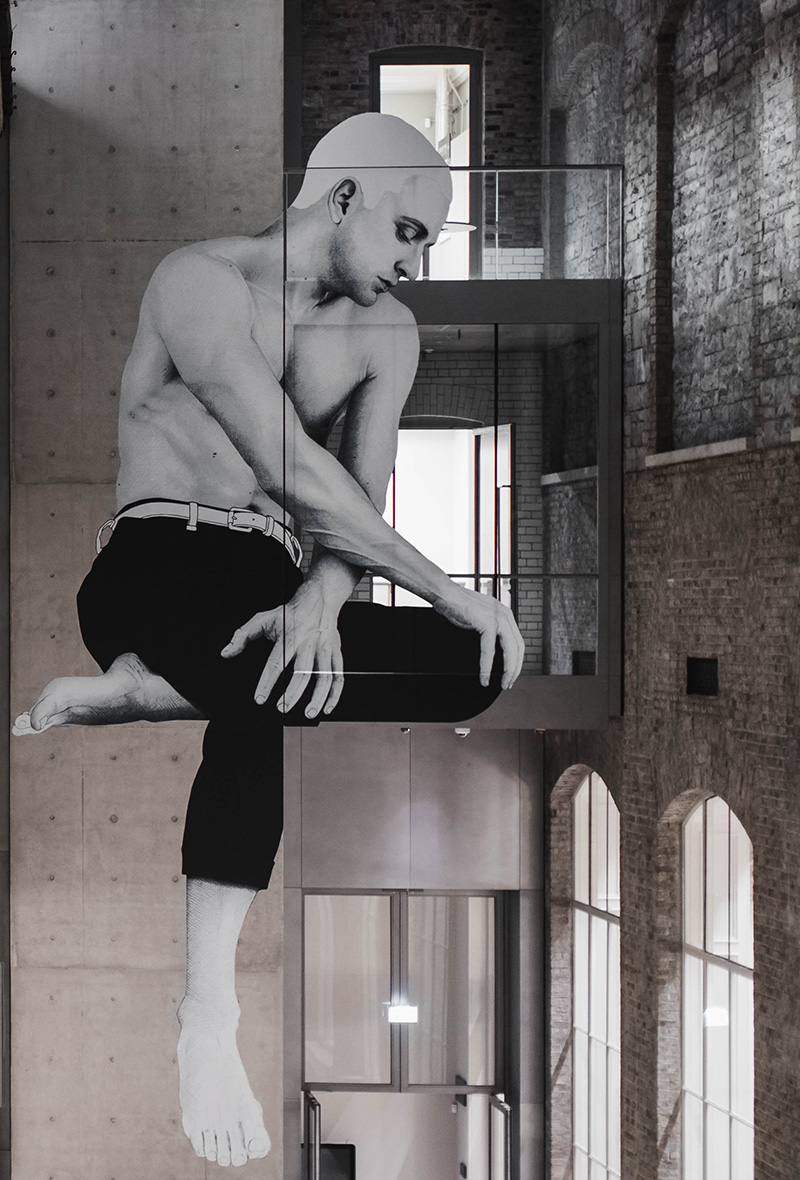 Finding Power (2018) was created by street artist, illustrator, art teacher and activist Joe Caslin, and depicts writer and activist Stephen Moloney in a seated position. It was commissioned by the Gallery in response to the 2017/18 exhibition Frederic William Burton: For the Love of Art. The whole project includes this large-scale installation, as well as seven photographic portraits, a highly finished graphite and ink drawing and a sketchbook (you can find out more about the photographs via the links below).

The sitter, Stephen Moloney, was heavily involved in the Yes campaign for the Marriage Equality Referendum here in Ireland in 2015. The referendum amended the Irish Constitution to allow two people to marry regardless of their sex. It passed by 61% and was the first time a state had legalised same-sex marriage by popular vote. During the campaign, Stephen found his power in fighting for marriage equality in Ireland. However, after the campaign was over, he needed to look inwards to find his own power and his voice again. Finding Power represents not only one person’s fight for equality but also a pivotal moment in the shifting acceptance of LGBTQIA+ people in Ireland. 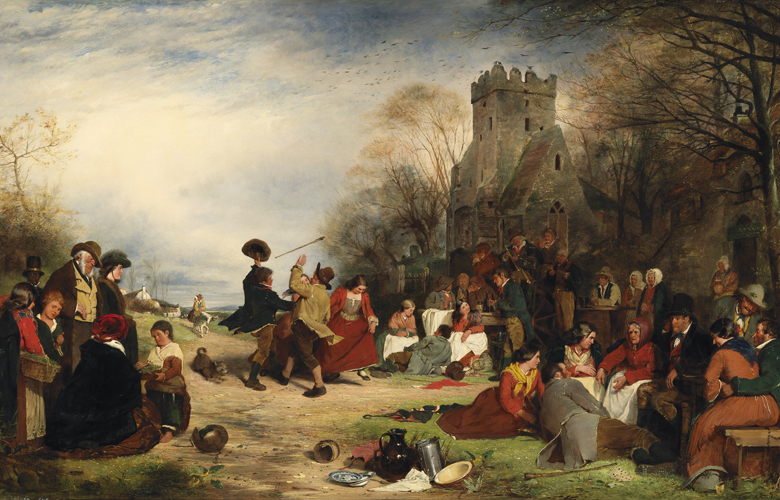 Saint Patrick (c.385–c.461) was born in Roman Britain. He was kidnapped and brought to Ireland by Irish raiders when he was 16 years old. He escaped to Britain six years later and became a priest, returning to Ireland to convert the pagan Irish to Christianity.

The 17th March, traditionally the day Saint Patrick died, was made an official Christian feast day in the early 17th century. The celebration of Saint Patrick’s Day has been a religious day and a day of festivities, even as far back as the 1800s, as we can see in this painting. It was declared a national Irish holiday in 1900. 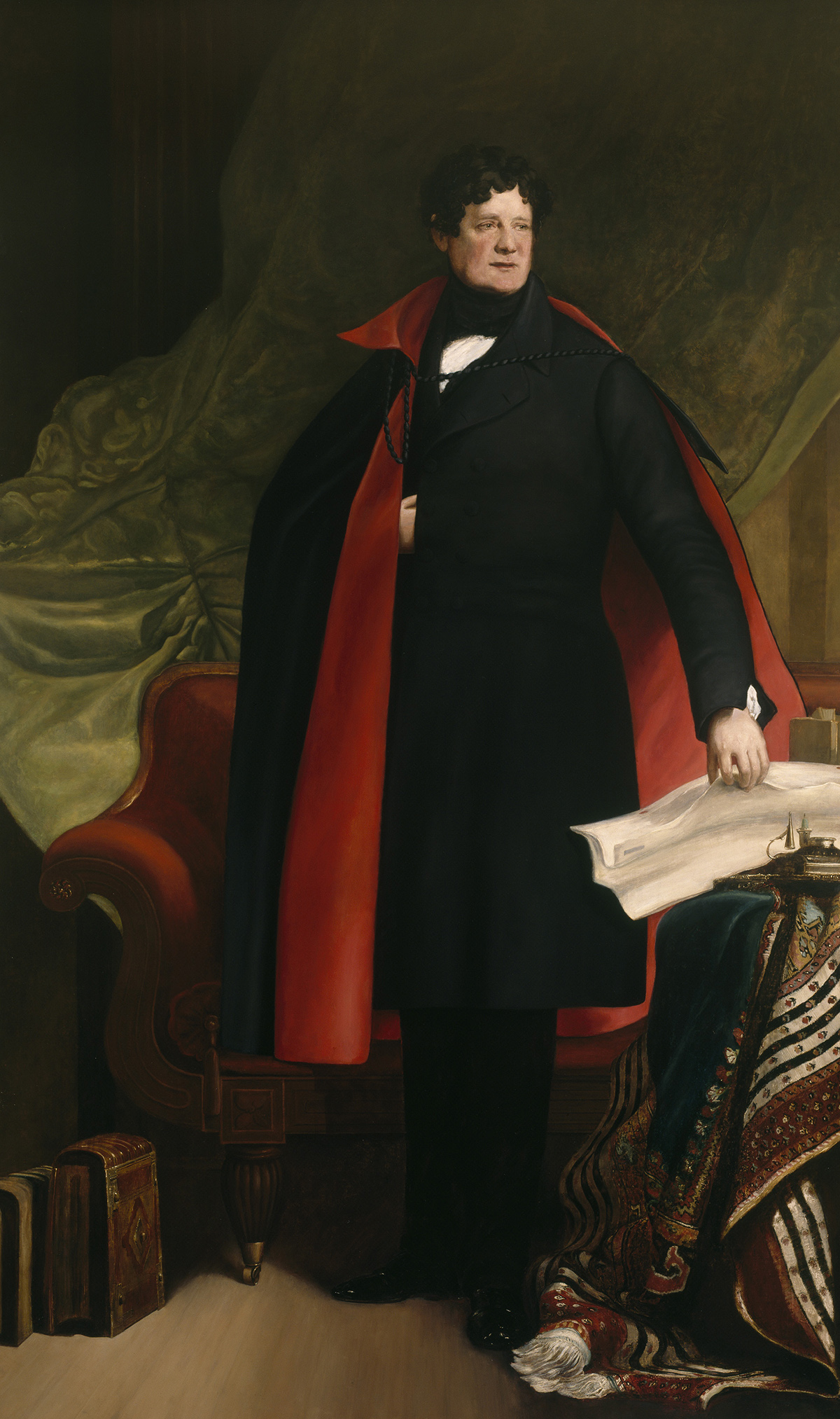 David Wilkie (1785-1841), Portrait of Daniel O'Connell as Governor of the National Bank, 1838. On loan from NatWest GroupCredit

Daniel O’Connell, known as ‘The Liberator’, created modern Irish nationalism. He was born into a Catholic aristocratic family. Until the age of 5 he was brought up by a local working class family where he learnt the Irish language and traditional customs. He then lived with his wealthy uncle and went to school in Europe. He joined the legal profession and was called to the bar in 1798. This meant he was one of the first Catholics to enter the legal profession after the ban on Catholics practicing law was lifted in 1792.

In 1800, he delivered his first major speech in a political debate. He opposed the Act of Union with Britain, which merged the parliaments of Great Britain and Ireland. He supported Catholic Emancipation, which removed many of the restrictions placed on Roman Catholics in Ireland, including the right to sit in parliament, which was achieved in 1829. In February 1830, O’Connell became the first Catholic in modern history to sit in the House of Commons. His political career lasted until his death in 1847.

Throughout his life, he fought for equality and freedom as a strong leader in Irish history. 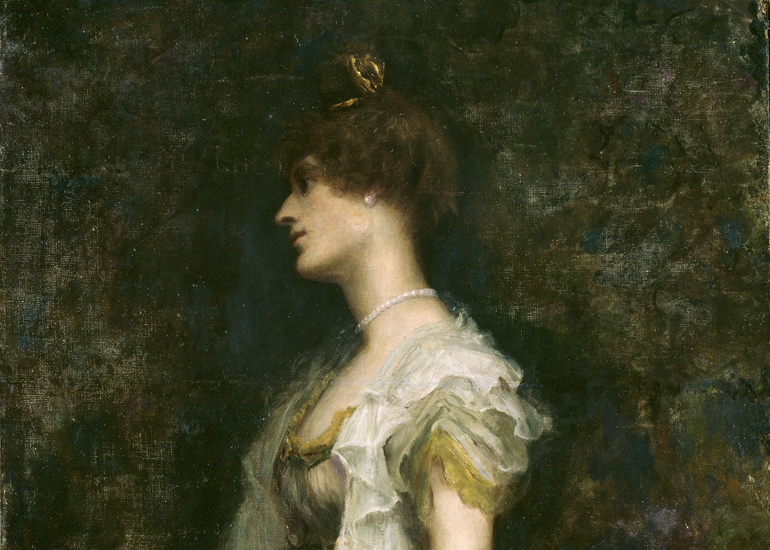 Born Constance Gore-Booth, this influential historical figure was raised in a wealthy family in Sligo. Throughout her life she fought for the freedom of all people in Ireland. She married a Polish aristocrat, who painted this portrait.

While Markievicz studied art, she developed a keen interest in nationalist politics. She became a member of Inghinidhe na hÉireann (Daughters of Ireland), an Irish nationalist women’s organisation, and Sinn Féin, an Irish political party. Markievicz also joined the Irish Citizen Army, a small paramilitary group made up of trained trade union volunteers, and was made staff-lieutenant.

She was one of many women to take part in the 1916 Easter Rising, an armed insurrection by Irish republicans to end British Rule. In 1918, she became the first woman to be elected to the British parliament by winning a seat for Sinn Féin in Dublin. She was elected from a jail cell in Holloway prison,  where she was imprisoned for staging a peaceful protest against the forced conscription of Irishmen in World War I. Markievicz, as a form of protest, never took her seat in parliament.

It is actually seen as an unusual representation of Markievicz as she normally promoted her image as a soldier and was often photographed in her own uniform. 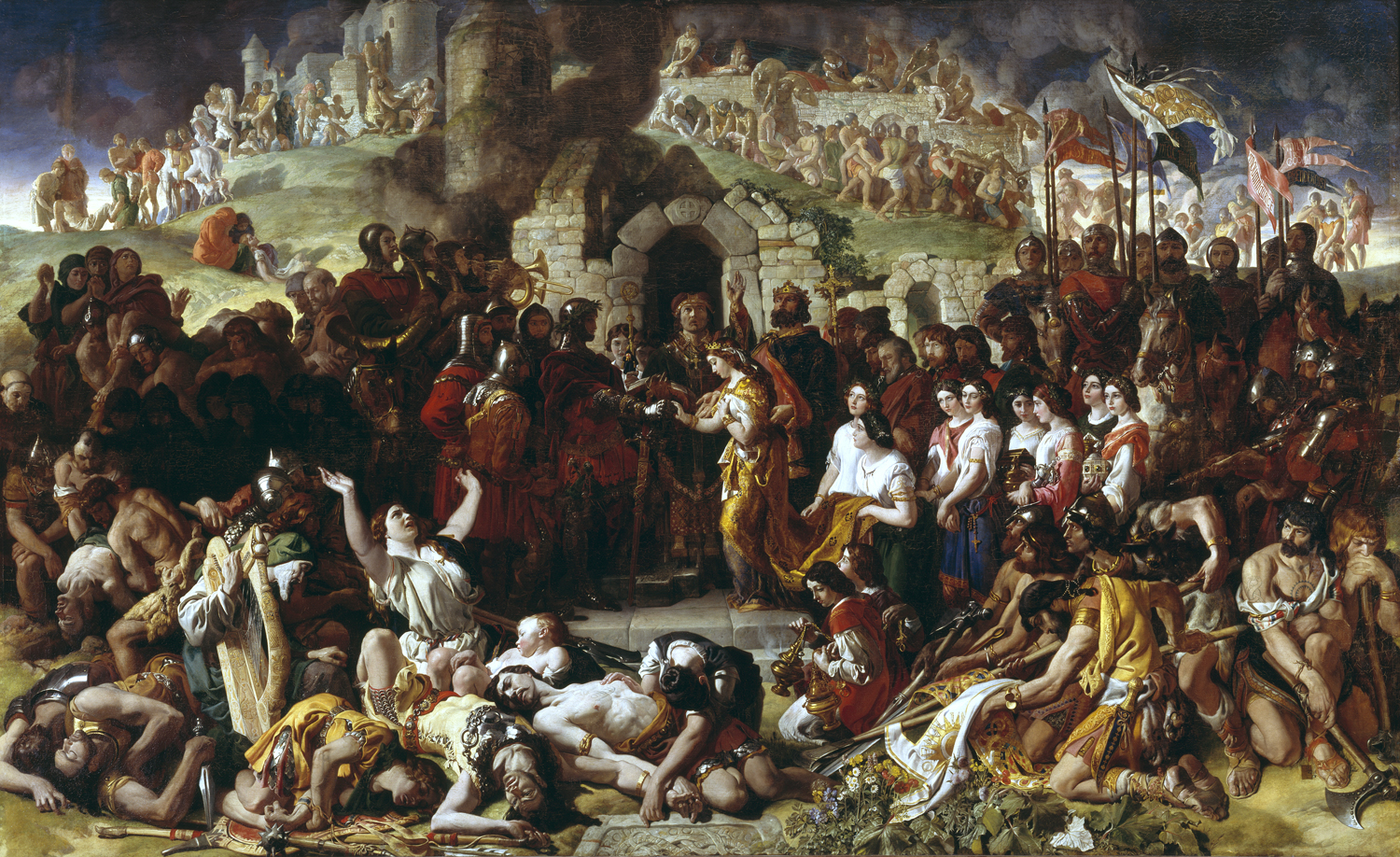 The marriage at Waterford in 1170 of the Norman military adventurer Richard de Clare, known as Strongbow, and Aoife the daughter of Dermot McMurrough, King of Leinster is seen as representing the formal establishment of a Norman foothold in Ireland, and is viewed by many as the first steps towards British rule in Ireland.

The interpretation of this monumental historic painting has shifted and changed over time. This is a testament to the allegorical ambiguity that Maclise used to depict these post-battle nuptials. The design for this painting was originally intended to be part of a series celebrating the British Empire in the Houses of Parliament.

At the time, Maclise was one of the leading proponents of romantic medievalism. Romantic medievalism celebrated Britain as a mixed nation, with the indigenous cultures (in this case Irish) absorbed through Norman strength, represented here by powerful and dignified figures in armour. Some suggest that even though Maclise was painting this for the Houses of Parliament, he may have had a subliminal Irish patriotic message.

The defeated Irish in this painting were viewed as primitive barbarians in Maclise’s time. However, they have come to represent aspects of Irish heritage and a wounded nation remaining strong under British rule. 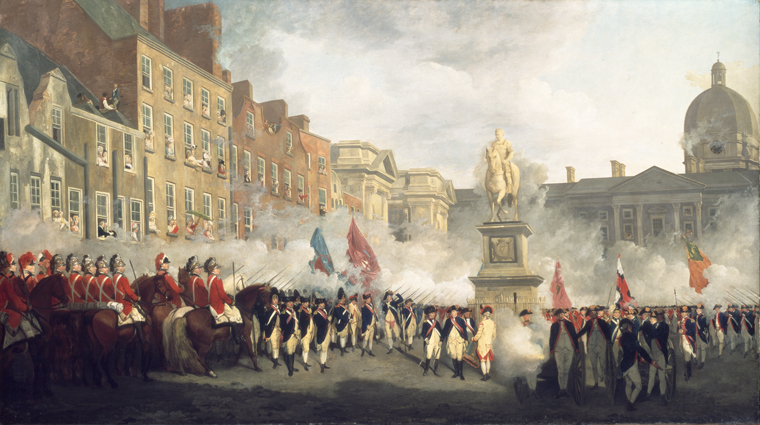 The Volunteer Movement was formed by the Protestant upper classes and existed from 1778 to 1784. The movement’s original intention was to form an army of local regiments to defend Ireland from possible invasion. However, over time they were able to support the Irish parliament and gain economic and legislative power from Britain.

In 1779, the celebration of King William III’s birthday by the Dublin Volunteers was a colourful occasion. One thousand men armed with weapons for ceremonial purposes, from shopkeepers to the 2nd Duke of Leinster, their colonel, gathered in the centre of Dublin around the freshly repainted statue of the king on College Green, and volleys were fired by two cannons. Do you get a sense of size of the crowd from this painting? Has Wheatley captured the atmosphere of this scene?

Princess Daschkaw, Lady of Honour to Catherine the Great of Russia, is one of the few figures identified in a published key. Can you see her leaning out the window on the left wearing a red sash?

When you look closely at the painting, do you think the small portraits are accurate? Wheatley was present in College Green that day, a new arrival from London, fleeing debt collectors. Can you think of a modern visual equivalent? A documentary? A news report? 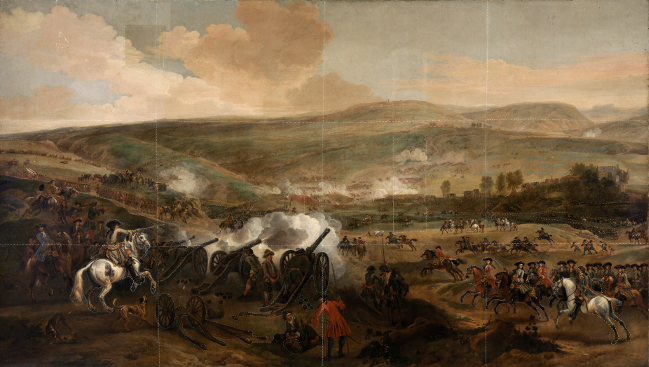 This panoramic landscape painting depicts the battle between King William III, who became king in 1689, and the deposed King James II who was fighting to regain his throne, at Oldbridge, on the border of counties Meath and Louth on the 1 July 1690. The point of view is from the Williamites' side of the battle; they were based on the high ground north of the River Boyne, looking southwards towards where James II and his troops were based.

This was the largest military engagement in Ireland’s history, with c.25,000 Jacobites facing c.36,000 Williamites. The foreground is filled with Williamite troops and their weaponry. Can you spot William III? He is on the right on the bay horse (brown with black spots). He wears a blue-grey coat with the Order of the Garter insignia visible on his chest. He raises his sabre, surrounded by the Dutch homeguard.

James II lost, fleeing to France after the battle. His army advanced to Limerick, however, in the South of Ireland, before being defeated at the Battle of Aughrim a year later. The overall casualties from the Battle of the Boyne were not as high as other battles: there were approximately 1,500 killed or seriously injured out of around 61,000 troops.