Through a Lens tour: Family Favourites 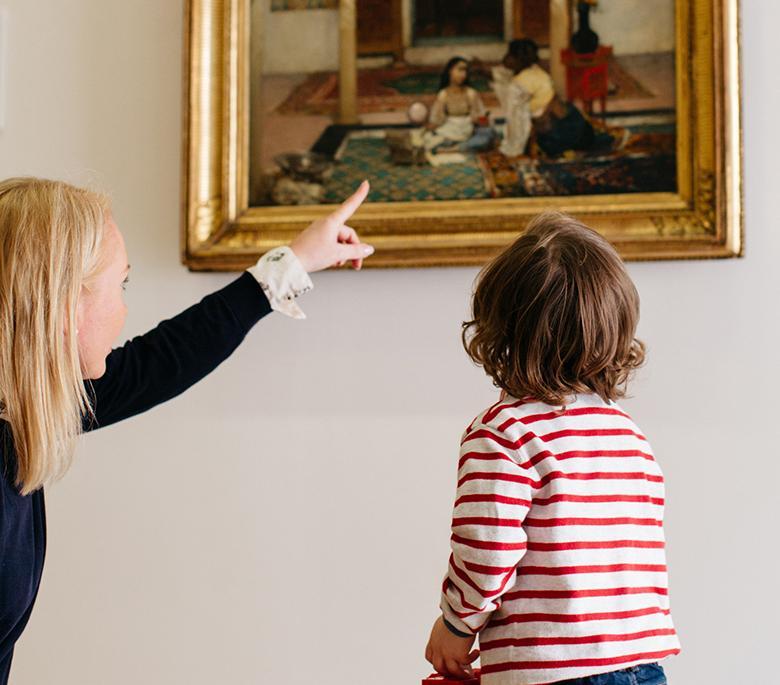 As you wander through our galleries, look out for these paintings and discover some of the highlights of our collection in a fun and engaging way! We hope that these artworks will get everyone exploring and talking on your visit to the Gallery.

We have chosen very different works, from different times, in various styles, so that there is lots to discover. Questions in each entry will encourage everyone to use their imaginations and look more closely at art.

Want to learn more? Follow the links for more about each artwork and other related projects. 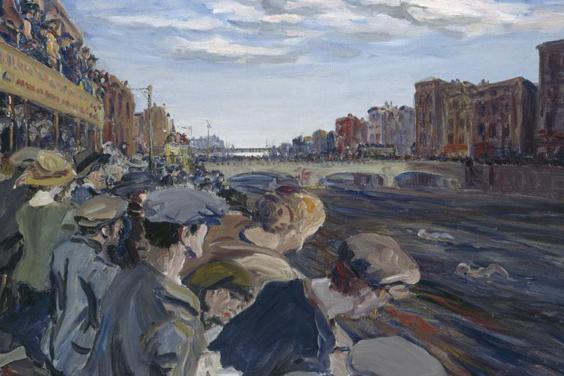 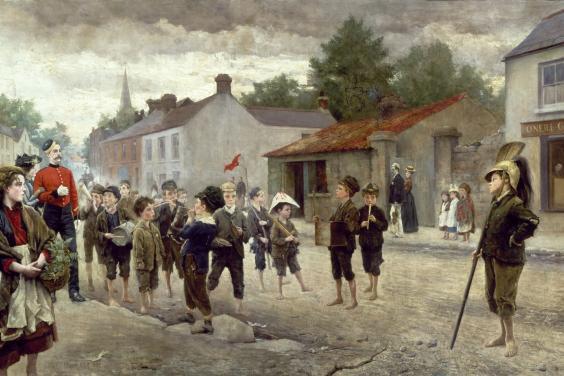 Yeats has painted Dublin’s annual Liffey Swim, a race that has been running since 1920. Thirty-four swimmers took part in the Liffey Swim in 1923, which started at a Guinness barge at Victoria Quay and finished a mile and a half downriver. Would you swim in the Liffey?

Yeats was awarded a silver medal for his portrayal of this unique sporting event at the 1924 Olympic Arts Competition in Paris, which was part of the Olympic Games. We have the medal in our collection here at the Gallery.

Can you see the character in the brown fedora hat facing slightly towards us? This may be the artist himself, and the woman wearing the elaborate yellow hat could be his wife Cottie.

Yeats used fast brushstrokes and bright colours to express emotions in his work.

This picture is set on the main street in Leixlip, County Kildare. A soldier and the young lady he is with are being followed by a group of children. What are the children doing?

The children are pretending to be a military band with real and improvised instruments.

On the right hand side of the painting, the would-be drum major, leader of the marching band, is wearing an actual helmet from the regimental band with a black horse-hair plume.

Military Manoeuvres is an excellent example of everyday life painted on a large scale. Pictures like this were popular throughout Europe at the time, especially if there were children in them. Moynan was studying medicine in Trinity College Dublin when he left to become a full-time artist.

It was a blacksmith’s. The glow in the window is coming from the blacksmith’s forge where the metal is heated to melt it down and reshape it. Do you know what a blacksmith did? A blacksmith made and fixed objects from metal. Their work was very important at the time, and there would have been a blacksmith in every town and village. 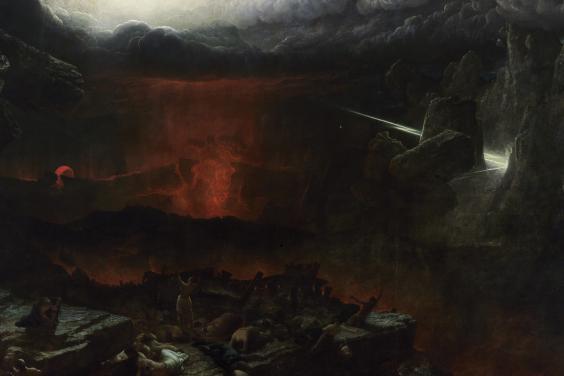 Francis Danby The Opening of the Sixth Seal 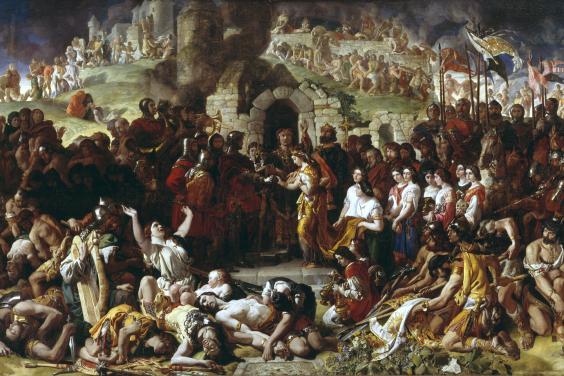 Daniel Maclise The Marriage of Strongbow and Aoife

This is a very dramatic painting! What’s happening here?

This illustrates one of the stages of the end of the world as described in the Book of Revelations (6:12–17). In this Bible story, God opens the sixth seal on a scroll and the earth is torn apart.

Can you see each of these stages from the Bible?

Can you see one of the few standing figures in the painting? The man standing with his back to us in the centre of the painting is an enslaved person set free at the end of the world.

Millions of people from Africa were forcibly removed from their homes, and shipped across the Atlantic Ocean in conditions of great cruelty between 1500 and 1900. They were forced to work but received no pay and had no freedom. European countries, including Britain, exploited enslaved people and profited from their labour.

Danby opposed slavery and used this main figure to highlight the inequality of the slave trade. This caused quite a scandal. Someone even tried to cut the enslaved person out! The canvas was repaired but you can still see the knife marks if you look closely. It is not possible to fix the knife marks entirely. Do you think the knife marks remind us of the brutality of slavery?

The slave trade stopped in 1807 in Britain but the bill for the abolition of slavery itself was not passed until 1833. Illegal slave trading continued for decades, and slavery in America didn’t end until 1865. The consequences of the slave trade are still felt today, with most Black Americans experiencing social and economic discrimination and disadvantage. What does it mean to be free? How does this painting make you feel?

This is the biggest painting in the Gallery.

This painting shows the wedding at Waterford in 1170 of the Norman military adventurer Richard de Clare, known as Strongbow, and Aoife, the daughter of Dermot McMurrough, King of Leinster. It was an important historical event. It is seen as the moment when the Normans’ invasion of Ireland began. The Normans were Vikings or Norsemen, and their descendants, who settled in Northern France and (in this case) in England. Having lost his lands to rival lords, McMurrough asked Strongbow to help him to get his land back in return for his title and lands after his death, and the hand of his daughter once the battle in Waterford was over.

This was painted for the Palace of Westminster in London, where the Houses of Parliament are. Maclise was asked to paint how Ireland was conquered by the Anglo-Normans. He painted the victorious Normans and the defeated Irish but also included elements that seem to support the Irish side: Strongbow puts his foot on a fallen Celtic cross; King Dermot looks on slightly shocked at what he has done, a frail harpist slumps on his instrument (the strings are broken); the defeated Irish lie dead in the foreground. 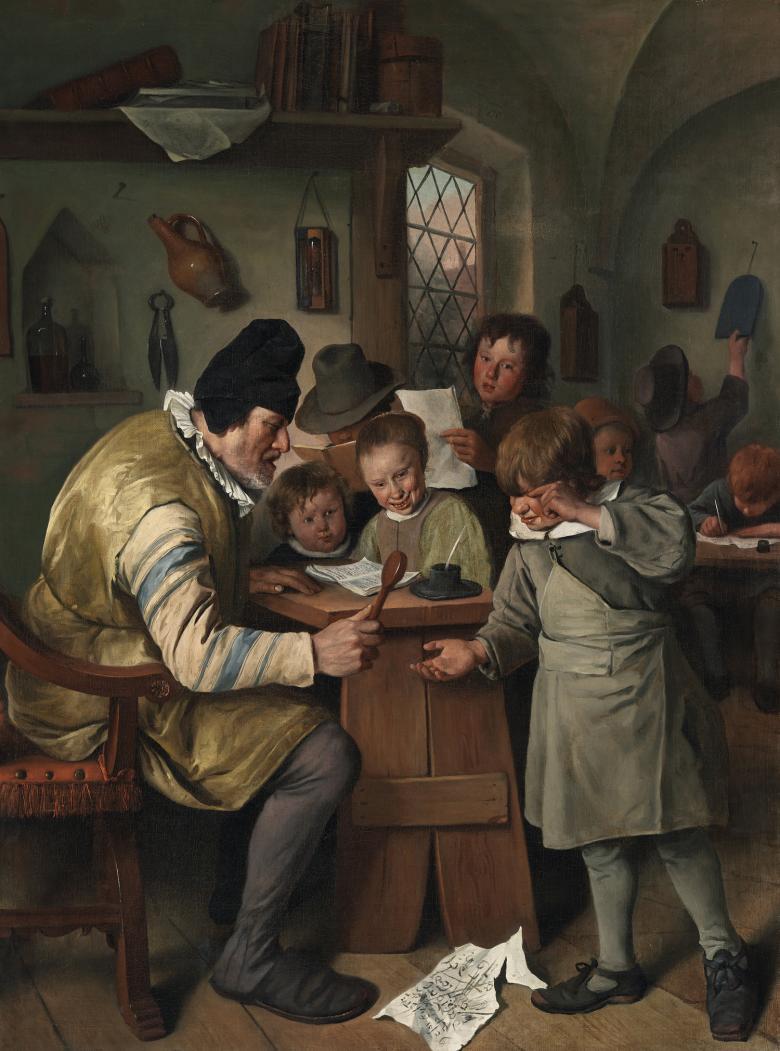 This painting by Dutch painter Jan Steen is of a classroom in Holland in the 1600s.

Teachers often had to teach lots of different age groups at once as there may have only been one school per village and only a few teachers in each school.

The artist painted his own three children into this painting. His daughter, Catherina, is the girl in front of the teacher.

The other two are the boys on the right. The boy being punished is his son Cornelius and the tall boy holding the paper is Johannes.

In this painting the teacher’s clothes are meant to be old-fashioned and are painted that way to make him look foolish. Teaching was not a good job to have in Jan Steen’s time. 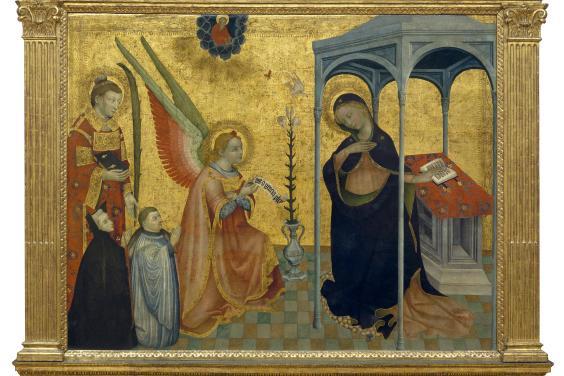 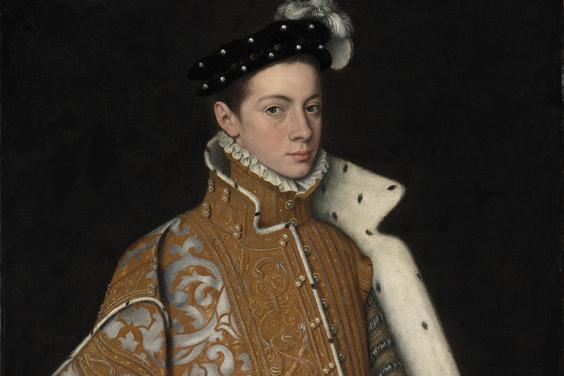 When artists paint religious figures they often use certain symbols to make each person recognisable to the viewer.

It is the Angel Gabriel, who is kneeling in front of a woman in dark blue.

Her gold halo, the colour of her robes and the lilies in the centre of the painting are symbols that the artist is using to tell us that this is the Virgin Mary, mother of Jesus. The Angel Gabriel is telling her that she will have the baby Jesus soon.

The two smaller figures on the left are the people who paid for the painting. They are smaller because they are not as important as the religious figures. The man behind them is Saint Stephen. We know it is him by his robes, the book in his hand, the palm leaf in his other hand (which shows he was a martyr, that he died for his belief in God) and the stone on top of his head.

This represents how he died. He was stoned to death.

It's God in the clouds. He is sending down two gifts to the Virgin Mary.

The first is a dove, the symbol of the Holy Spirit. The second is a tiny baby Jesus kneeling on a cloud being sent by God.

THIS PAINTING IS NOT ON DISPLAY

Sofonisba Anguissola came from a very artistic family. She and all five of her sisters became painters. She was the most successful. In 1559 she was invited to become a lady-in-waiting, a female personal assistant, to Queen Elizabeth of Valois in Madrid, as well as the official court painter. This was a great honour.

She was a very skilled portrait painter. Can you tell that from this portrait? She was great at capturing exactly what the person looked like and the delicate detail in their clothing.

This portrait was the first work by a female artist in the Gallery’s collection, but this happened accidentally. Art historians thought it was by a male artist known as Alonso Sánchez Coello. They later discovered it was by Anguissola. Have you seen work by any other female artists on display in the Gallery? Look out for them as you go through the rooms. 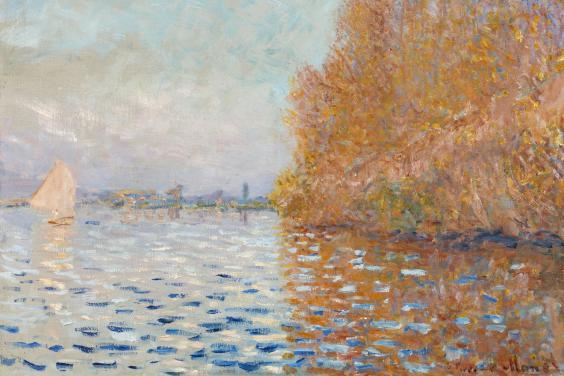 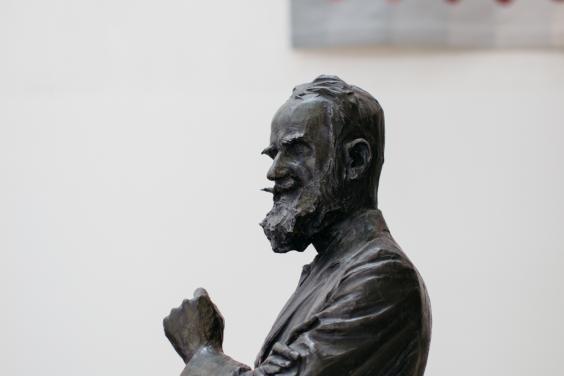 Claude Monet was part of a group of painters called the Impressionists. They wanted to paint quickly to capture the atmosphere in nature. To do this they painted outdoors, or ‘en plein air’. What do you think are the good and bad parts of painting outside? Monet painted this scene from his boat on the River Seine, just outside Paris, that he had turned into a floating artist’s studio.

Monet used two layers of paint to capture the water at the bottom of the painting. Look closely and you will see that he painted the reflection first. He uses fast white and blue brushstrokes to make it look like the waves are skipping across the surface of the water.

Sculpture is a form of art that is three dimensional, meaning it is not flat. Sculpture can be small or large. This statue of George Bernard Shaw, who was a writer and a major supporter of the Gallery, was design to be viewed in the round, which means it can be viewed from all sides. Have a walk around it and check out the detail in Shaw’s suit and how he stands.

It's made of bronze, which is a type of metal.

The bronze has to be liquid, and has to be poured into a mould. But how is the mould made?  It takes a very long time and has a lot of steps. Here is a breakdown of all 10 steps!

As you can see bronze sculpture takes a long time to make. Does that make you look at this sculpture a little differently? What makes you say that?