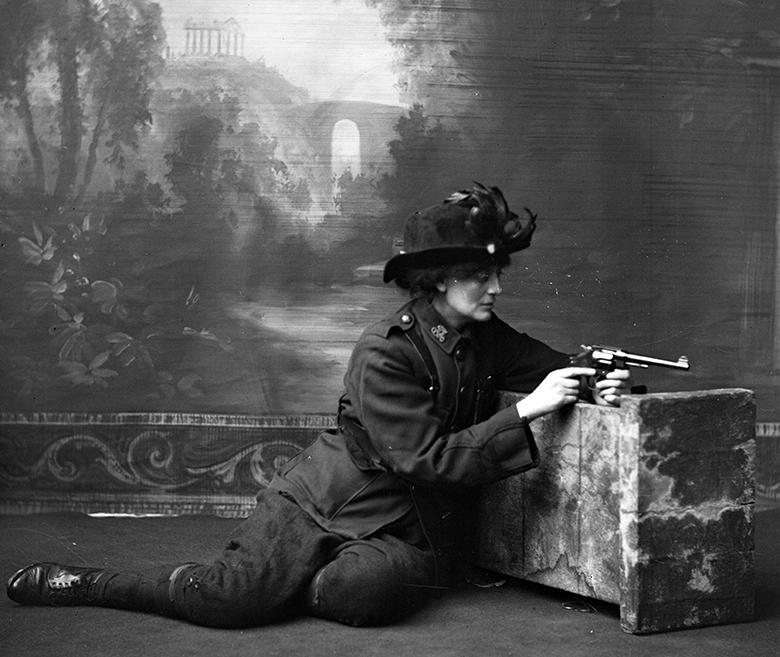 Countess Constance Markievicz in uniform, kneeling against a studio prop holding a gun, studio. Image courtesy of the National Library of Ireland.
Credit

Markievicz: Portraits & Propaganda aims to broaden understanding of a familiar but mysterious figure

Artist and aristocrat, prisoner and parliamentarian, suffragette and soldier. These are just some of the sides to Constance Markievicz, née Gore-Booth, explored in the National Gallery of Ireland’s new exhibition, Markievicz: Portraits & Propaganda. Opening on Saturday, 27 October 2018, the exhibition offers a nuanced picture of Markievicz through photography, painting and illustration. The exhibition, in collaboration with the Houses of the Oireachtas, encompasses the centenaries of the parliamentary vote for women in Ireland and the first Dáil, of which Markievicz was an elected member.

Items on display are drawn from the Gallery’s own collections, as well as the holdings of the National Museum of Ireland, National Library of Ireland and Dublin City Gallery The Hugh Lane. Pieces are juxtaposed to demonstrate the breadth of Markievicz’s representation over time, and their different media.

The exhibition spans a wide time period and includes an early portrait of Markievicz – a double portrait of her and her sister Eva Gore-Booth, at their family home in Lissadell, Co. Sligo, by Sarah Purser – as well as a painting of Markievicz on her deathbed, by her husband Casimir Dunin Markievicz. Other pieces include a photo of Markievicz dressed as Joan of Arc, taken from a series of tableaus of powerful women from history, and one in which she appears in Celtic Revivalist costume.

In recognition of Markievicz’s status as the first woman elected to Dáil Eireann, the exhibition has received support from the Houses of the Oireachtas.

Ceann Comhairle, Seán Ó Feargháil said: “The timing and content of this exhibition is beautifully poised towards the end of the year of suffrage and looking forward to the centenary of the first Dáil. Countess Markievicz played a pivotal role in both of these events. Uniquely, she embodies the transition from militancy to the path of civil administration, being a member of two parliaments and a Minister in the first Irish Government in 1919 – a unique set of achievements unmatched in subsequent decades."

“As Ceann Comhairle, I am delighted that the Houses of the Oireachtas have been able to support this exhibition, which is a fitting tribute to one of the key historical and political figures from the era of the foundation of our state.”

Commenting, exhibition curator Donal Maguire said: “For many, Constance Markievicz is at once a familiar and mysterious figure. She is of undeniable and widely recognised cultural and political significance, given her role in the history of modern Ireland, but retains an air of intrigue to this day. In curating this exhibition, my objective was to expand people’s understanding of Markievicz by showing the diversity of her image over time, an image that she endeavoured to manage."

“Constance Markievicz went to art school in London and Paris, and was aware of the power of the visual medium. Despite facing challenges on the basis of her class and gender, she understood the power of self-presentation and sought to reshape how she was viewed, empowering herself through the moulding of her own public image. Visitors to the exhibition will discover an individual who sought to control her public image and actively shape how she was viewed by different audiences. People will leave with a more rounded sense of Markievicz, one that includes but ultimately transcends her role as a revolutionary leader.”

The exhibition is part of a series of annual exhibitions by the Gallery's ESB Centre for the Study of Irish Art (ESB CSIA) and follows Aftermath: the War Landscapes of William Orpen, 2017. The ESB CSIA is one of the Gallery's research facilities, housing one of the most important collections of library and archival material associated with the history of Irish art.

Commenting, ESB chief executive, Pat O’Doherty said: “ESB has been involved with the Centre for the Study of Irish Art since it was founded in 2002, and we are very proud to support events like these that not only promote the visual arts in Ireland, but also provide insights into moments of historical significance that are still relevant to Irish society today.”

Markievicz: Portraits & Propaganda opens at the National Gallery of Ireland on Saturday, 27 October 2018 and runs until Sunday, 10 February 2019. Admission is free. A programme of events will complement the exhibition, including a series of performances by eminent Irish artist, Amanda Coogan.