Visit this free exhibition to discover the 24 portraits shortlisted for this year's Zurich Portrait Prize. The annual competition showcasing contemporary portraiture is open to artists from across the island of Ireland, and Irish artists living abroad.

This year's winner, Salvatore of Lucan, was revealed in a special online ceremony on Tuesday 30 November. He will receive a cash prize of €15,000 and will be commissioned to create a work for the National Portrait Collection, for which he will be awarded a further €5,000. Two additional awards of €1,500 were awarded to highly commended artists Vanessa Jones and Tom McLean. We recorded the event, so you can watch a video of the awards ceremony. You can also scroll down this page to see the winner and full shortlist.

The exhibition will go on view in Crawford Art Gallery, Cork, from 23 April until 17 July 2022.

We are now accepting entries for the Zurich Portrait Prize 2022. Find out how to enter the competition this year.

Winner of the Zurich Portrait Prize 2021 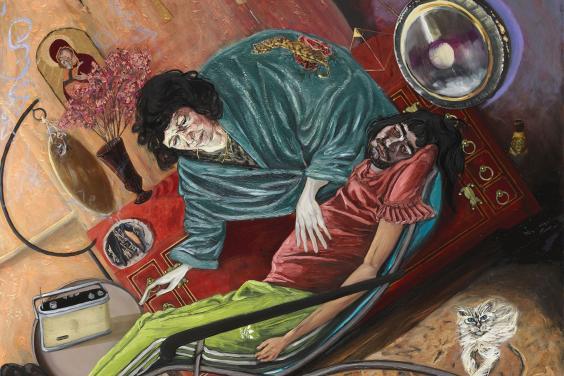 Read more about the winning portrait

Meet Salvatore of Lucan, the winner of this year's Zurich Portrait Prize, and the two artists who were highly commended by the judges: Vanessa Jones and Tom McLean.

We are delighted to have Eamonn Doyle, Róisín Kennedy, and Seán Kissane on board as this year's judging panel for the Zurich Portrait Prize.

Born in Dublin in 1969, Eamonn Doyle studied painting and photography at college, graduating in 1991. He spent much of the next two decades producing and publishing music, during which time he also founded the Dublin Electronic Arts Festival alongside the record labels D1 Recordings and Dead Elvis. He returned to photography in 2008. His debut photo-book, i (2014), was described by Martin Parr as ‘the best street photo-book in a decade’. This was followed by ON (2015), and the award-winning End. (2016), which together with i, became known as his Dublin trilogy, culminating in a ground-breaking immersive exhibition at Rencontres d’Arles 2016. Though most of this work was produced in and around the Dublin city centre location where he has lived for over twenty years, Eamonn’s most recent bodies of work have taken him to the wild Atlantic coast of Ireland and to the volcanic landscapes of Extremadura in Spain, K (2018), and back to his surburban home in south Dublin, O (2020). Eamonn still lives and works where it all began, just off Parnell Street in Dublin, with the D1 Recordings studio still operating from the basement. Gallery representation: Michael Hoppen Gallery, London.

Róisín Kennedy is an art historian and curator. She is Lecturer in the School of Art History and Cultural Policy at University College Dublin. She is former Yeats Curator at the National Gallery of Ireland. Her research focuses on art and politics, the critical reception of modern art in Ireland and on censorship. She is co-editor and contributor to Harry Clarke and Artistic Visions of the New Irish State (Irish Academic Press, 2018) and Censoring Art. Silencing the Artwork (I.B. Tauris, 2018). She has edited an anthology of writings on Irish art, Sources in Irish Art 2. A Reader, with Fintan Cullen which will be published by Cork University Press later this year. Her book Art and the Nation State. The Reception of Modern Art in Ireland has just been published by Liverpool University Press.

Seán Kissane is Curator of Exhibitions at the Irish Museum of Modern Art (IMMA), Dublin. He describes his practice as ‘curating the edges’, producing deeply researched exhibitions focused on the work of female and queer artists whose work has been critically neglected. These projects have included major touring exhibitions such as the retrospectives for Derek Jarman, Leonora Carrington, and Mary Swanzy. In 2016, he presented the critically acclaimed ‘Patrick Hennessy: De Profundis’, the first queer reading of Irish modernism. He is currently a PhD candidate at Gradcam, TU Dublin, undertaking research into queer art exhibited in Ireland during and after the Second World War examining how some Irish artists presented divergent images of masculinity that countered prevailing orthodoxies.