Irish Women Artists from the Archives

The Gallery's ESB Centre for the Study of Irish Art and Yeats Archive contain rich archival collections which tell the many stories of Irish women artists of the early twentieth century.

Read on to discover the important role women played in the development of modern art in Ireland.

In the early twentieth century, the majority of women studying or practising art in Ireland shared similar social backgrounds. They came from a relatively privileged sector of Irish society, predominately upper-middle-class professional or mercantile families, and artistic pursuits formed part of their education.

Often rejecting contemporary social conventions, these women pursued their own goals as artists, educators and entrepreneurs. For such women, their privileged social and financial backgrounds played a central part in facilitating their careers. 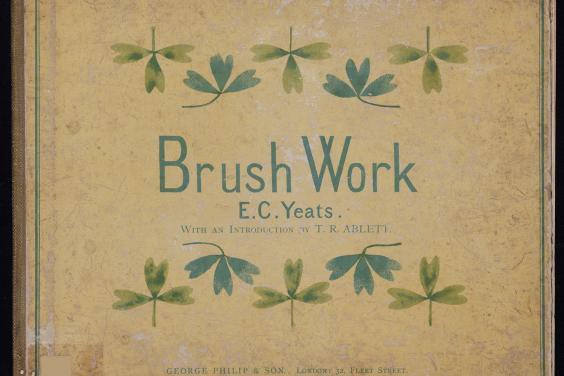 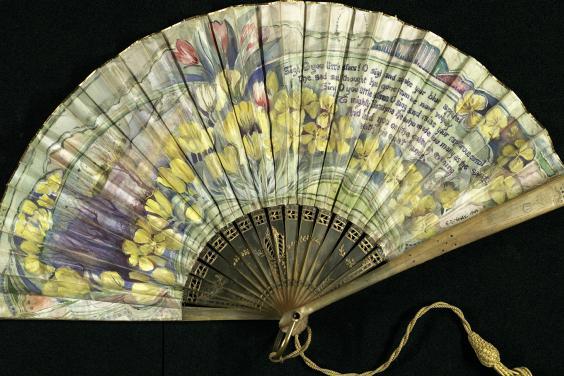 An educator, designer and landscape painter, Elizabeth trained as an art teacher as well as a printer. She was a member of designer William Morris’s circle in London, before her family returned to Dublin in 1900. She was a founder member of the Dun Emer Guild, and the first commercial printer in Ireland to work exclusively with hand presses.

The Gallery's Yeats Archive includes some examples of Elizabeth's artistic output, including a hand-painted fan (above) featuring a design of pansies and crocuses superimposed on a landscape, and an inscription taken from the poem Anashuya and Vijaya by William Butler Yeats. A copy of Brush Work (1896), her watercolour manual for children is also part of the collection.

Women benefited from the gradual opening up of art institutions and increased access to formal art training in the latter half of the nineteenth century. The Royal Dublin Society, a precursor to the Dublin Metropolitan School of Art, admitted women from 1849.

In 1893, women were permitted to attend the Royal Hibernian Academy (RHA) schools. Enrolment figures for the period from 1895 to 1905 highlight the number of students who attended the RHA schools, with an average of six men and seventeen women during each academic year.

Access to formal art education, in particular classes in life drawing and human anatomy, were essential for women’s artistic training. 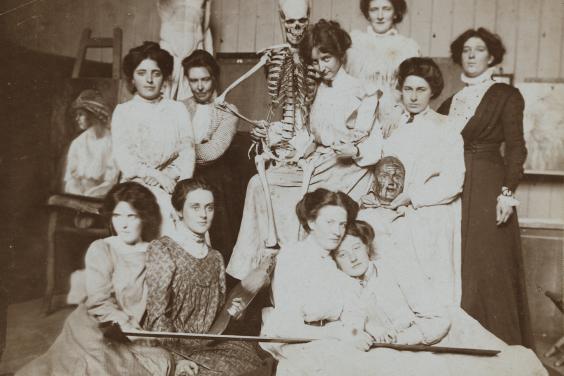 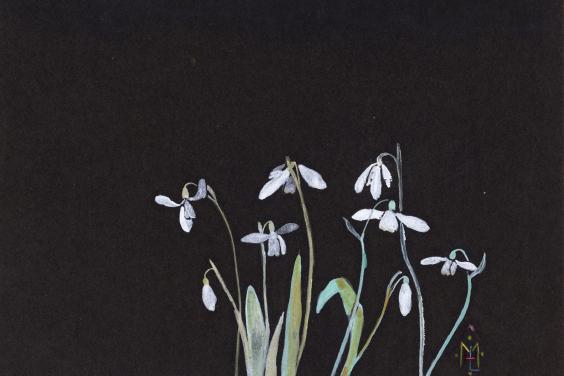 As a child, she attended Elizabeth Corbet Yeats's art class. The Gallery holds a watercolour painting of snowdrops (above) that she painted in the class when she was aged fourteen.

Yeats trained in the RHA schools from 1933 to 1936, and worked as a stage designer with the Abbey Theatre. She began painting full-time in 1941. For twenty years, from 1958, she designed many book covers for the Irish-language publisher Sáirséal agus Dill. 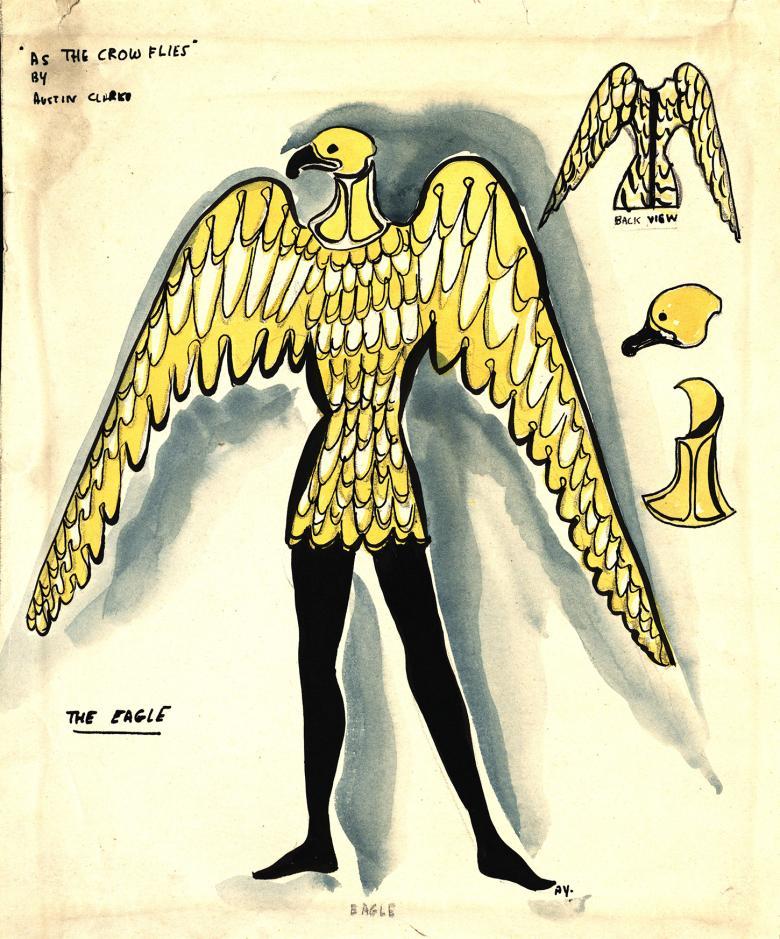 Jellett and Hone studied non-representational art under André Lhote and Albert Gleizes. In 1923, Jellett brought back her first cubist works to Dublin, and she is recognised as one of the first artists to introduce abstract painting to Ireland.

At the same time, Swanzy was creating and exhibiting figurative compositions that incorporated abstract elements associated with cubism and futurism. 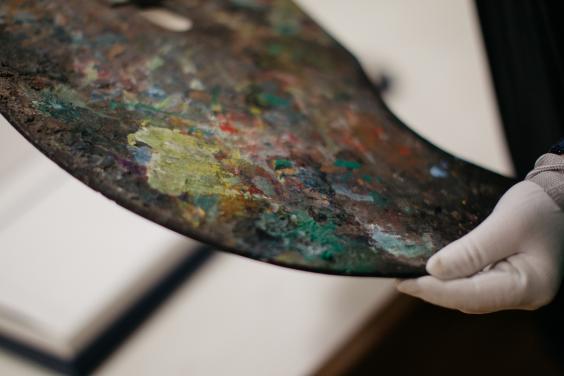 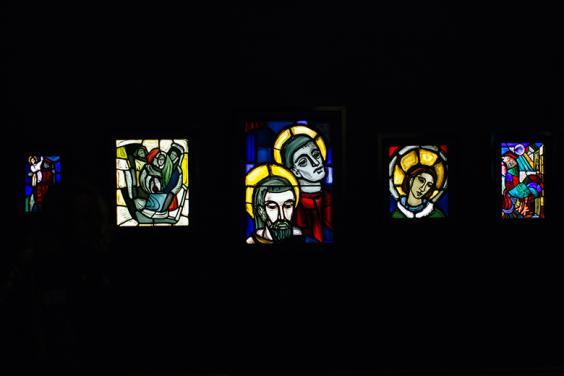 A landscape artist and one of Ireland’s first abstract painters, Swanzy painted in many styles reflecting her interests in cubism, fauvism, and orphism.

She studied at May Manning’s studio, the Dublin Metropolitan School of Art, as well as in Paris. Independent wealth allowed her to travel extensively to develop her practice and, in 1949, she was made an Honorary Member of the RHA.

The Gallery holds Swanzy's painting palette (above), last used in her studio in Blackheath, London.

A number of women were active in the establishment of art societies and exhibitions that enabled them and their peers to showcase their work. One of the most influential of these was the Society of Dublin Painters, founded in 1920. The Society aimed to provide an alternative public exhibition space due to the RHA’s continual resistance to displaying modern Irish art.

In 1923, Mainie Jellett exhibited Decoration, one of her earliest cubist works, at a Society exhibition. The painting was greeted with general antagonism by the art establishment; the influential critic George Russell described it as ‘a late victim to Cubism in some sub-section of this artistic malaria’.

Jellett continued to champion modernism in Irish art and, in 1943, she was a co-founding member of the Irish Exhibition of Living Art, one of the most significant exhibitions of contemporary Irish art until the 1970s. 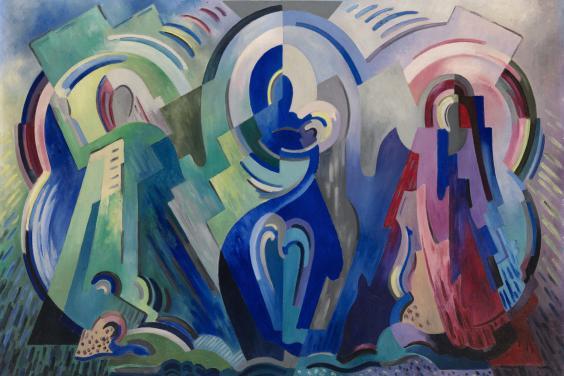 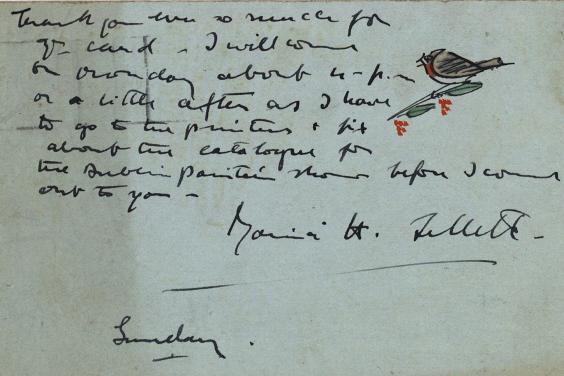 A painter and early proponent of abstract art in Ireland, Jellett studied at the Metropolitan School of Art in Dublin, the Westminster Technical Institute in London, and worked in Paris, where she encountered cubism. She was a leading figure of the modern art movement, and a co-founder of the Irish Exhibition of Living Art in 1943.

As both artists and entrepreneurs, women made significant contributions to the development of art cooperatives in Ireland. These focused on the professionalization of design and craft disciplines such as stained glass, embroidery, tapestry, and letter press printing. 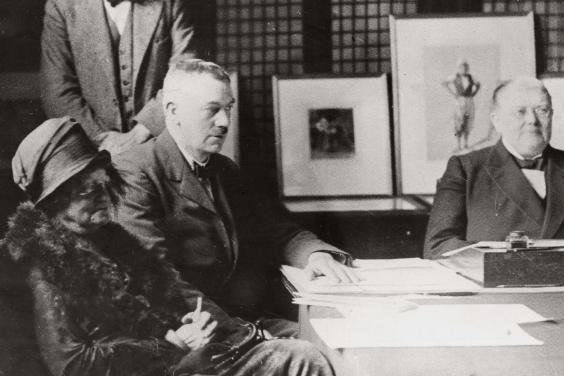 Sarah Purser, seated, with other members of the Gallery's Board, c.1925-35 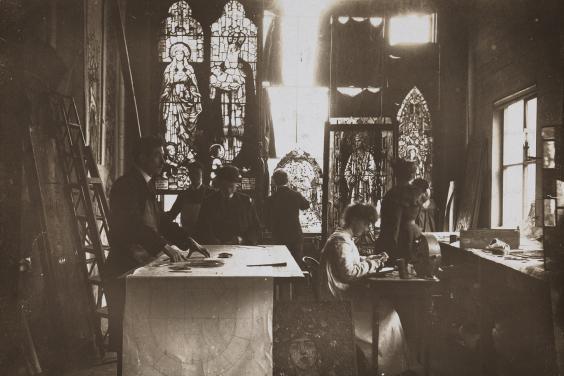 A portraitist and stained glass artist, Purser studied at the Dublin Metropolitan School of Art and in Paris, and exhibited in the RHA throughout her life. She was extremely active in the Dublin art world, and was a member of the Board of the National Gallery of Ireland from 1914 to 1943. 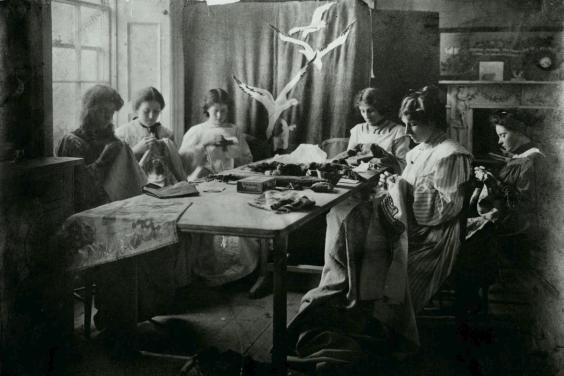 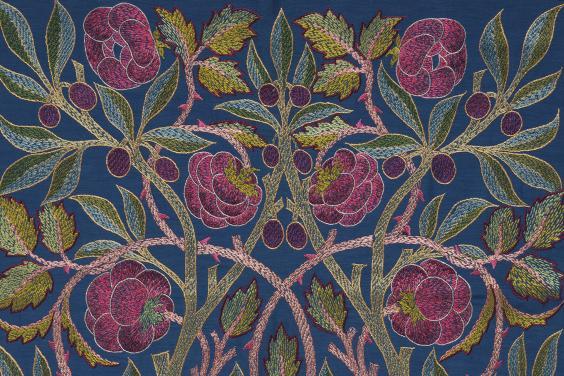 An embroiderer associated with the Celtic Revival, Lily Yeats studied and taught embroidery in the style propounded by William Morris, working under his daughter May in London. In 1902, she moved to Dublin to co-found the Dun Emer Guild and, in 1908, established the embroidery department of Cuala Industries.

The photograph above, from the Gallery's Yeats Archive, shows the interior of the embroidery workshop at Dun Emer Industries. Susan Mary is shown seated in the right foreground.

In 1902, Evelyn Gleeson, Elizabeth Corbet Yeats and Susan Mary Yeats founded the Dun Emer Guild in Dublin. This Irish female craft cooperative was based on the ideals and aesthetics of the English Arts and Crafts movement and the Irish Cultural Revival. The Guild, which was run by women and only employed women, specialised in printing, book binding, weaving and embroidery.

While her sister ran the Dun Emer Press, Susan Mary Yeats was responsible for the embroidery workshop which designed and produced ecclesiastical textiles such as church banners, vestments and altar cloths. In 1904, the cooperative gained international exposure at the Arts and Crafts Society Exhibition in St Louis, Missouri, where they exhibited needle work, cushions, and portieres made from Irish linen, wool and silk thread. 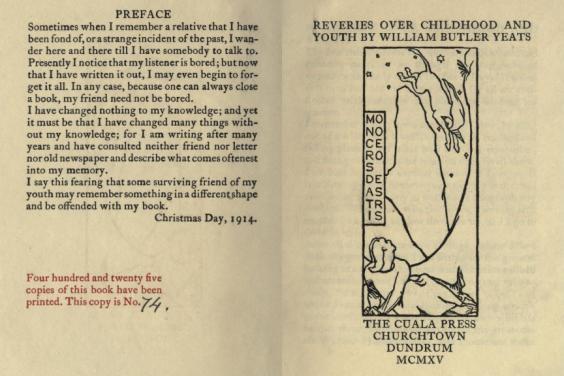 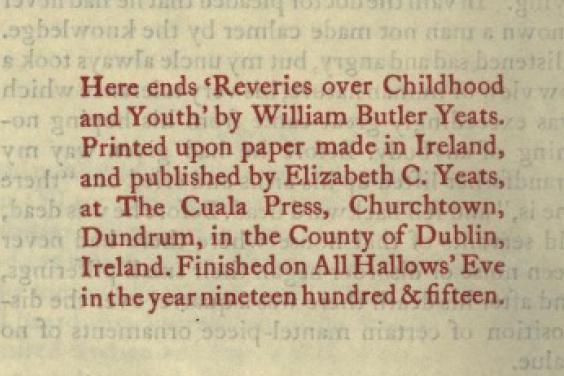 A further split from Gleeson and Dun Emer occurred in 1908, when the Yeats sisters left to set up Cuala Industries nearby in Churchtown, Co. Dublin. Susan Mary managed the embroidery workshop and Elizabeth established her private printing press, the Cuala Press.

Elizabeth published and printed over fifty books for the Cuala Press, concentrating on publishing new Irish literature, often by writers associated with the Irish Literary Revival, including her brother W.B. Yeats (above). She also produced an illustrated monthly series of Broadsides between 1908 and 1915, which were edited by her younger brother Jack B. Yeats.

Art critics, commentators and administrators did not always recognise women artists in the same way as their male counterparts. In 1922, Thomas MacGreevy, later appointed Director of the National Gallery of Ireland, observed, in an article in the Irish Independent, that some members of the RHA ‘apparently only titter at the idea of a woman artist’.

In 1924, over one hundred years after its establishment, the RHA elected Sarah Purser as its first female member. She was followed three years later by Margaret Clarke (1884–1961). Despite such challenges and low visibility, women played a key role in the development of modern art and the decorative arts in Ireland. 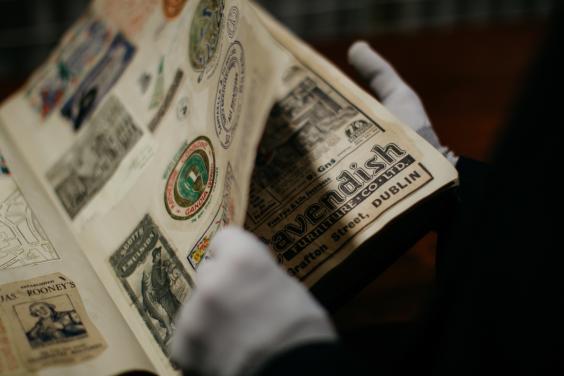 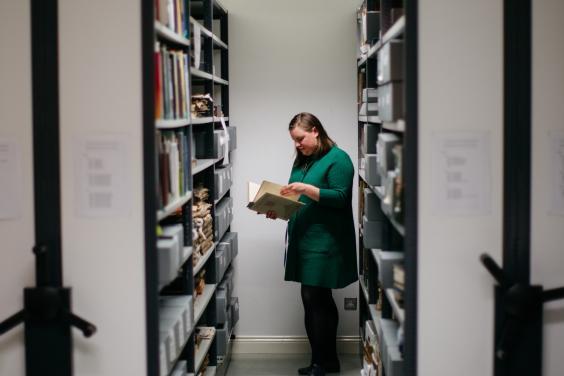 Visit the Library and Archives

Discover more about these women, and many others! The Gallery's library and archives are open to the public, but appointments are essential so that we can prepare the most appropriate material for your research interests.