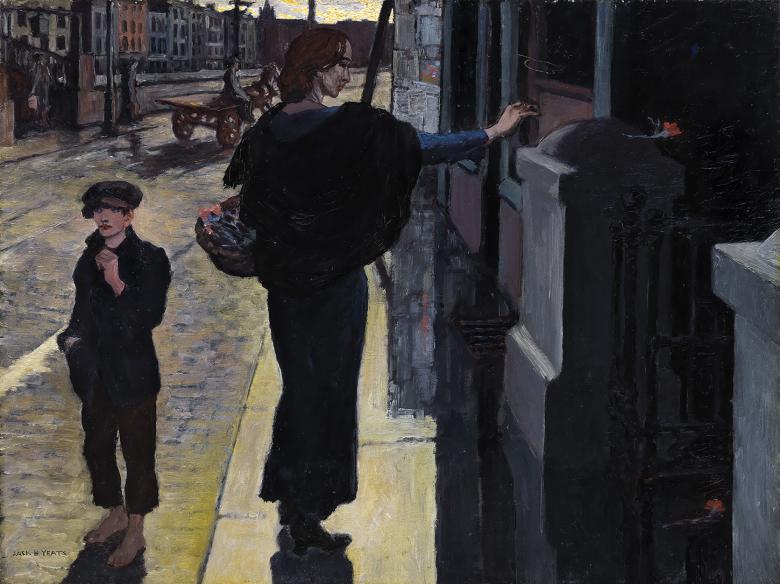 Iconic painting by Jack B. Yeats, Bachelor’s Walk, In Memory, becomes part of national collection at the National Gallery of Ireland.

Painting depicting 1914 scene now belongs to the people of Ireland, with support from the Government of Ireland.

A work by one of Ireland’s best-known artists, Jack B. Yeats, relating to an episode of huge social and political significance has become part of the national collection at the National Gallery of Ireland. Bachelor’s Walk, In Memory has been purchased by the Gallery with the special and generous support of the Government of Ireland and key contributions from several donors.

Bachelor’s Walk, In Memory depicts an incident in Dublin city centre in 1914 in which a detachment of the King’s Own Scottish Borderers opened fire on a crowd of demonstrators. Three people were killed (a fourth later died) and over 35 were injured. Earlier on the day in question, soldiers, and officers of the Dublin Metropolitan Police and Royal Irish Constabulary, had intercepted Volunteers and members of Na Fianna transporting a consignment of rifles and ammunition that had arrived at Howth on board the yacht The Asgard. News filtered back to Dublin, where a hostile crowd accosted the soldiers on their return to barracks.

Yeats painted just a handful of pictures that addressed contemporary politics or current affairs directly. Bachelor’s Walk, In Memory is one of the most striking and important of these. The artist did not witness the event but was evidently deeply affected by it. He visited the following day and based the painting on a sketch he produced on the spot. He noted ‘a bullet hole in shop window’ and recorded that ‘a few paces further towards O’Connell bridge flower girls had thrown flowers’. The painting was not seen publicly until 1922, when it featured alongside other works by Yeats at the ‘Exposition d’Art Irlandais’ in Paris. The work has been on long-term loan to the Gallery for the past twelve years. It has now been purchased by the Gallery with the support of the Government of Ireland and private donors. The acquisition of such an important political work during the Decade of Centenaries is particularly significant.

Minister for Tourism, Culture, Arts, Gaeltacht, Sport and Media, Catherine Martin TD, commented, “The National Gallery of Ireland and the people of Ireland were very fortunate to have the extraordinary work by Jack B. Yeats Bachelor’s Walk, In Memory on loan for public display. I am delighted that this remarkable and beautiful painting has now been acquired by the Gallery to be forever in the national collection and that we and the generations to come will always be able to enjoy this work.  I was pleased to provide support on behalf of the Government for this acquisition and I offer my congratulations and thanks to the Board and staff at the National Gallery who, along with their supporters, made this important acquisition possible.”

Bachelor’s Walk, In Memory is on display in the National Gallery of Ireland’s Millennium Wing. Entry to the national collection is free for all to learn and be inspired.

Information about the work: