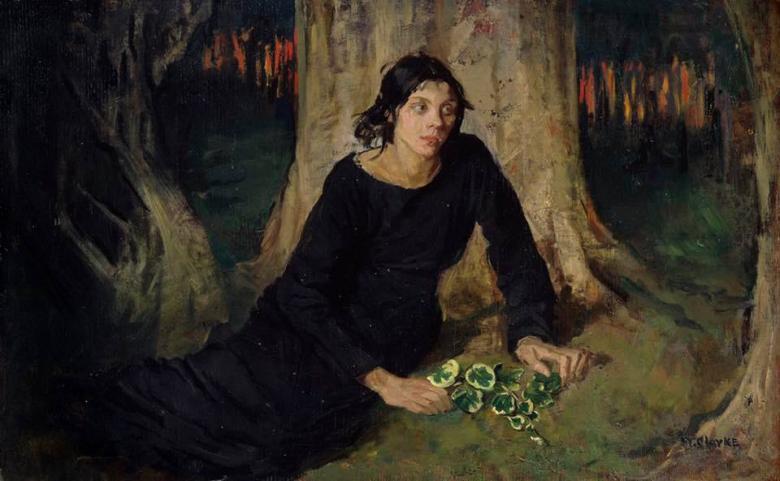 The National Gallery of Ireland's collection has lots of wonderful examples of artworks populated with characters from writing; from plays, poems, and mythology. Here, we take a look at just a few of them. 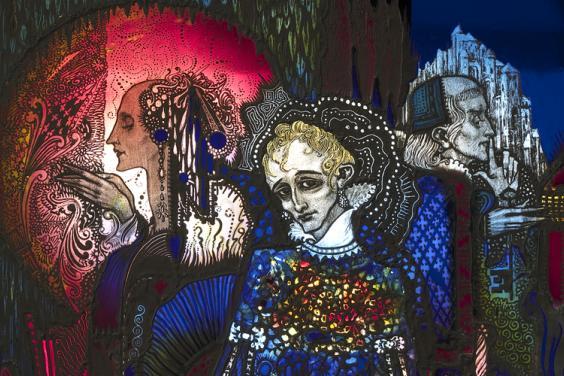 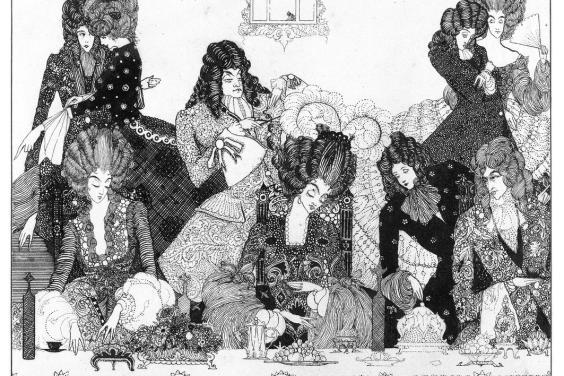 "Who said, "Where sleeps she now?
Where rests she now her head,
Bathed in eve's loveliness"? —
That's what I said."

The subject of Harry Clarke's 1917 stained glass panel, The Song of the Mad Prince, is derived from a poem of the same name by Walter de la Mare (1873-1956) included in his 1913 collection for children Peacock Pie. In Clarke’s panel, the prince, wearing exquisitely embellished, Elizabethan-style clothing, stands in front of his mother and father. Clarke experimented in the production of this work, etching and plating together two double pieces of glass of different colours to achieve a variety of colours and tones. Housed in a bespoke walnut cabinet by James Hicks, the panel was originally made for Thomas Bodkin, Clarke’s friend and patron and later Director of the National Gallery of Ireland.

"See fierce Belinda on the Baron flies
With more than usual lightning in her eyes;"

Clarke's wistful yet humorous illustrations of Alexander Pope's Rape of the Lock were commissioned by his early patron Laurence Ambrose Waldron. A mock-heroic poem in five cantos, Pope tells the tale of the seizing ('rape' comes from the Latin rapere, to seize) of a lock of hair from the heroine of the tale, Belinda, by her suitor, the Baron, and her efforts to retrieve it.

The illustration above is of the fifth and final canto. The artifice of 18th century manners is perfectly captured in the facial expressions and poses of the protagonists in this scene, exposing both Belinda's outrage and the Baron's remorse. A myriad of meticulously rendered detail is evident in the flamboyant costumes, which the art historian Kenneth Clark has described as 'ersatz 18th century'. Comparisons are often made with Aubrey Beardsley's rendering of Pope's poem, published in 1896. 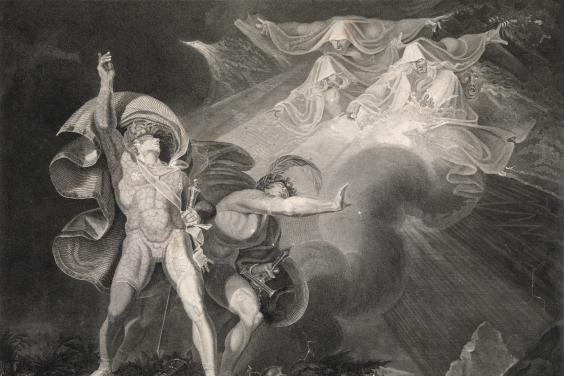 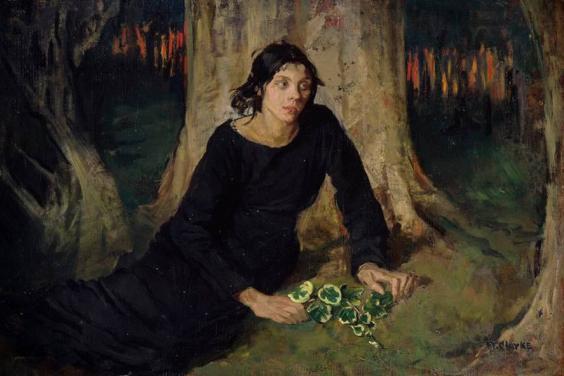 "The weird sisters, hand in hand,
Posters of the sea and land,
Thus do go about, about:"

The engraving above illustrates Act 1, Scene III of William Shakespeare's Macbeth: Macbeth and Banquo have come across the three witches on the heath, who tell Macbeth that he will be the Thane of Cawdor, and eventually, King.

During the eighteenth century, Shakespeare’s work experienced a popular revival associated with growing interest in British nationalism together with increased levels of literacy and advancements in printing techniques. New academic and illustrated editions were published including Boydell’s Shakespeare Gallery. The idea for a Shakespeare Gallery was hatched at a dinner given by publisher and print-seller John Boydell in 1786. The project consisted of illustrated editions, original paintings, and a folio of prints depicting Shakespeare’s plays. This engraving by English artist James Caldwall (1739-1819) is after the painting by Henry Fuseli (1741-1825) which was commissioned by Boydell for his Shakespeare Gallery in Pall Mall.

The tragic character of Ophelia, from Shakespeare's Hamlet, was a popular subject for artists, however Margaret Clarke departs from the conventional representation of her. While Ophelia was usually depicted either in the water, having drowned, or at the water’s edge, in Clarke’s picture she reclines in a stark, foreboding, woodland setting, dressed in plain, almost funereal attire. Looking dishevelled, distracted and wan, perhaps contemplating her fate, she is arguably more consistent with the character described by Shakespeare than the sylphlike, histrionic figures of the Pre-Raphaelites. Clarke has replaced the flowers that traditionally embellished depictions of Ophelia with a simple cluster of ivy, a plant with several telling iconographical associations, including fidelity, attachment, and immortality. 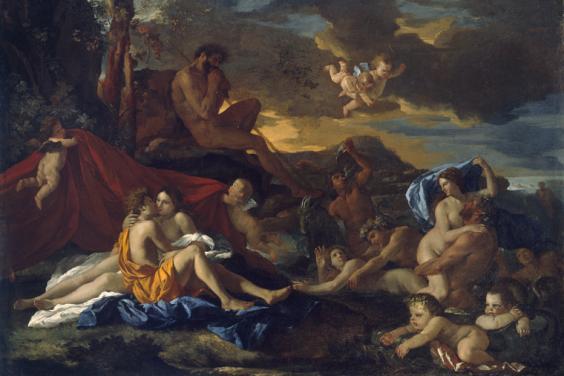 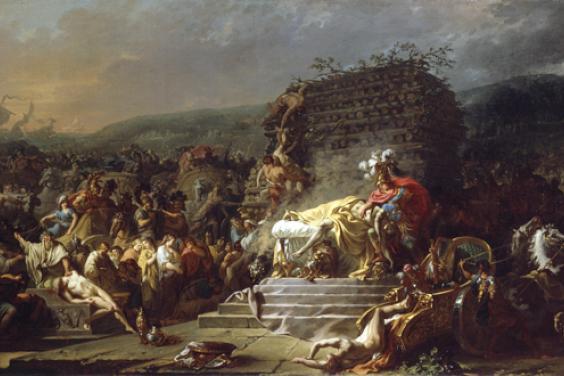 "Oh raise, fair nymph, your beauteous face above
The waves; nor scorn my presents, and my love.
Come, Galatea, come, and view my face;"

Nicolas Poussin's Acis and Galatea (1627-28) depicts scenes from a mythological story told in Ovid’s Metamorphoses. Ovid's epic poem, written in Latin hexameter, tells the story of the creation of the world, and continues chronologically up until the death of Julius Caesar. In Poussin's painting, the lovers Acis and Galatea embrace, while tritons and nereids play in the waves nearby. Putti shield the couple from Polyphemus (a one eyed giant) who sits on a promontory playing a syrinx. According to Ovid, Polyphemus became angry when Galatea did not reciprocate his love. He hurled a rock at Acis and killed him. Poussin presents the oblivious lovers in a golden light, but dark clouds hint at the tragedy to come.

"The two wept bitterly—Priam, as he lay at Achilles’ feet, weeping for Hector, and Achilles now for his father and now for Patroclus, till the house was filled with their lamentation." Translation by Samuel Butler, 1898.

Jacques-Louis David painted this large scale work while he was studying at the French Academy in Rome. He imagined scenes from  the final book of Homer’s Iliad. At the centre of the composition, Achilles (in a red cloak) mourns his friend Patroclus who was slain by the Trojan prince, Hector. Patroclus’s body is laid on a bier before a tall funeral pyre. To the right, is the corpse of Hector, which Achilles desecrated by ordering it to be tied to his chariot and dragged around the walls of Troy. At the left side are the 12 Trojan captives, who Achilles had sacrificed before Patroclus’s body was placed upon the pyre. The subject matter, style and scale of this work illustrate David’s serious ambition to master a Neo-classical style inspired by the antiquities he had studied in Rome.