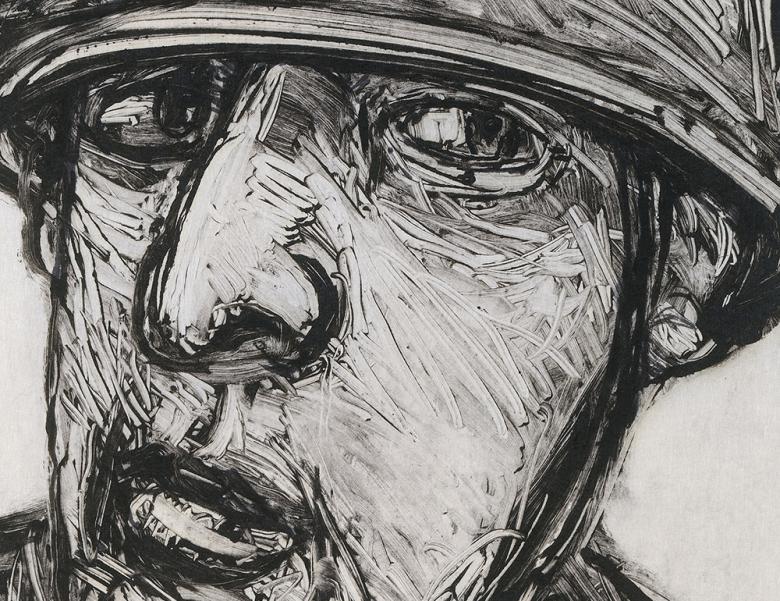 Minus their titles, these works intrigue and prompt questions—who were these people? what were they thinking? what were their experiences? Created over a 40-year period, these works, in a wide variety of print techniques, offer insights into the artist’s thought processes and allow us to explore the themes and topics that inspired him.

Here, curator Anne Hodge shares a selection of Wallace's 'heads'. Spend some time with these faces and see what thoughts and memories they evoke.

Who was this man? What do the bags under his eyes and furrowed brow tell us? Does he seem content? 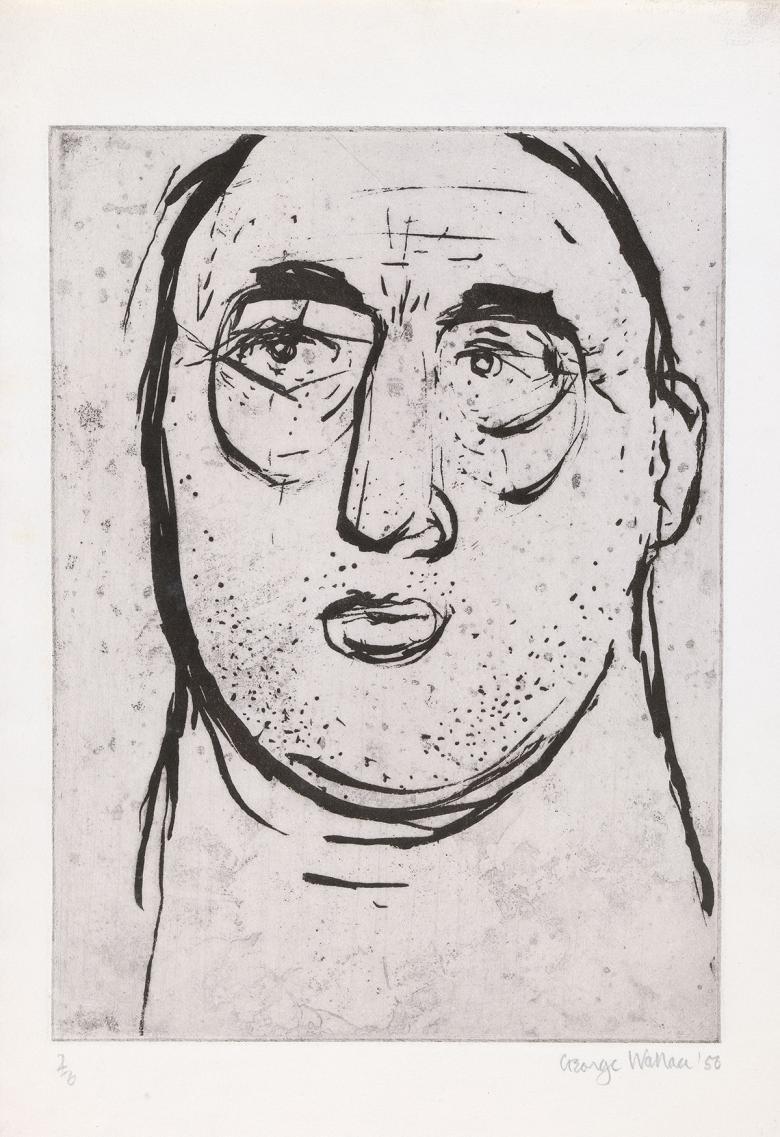 Pontius Pilate, Governor of the Roman province of Judea, who handed Christ over to be crucified, is captured in this print which has the qualities of a 'mugshot'. Wallace imagines what the Roman leader might have looked like, giving hima bull neck and over-fed, unshaven face. The cropping and use of rough, scraped lines draws our attention to the man behind the trappings of power. In such prints, Wallace imagines the expressions and emotions of the figures who play key roles in the stories central to the Christian faith.

What does this woman’s focused expression mean? Is she happy, sad or simply thoughtful? Is she trying to impress someone? 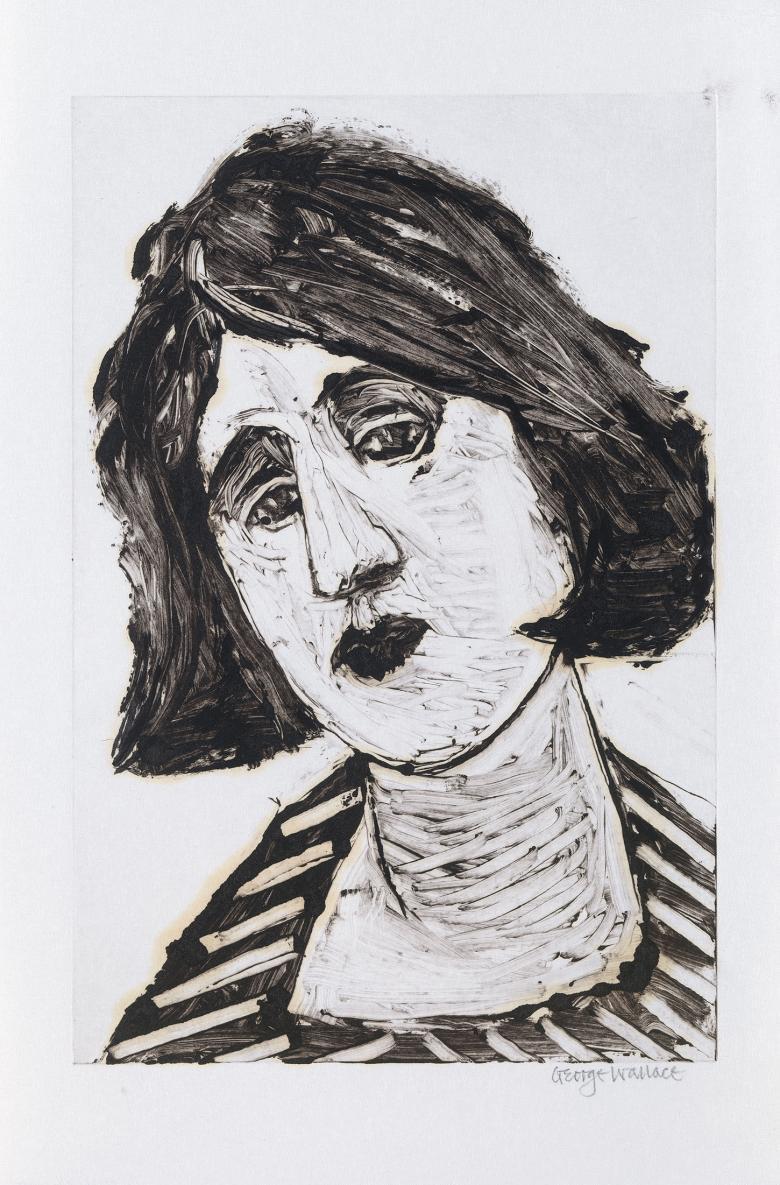 Wallace mused about the proliferation of mugshots, tiny photographic portraits used for identity badges, passports and in newspapers. He wrote: ‘The odd creatures that stare out … do not identify us, rather they are ourselves made into strangers. Flotsam in a floating world …’.

He took such images and blew them up into large scale faces which we as viewers can examine and scrutinise. These iconic large-scale monoprints were printed on galvanised steel plates. His method of working was the 'light field manner', where the image is painted on the plate in ink. Detail was worked in by scraping lines into the ink using cardboard scrapers. This allowed for dark lines to be sharpened and negative white spaces to be created, giving shape and volume to the figures. He made up his own printing inks using oil paint mixed with lamp oil (kerosene).

Why is this man behind bars? Does his expression show distress, hope or resignation? Does he spark a memory? 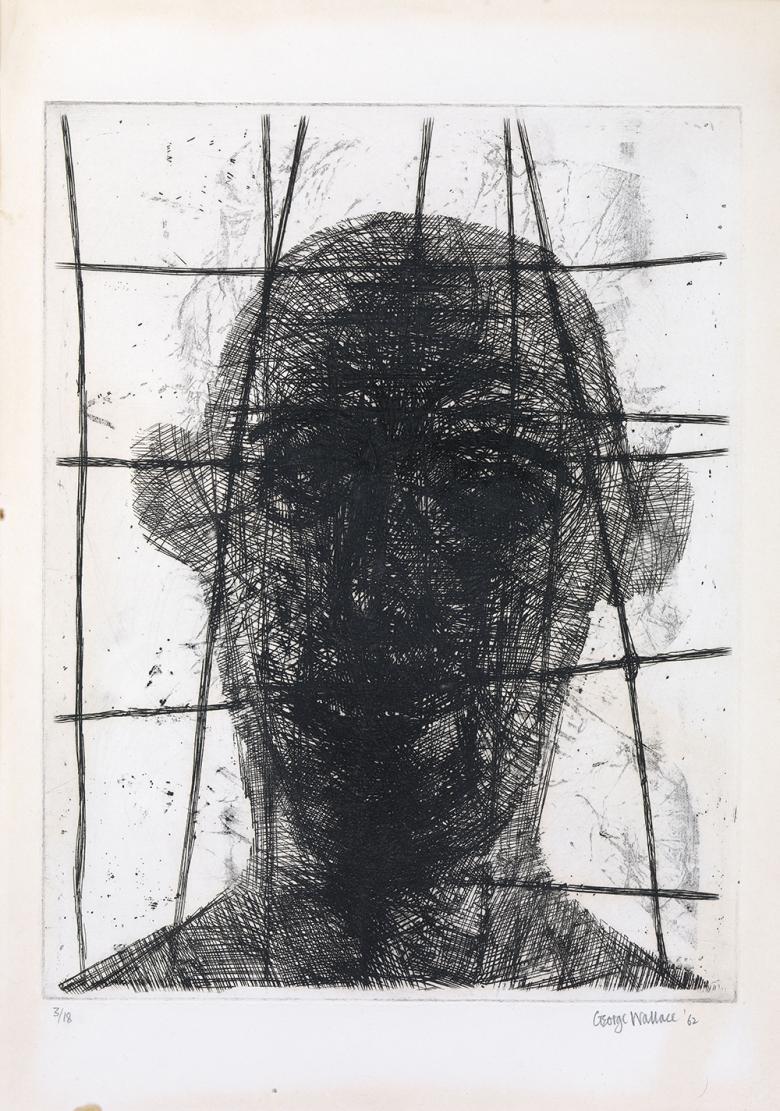 Head of a Caged Man, 1962
Etching and softground

This powerful image reminds us of the powerlessness of the incarcerated and their loss of identity. Resignation and sorrow are etched in the face of this unknown captive. Historically, prisoners have been used by artists to represent human suffering and oppression.

This is one of the few editioned prints in the Gallery's collection of George Wallace's work. Owned by a former student and close friend, who gifted it to the Gallery in 2018, it was a plate that Wallace reprinted many times. The donor remembers that Wallace was inspired to make a series of prints of prisoners after seeing the English sculptor Reg Butler’s award-winning maquette The Unknown Political Prisoner, 1955–6.

Is this soldier suspicious? Is he complicit in wrong-doing? Who or what does he serve? Is he just doing his job? 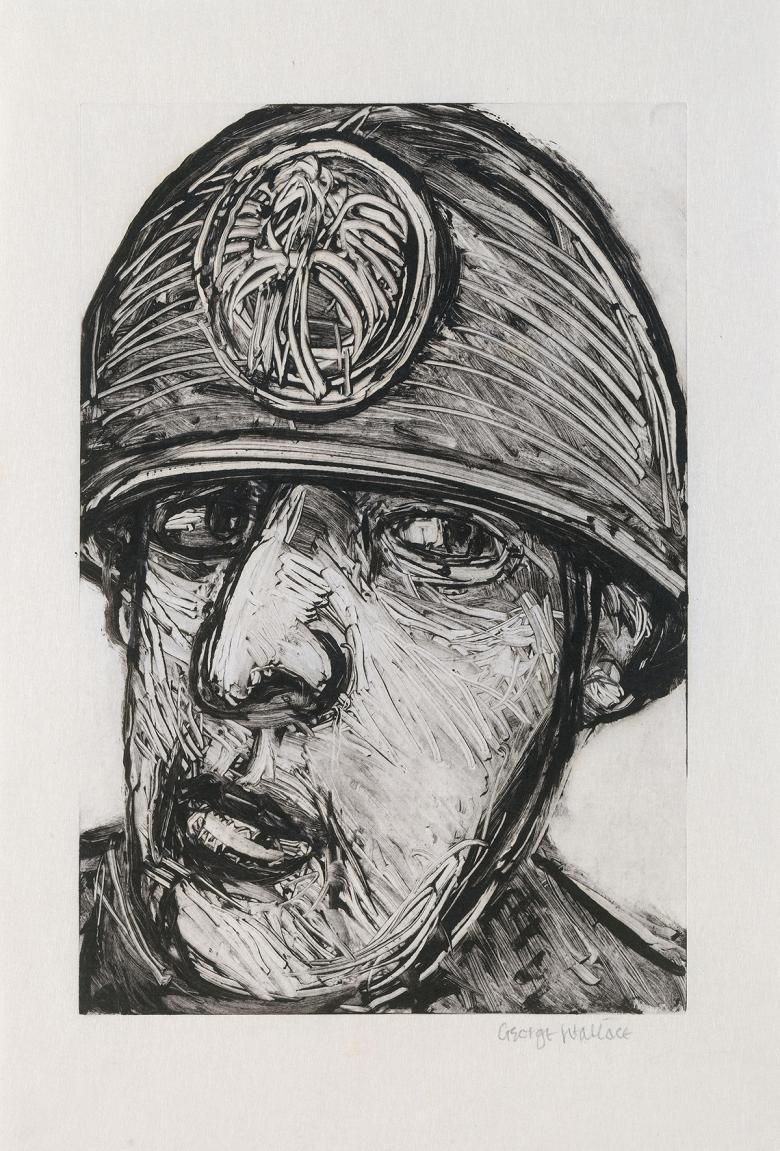 Man in a Helmet Looking to the Left, 1988
Monoprint

Wallace lived through the twentieth century and witnessed, albeit from a distance, many wars and conflicts. Soldiers are a common theme throughout his work, the first representation, an etching, dates to 1955.

As a young man, Wallace was inspired by Degas's monoprints, but did not create many himself. In retirement he returned to the technique with enthusiasm. Between June and August 1988 he produced over 100 monoprints, many of which relate to Christ's Passion and death. This head could represent a soldier who fought in the Korean or Vietnam wars or perhaps it is his imagined vision of one of the soldiers who stood guard at the Crucifixion.

The exhibition George Wallace: Reflections on Life is on view until 13 December 2020. Free entry.