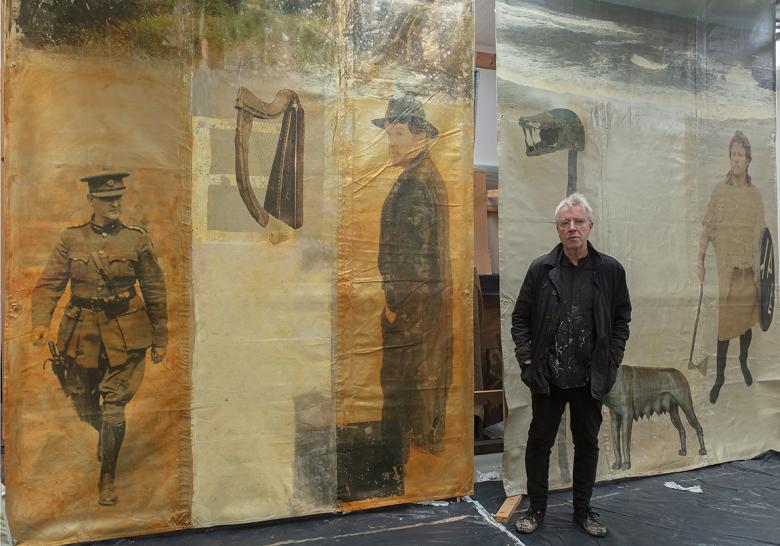 Addressing memory, history and questions of identity, an installation of works by one of the leading painters of a generation, Hughie O’Donoghue, opens at the National Gallery of Ireland on 12 March 2022. This exhibition is supported by the Department of Tourism, Culture, Arts, Gaeltacht, Sport and Media under the Decade of Centenaries Programme 2012-2023.

A series of six large paintings depicting six historical figures, Hughie O’Donoghue: Original Sins will be on view in the Gallery’s iconic Shaw Room. Drawn from three distinct periods – ancient history, modern history, and the contemporary world – the figures are paired together:

A dynamic programme of events and activities will run alongside the installation including an introductory lecture by curator Dr Brendan Rooney, tours, and a day of events created by young people for young people (as part of the Gallery’s Apollo Project).

Dr Brendan Rooney, Head Curator at the National Gallery of Ireland, commented: “The Gallery is delighted to be collaborating with Hughie as part of its contribution to the Decade of Centenaries. It is very exciting to see Daniel Maclise’s monumental The Marriage of Strongbow and Aoife subjected to the scrutiny of an artist for whom history and memory are so important. The installation of Hughie’s six new paintings in the Shaw Room represents an unprecedented repurposing of the Gallery’s most famous display space, and casts Maclise’s picture, which inspired them, in a new light.”

Hughie O’Donoghue was born in Manchester, England, but much of his work is influenced by time spent in his mother’s place of origin, the remote Barony of Erris in Co. Mayo, Ireland. His paintings explore themes of universal human experience, often on an epic scale, they meditate on ideas of truth and the relationship between memory and identity, drawing on history and personal records to create works which resonate with emotional intensity.

The Gallery marks the conclusion of the Decade of Centenaries with three special displays in 2022. As well as Hughie O’Donoghue: Original Sins, two new free exhibitions will open later in the year. Keating’s Allegories of Change (from 20 August 2022) centres around Seán Keating’s 1924 painting An Allegory, which addresses the divisive nature of the conflict of the Irish Civil War. Estella Solomons: Still Moments (from 3 September 2022) features a number of portraits by Solomons of leading revolutionary and cultural figures of the time.

Hughie O’Donoghue: Original Sins runs in the Shaw Room of the National Gallery of Ireland from 12 March to 19 June 2022. Admission is free.

This exhibition is supported by the Department of Tourism, Culture, Arts, Gaeltacht, Sport and Media under the Decade of Centenaries Programme 2012-2023.

The National Gallery of Ireland is one of the country’s most popular visitor attractions housing the nation’s collection of European and Irish art from about 1300 to the present day, and an extensive library and archive. Entry to the collection is free for all to enjoy, learn and be inspired.