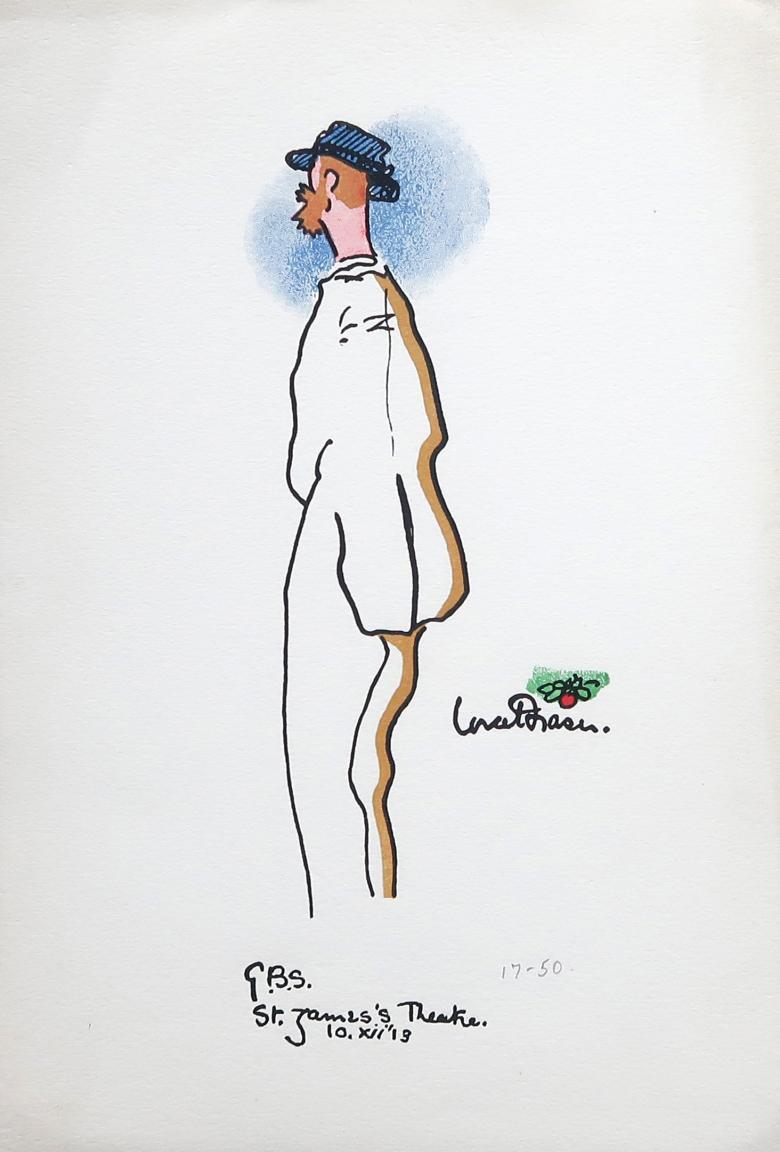 Shaw and the Gallery: A Priceless Education

Shaw, celebrated playwright and winner in 1925 of the Nobel Prize in Literature, spent many hours as a child wandering the rooms of the Gallery, calling it a place to which he owed “much of the only real education I ever got as a boy in Eire.”

Marking 70 years since Shaw’s death, the display of selected works from the Gallery’s archives - from original postcards and letters to photos and sculpture - invites visitors to discover the story of one of the country’s most influential writers and the place he called the “cherished asylum of my boyhood”.

Just before Shaw’s 94th birthday, he completed his last will, leaving one third of his posthumous royalties to the Gallery. These royalties increased substantially with the production of My Fair Lady, a musical based on Shaw's 1913 play Pygmalion, which was a success on Broadway in 1956 and became a popular film in 1964. The Gallery received its first Shaw bequest royalties in 1957 (£10,000) and by the end of 1959, over €240,000 had been received; the first purchases were made in 1959. The bequest ends in 2020.

Leah Benson, curator of the exhibition, commented: “At the time, nobody could have anticipated that this would amount to one of the largest ever financial gifts to the arts in Ireland. Shaw’s affection towards the National Gallery of Ireland began when he was just a boy in Dublin. In a letter, on display in the exhibition, he writes that the Gallery gave him ‘a priceless part’ of his education. It was a connection he sustained throughout his long life, and this bond is documented in the Gallery’s Library and Archive collections. The impact of his gift is evident when you walk through the rooms of the Gallery and see the influence it has had on the national art collection. Throughout its existence, the Shaw Fund has enhanced and enriched the collection, from the pictures on the walls to the fabric of the buildings in which they hang.”

The Shaw bequest has enabled the purchase of masterpieces such as The Terrace, Saint-Tropez by Paul Signac; Landscape with Flight of Stairs by Chaïm Soutine; Venice, Queen of the Adriatic by Domenico Tintoretto; Julie Bonaparte as Queen of Spain by Baron François Gérard; El Sueño by Francisco de Goya; and An Interior with Members of a Family, attributed to Strickland Lowry.

This exhibition is part of a series of annual exhibitions by the National Gallery of Ireland’s ESB Centre for the Study of Irish Art (ESB CSIA). The ESB CSIA is a research facility at the Gallery, housing one of the most important collections of library and archival material associated with the history of Irish art.

ESB chief executive, Pat O’Doherty, commented: “George Bernard Shaw believed in the power of education to create a brighter future, and in the power of art to educate.  His legacy has ensured many more generations have been able to enjoy the works of art within the National Gallery of Ireland. We are very proud to be supporting this exhibition through our long-standing partnership with the Centre for the Study of Irish Art.”

The exhibition coincides with Shaw’s birthday – 26 July – an anniversary that the writer himself purportedly refused to celebrate. According to a 1930 edition of the Evening Telegraph ‘On his 74th birthday, Shaw declared to a reporter: “The more my birthday is forgotten, the better I am pleased. By deed poll I have discarded my birthday forever”.’

For those who cannot attend in person, selected works acquired with the Shaw bequest are on view in virtual tours of iconic spaces such as the Shaw Room, the Grand Gallery, and the Irish collection in the Dargan Wing. See www.nationalgallery.ie

Supporting the National Gallery of Ireland

The Gallery is home to Ireland’s national collection of fine art, and seeks to share the wonders of that collection in a welcoming, inclusive and accessible way with visitors from both Ireland and overseas. There are many ways to support the work of the National Gallery of Ireland, as a Friend, a Patron, an Individual Donor or a Corporate Sponsor. Remembering the Gallery in your will is a wonderful way to make a lasting contribution for the benefit of future generations. You can help the Gallery to build on the achievements of over 150 years, to consolidate its position as a Gallery of international standing, and to reach out to as many people as possible to share the joys of Ireland’s national collection of fine art. Contact the Development Department for more details at [email protected] or by phoning +353 (0)1-6633500.