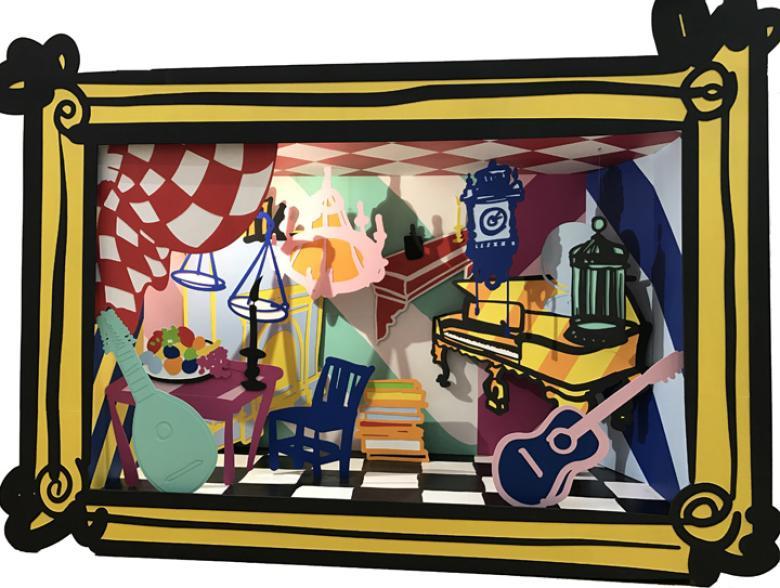 Maser, 'Magic of the Mundane', Theatrical Set, 2017. © the artistCredit

Maser: Magic of the Mundane

In response to Vermeer and the Masters of Genre Painting: Inspiration and Rivalry, Maser created a theatrical set entitled 'Magic of the Mundane' for the After Vermeer Project.

The muses in Vermeer’s work are always caught in the midst of a seemingly mundane moment.

I often wondered, if they had a say in what they were doing just as that now magical moment was measured, would they continue to choose to be captured this way? Would this continue to be their legacy? If the roles were reversed, and they were given the control, would they celebrate the joy of the everyday or would they want their moment to be more dramatic?

The different roles involved with a piece of art really interest me. The artist, the muse, and us: the viewer.

If the roles are altered and swapped, and muse becomes the artist, can we continue to celebrate the everyday or do we automatically try to project a better version of that moment. Of ourselves.

With the rise of the selfie, the muse also becomes the viewer… and the artist all at once. Will we ever be able to celebrate the magic of the mundane again?

I saw this as an opportunity to create a set, and to challenge the viewer to put themselves in the role of the muse and celebrate this 'magic of the mundane', allowing them to take ownership of the space and the narrative. I'm setting the scene for any muse to have the opportunity to decide how they want to be viewed, to tell their story and, if they’re able, to celebrate the here, the now, the nothing, the everything, as Vermeer so beautifully did.

Just like Vermeer, there are theatrics of the everyday in my work. I create curated theatrical spaces, similar to set design, and encourage people to incorporate it into their everyday life - their commute to work; their walk in the mountains.

In this instance I've created a stage for the muse to step into and celebrate the magic of a moment.

The set is constructed from wood and paint. I introduced the props that I've seen in Vermeer's paintings into this composition to give a sense of layering and depth and for the illusion of perspective.

I invite you in to use the space, a space to momentarily own, take your photo, to be a muse for a day. To be in the now.

Maser’s career began in 1995, painting graffiti on the streets of Dublin. After studying Visual Communication, he went on to establish himself as one of Ireland’s leading visual artists working in the urban environment, spending a two-year artist residency in the US, before settling in London. Most recently, Maser opened his solo show Foreign Language at Graphic Studio Gallery in Dublin, following Orbiting on the Periphery at Lazarides Gallery in London and an installation at the Palais de Tokyo Gallery in Paris. His large scale mural work and collaborations with artists such as musician Damien Dempsey, JR, Conor Harrington, and Fintan Magee have won him notoriety in the graffiti world while helping to establish him in the contemporary art scene.

More details are available at maserart.com.

The Gallery will reopen on Monday 10 May, and all visitors need to book a free general admission ticket in advance of visiting.

This will give you access to the permanent collection, free exhibitions and the Gallery Shop (reopening 17 May).