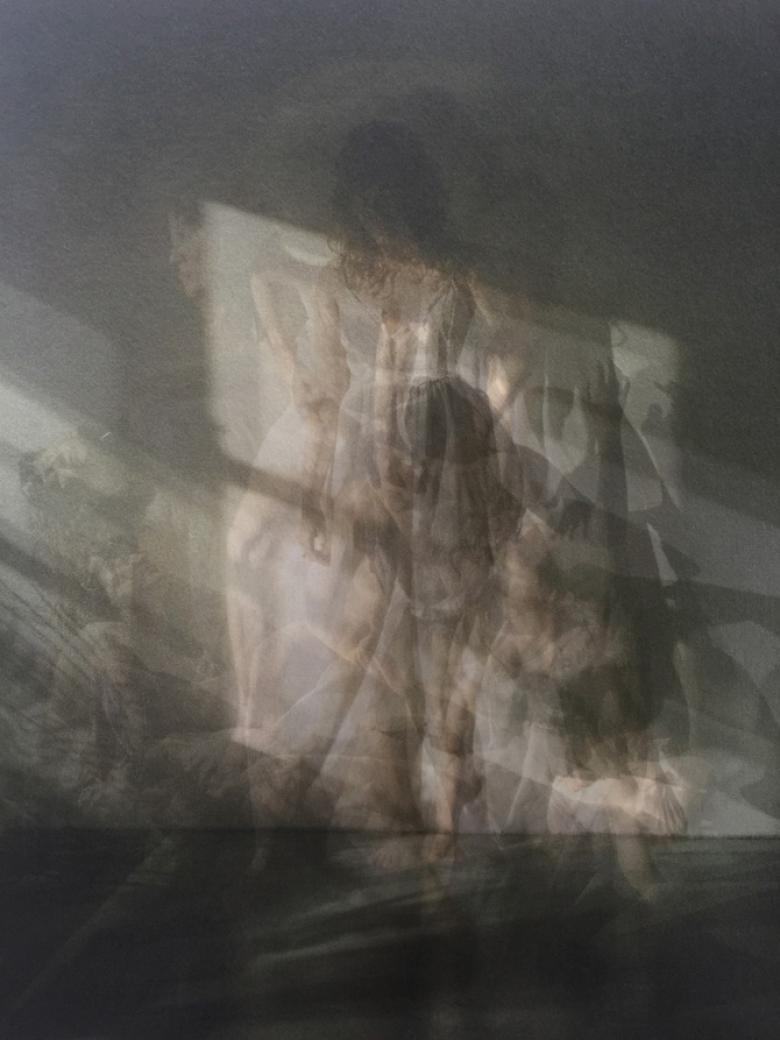 Dragana Jurisic's response to Vermeer and the Masters of Genre Painting: Inspiration and Rivalry for the After Vermeer Project is an archival pigment print called 'Tarantula'.

When first considering my response to Vermeer, I was immediately struck by the two main subjects of his paintings: women in domestic settings and the light. Photography literally means writing with light. The camera is a device capable of slicing time into a fraction of a second. Painting natural light, which is in a constant state of flux, requires great sensitivity and skill. This is where Vermeer's genius lies. Though he may have used Camera Obscura, which would have been helpful with perspectives and objects in his paintings, it does not capture the light as it changes over the course of a day. I tried to demonstrate this by tracking the natural light in my studio, creating a kind of moving image within a still image.

The pensive women in Vermeer portraits made me think about ‘A Doll’s House’ (1879) by Henrik Ibsen. In the play, Nora, the main character, leaves her husband to discover herself. The play caused a huge controversy at the time. Ibsen was inspired by the belief that “a woman cannot be herself in modern society.” He wrote the play while travelling in Italy where he became acquainted with Tarantism. Tarantati, female victims bitten by a mythical spider, suffered from a condition very similar to hysteria and melancholy, the symptoms Nora experiences in the play. These women were repressed by their society and the “bite” allowed them to be wild.

The only cure for Tarantism is the rite of the tarantula, which involves trance-like dancing, accompanied by live music, sometimes for days on end.

In ‘A Dolls House’ Nora performs a similar kind of a wild dance. The dance is a struggle for life, embodying anxiety and pleasure. In my piece Tarantula I sought to animate the pensiveness of Vermeer’s female figures through the Tarantella dance.

Dragana Jurisic was born in Slavonski Brod, Croatia (then Yugoslavia). Based in Dublin, Jurisic works in photography using “the act of photographing, of looking at the world through the camera lens, to help provide a semblance of control over an otherwise unpredictable world”. In 2009, she was selected as an Axis MAstar, “an annual selection of the most promising artists from the UK’s leading MA courses”. She obtained her PhD from the European Centre for Photographic Research, Wales in 2013 and has since received, among other accolades, Special Recognition by Dorothea Lange and Paul Taylor Prize, the Emerging Visual Artist Award, residencies in Dublin and Paris and, most recently, a bursary from the Arts Council of Ireland.

More details are available at draganajurisic.com

The Gallery will reopen on Monday 10 May, and all visitors need to book a free general admission ticket in advance of visiting.

This will give you access to the permanent collection, free exhibitions and the Gallery Shop (reopening 17 May).