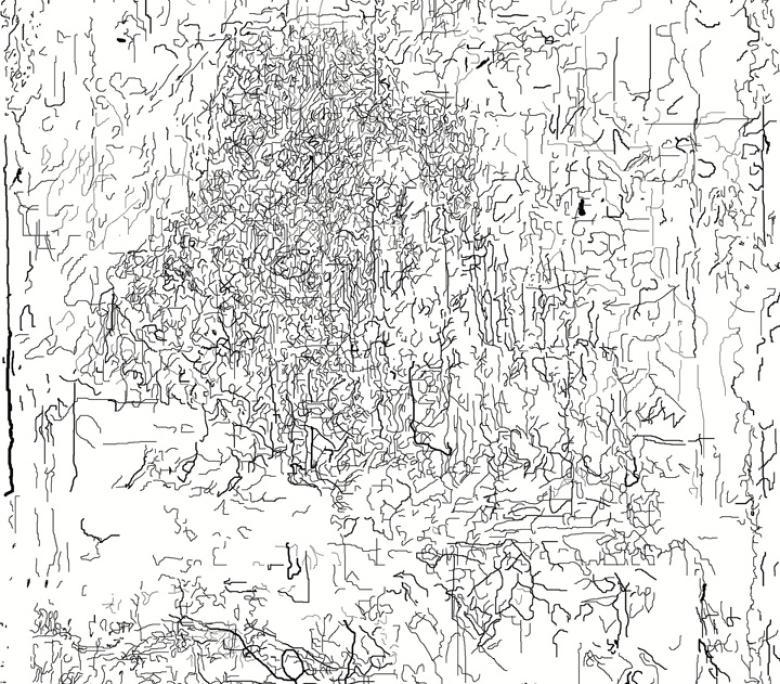 For the After Vermeer Project, Brian Fay created a series of works in response to Vermeer and the Masters of Genre Painting: Inspiration and Rivalry.

My work here reflects on time through the movement and history of three of Vermeer’s paintings: Woman with a Lute, The Lacemaker and The Love Letter.

I have been thinking about some of the characteristics frequently attributed to Vermeer: timelessness and stillness. While these qualities represent constancy, the actual physical properties of these paintings – oil paint, gesso, canvas, stretcher and so on - are by contrast in constant change over time.

I am drawn to two distinct types of movements in time suggested by the paintings of Vermeer.

Firstly, there is the slow physical cracking-like movement of the painted surfaces of his canvases which have emerged across centuries. Secondly, there is the chronology of their literal movement and travels as physical objects across the globe. They both mark the complexity of time and movement that exists in a painting and which can sometimes be obscured from us when we encounter a work of art.

With these hidden histories in mind, I began to develop three different series of drawings.  I mapped the now intricately cracked surfaces of Vermeer’s Woman with a Lute and The Lacemaker. Other drawings I made drew on the concealed but sometimes visible work conservators carried out on The Love Letter.  While a further series charting the geographical movement of each of these three paintings uses the contemporaneous map of Europe Vermeer included in his Woman with a Lute.

Brian Fay’s practice is rooted in drawing and he uses the materiality of pre-existing artworks and objects to examine their complex relationship to time. His work is in the National Drawing Collection Ireland, and the collections of The Crawford Art Gallery, Cork, the Dublin Institute of Technology, Office of Public Works Irish State Collection and private collections. Fay holds a PhD from Northumbria University, England, and lectures in Fine Art at the Dublin Institute of Technology. He is the winner of the 2014 Derwent International Drawing Prize and the AXA Drawing Prize 2016.

More details are available at brianfayartist.com