Before Lucia’s restoration work could begin, the painting underwent a full-scale photographic examination of the ground layer and underdrawings.

Infrared photos revealed the underdrawings and the artist’s fine brushwork. They also showed some old in-paintings in several areas, old repairs and fill in cracks of the original paint layer. These images, in tandem with microscopic examination, clearly showed the extent to which the painting had been damaged in the past, possibly by excessive cleaning. The underdrawings which were visible using the infrared photography were also visible to the naked eye, due to a very thin paint layer and transparent, aged pigments. The visible underdrawings demonstrate extensive use of free-hand brush drawing – some of the garments in the work are constructed from drawings with careful, freely executed graphic work: cross-hatching is used to give volume to the fabric, as seen in Nicodemus’ mantle (below). 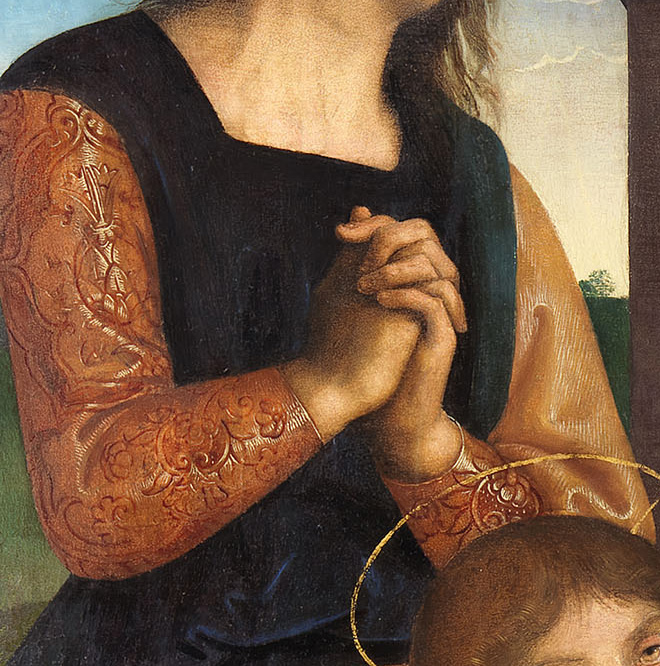 Cross-hatching visible in mantle of Nicodemus. © National Gallery of IrelandCredit

The possibility that tracing paper was used should be considered, given the similar style of composition in another version of this work that is now part of the Uffizi collection. In both cases, the similarities in the figures and dimensions suggest the use of a transfer cartoon, which has since been lost 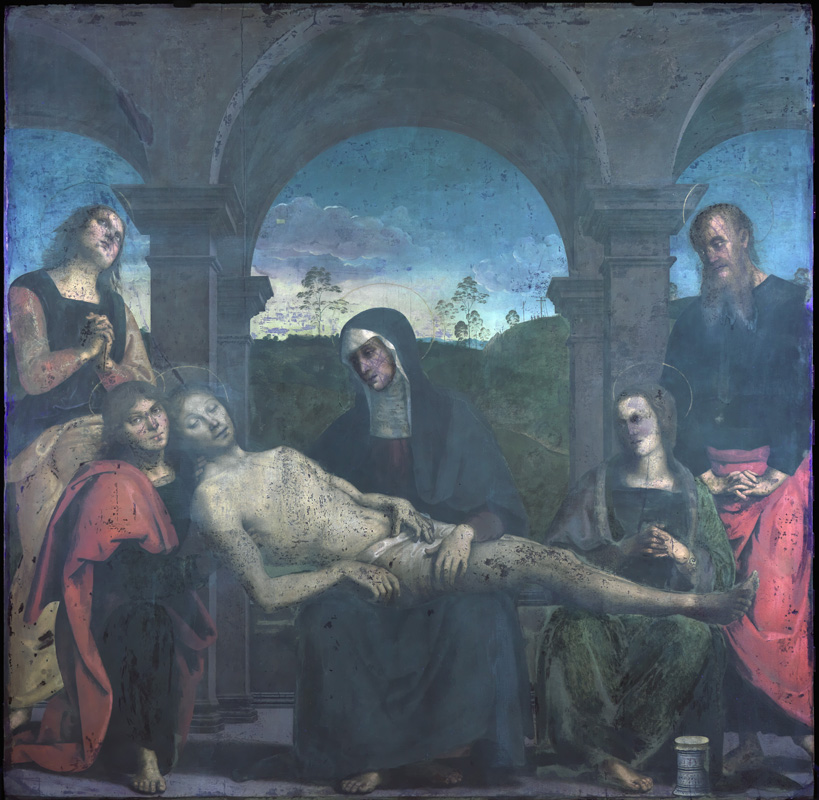 Ultraviolet photos (above) revealing old in-painting and filling and the uneven brownish yellow layer of discoloured varnish. The coat of varnish is dense, applied for purpose of hiding old abrasions.

Restoration Treatment
The original appearance of the work has been drastically altered by the conservation treatments carried out before it entered the Gallery’s collection. There are several superimposed layers of historic reconstructions over the original painting; at least three different restoration campaigns are clearly discernible. During the most recent conservation process the painting was divided into several sections, and the treatments carried out sequentially so as to retain control of the process and not lose the overall view of the composition. The aim of the cleaning was to remove the discoloured varnish and the overpaint. A system of dry cleaning by scalpel, without the use of solvents, was tested and selected. This type of mechanical cleaning enabled total control over the cleaning process. The general effect of removing the yellowed layer was to enhance the cooler tones of the colour spectrum, giving a more correct impression of the intended interplay between the various colours, even with the loss of intensity of same of the red lakes through fading.

Photographic documentation undertaken during earlier restoration work provided a clear and unambiguous record of the extent of loss and damage to the original work as cleaning progressed. After cleaning, the picture presented a variety of retouching problems: abrasion and small losses, larger areas of total loss, and entire missing sections of details. The priming is visible through the abrasions in the paint layers and over the gesso ground layer. The paint layer is weak in construction and of a very thin and fragile nature - the painting had probably been abraded to the priming layer during the previous cleaning process. This was especially clear in the sky (pictured below), flesh tones, shadows, and in the brown colours of the architectural components where the crests had been removed. 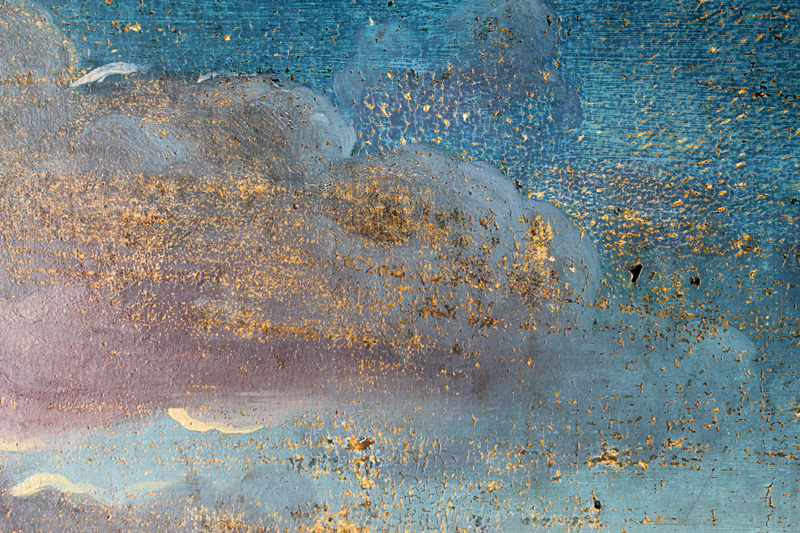 Paint losses in the sky before conservation work. © National Gallery of Ireland Credit

The need to compensate for losses in the painting raised a number of ethical issues that are central to the debate over modern attitudes to restoration.  In general a policy of deceptive or invisible retouching has been adopted since the nineteenth century. By today’s standards, imitative restoration from previous centuries would be considered excessive, and in the case of this painting, this level of crude over paint was clearly visible throughout the faces of the figures, which greatly concealed Perugino’s delicate brush work and palette. In the past fifty years a more historically informed approach to restoration has evolved, giving greater consideration to paintings as aged objects as well as aesthetic images. The current aims of restoration are to preserve many of the naturally occurring traces of time that a painting displays. This is achieved by retaining the visible presence of craquelure and the inevitable fading and discoloration of certain colours, while at the same time re-establishing the legibility of the image. Different retouching techniques are accepted, provided that their results are distinguishable at a close range from the original pattern. The retouching method of ‘chromatic selection’, which was used in this case, consists of filling the lost area of original paint-layer with several pure colours in brush strokes, which at a distance blend with the painting. This method of retouching rendered the integration in less saturated colours than the original, creating a subtle difference between Perugino’s technique and the work of the conservator.

Detail showing the figure of the Virigin (from l-r) before, during, and after conservation treatment. © National Gallery of Ireland.Credit

The restoration of this panel involved a holistic treatment approach that took into account the complex nature of Perugino’s materials and techniques, the resulting ageing processes, and the hands of the various restorers that have worked on this panel over the centuries. The results of this extensive project, which spanned two years of work, have revealed the true genius of Perugino’s delicate palette and vibrant brush strokes.