Perugino Project | the history of the painting

According to Vasari’s Lives of the Artists Perugino’s The lamentation over the dead Christ’was commissioned by the Gouffier family, a noble French family, and it hung in the church of Saint Maurice, on the grounds of their chateau in Orion. A drawing by Perugino of a similar subject matter which is now part of the Louvre collection further confirms that the panel was commissioned by a French family.

During the 16th century the Huguenots twice laid siege to the castle, in 1568 and again in 1569, and several paintings and sculptures were damaged. It seems likely that the figures in Perugino's painting were damaged during this time - the heads of Nicodemus, Joseph of Arimathea, Mary Magdalene and the Virgin Mary were badly vandalized (below), although the face of Christ and John the Evangelist remained untouched. The Perugino panel remained in the Gouffier family until the end of the 17th century, before entering the collection of Philippe II Duc D’Orleans, regent of France. 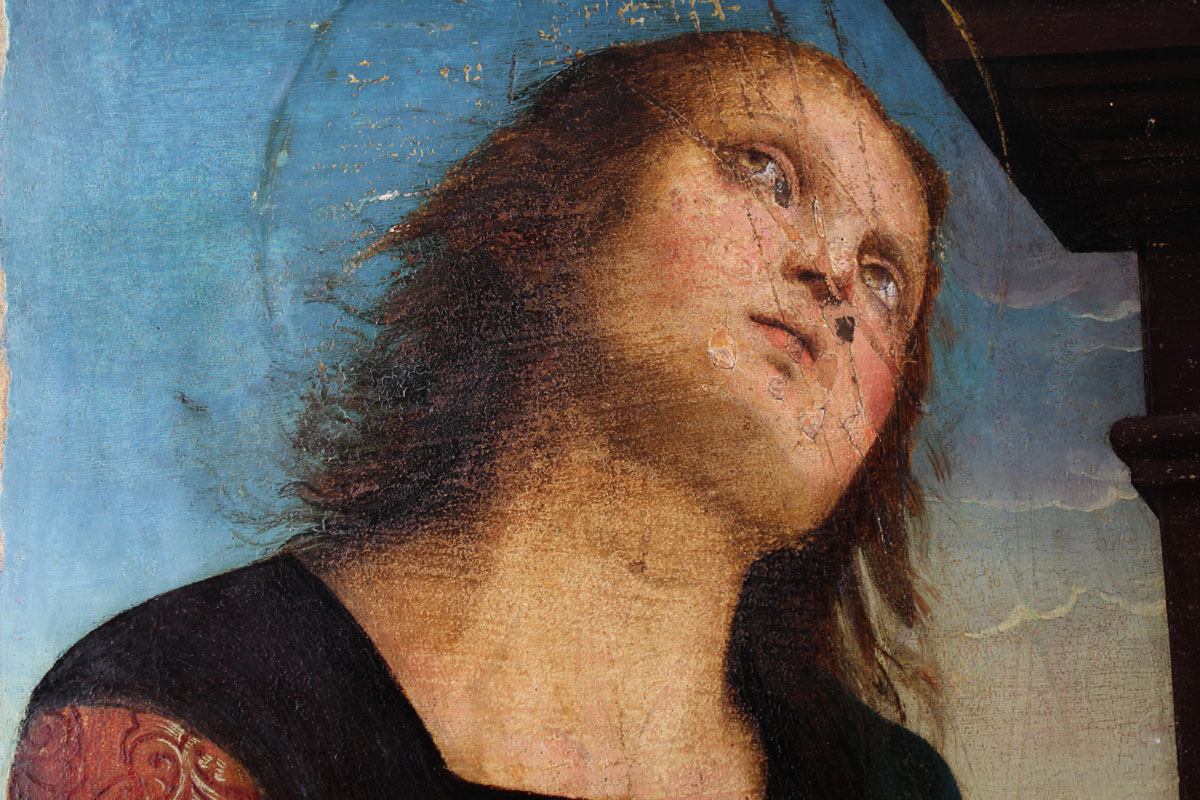 Cleaning revealed damage to the head of some of Nicodemus. © National Gallery of Ireland.Credit

After the French revolution, the Orleans Collection was brought to England and, at the famous Orelans Sale of 1798 in The Lyceum in the Strand, the Lamentation was acquired by Sir Christopher Sykes. It stayed in the Sykes Collection until June of 1931, when it was bought at auction at Christie’s by the National Gallery of Ireland. Then Director Thomas Bodkin considered it his greatest bargain and most precious discovery.

Previous restorations of the painting

Notes on the condition and conservation treatments on the painting before it entered our collection in 1931 are limited. Following its acquisition, Sir Augustus Daniel, the Director of the National Gallery, London wrote to the Thomas Bodkin to say “I am extremely glad that you have had the courage and gained the success of acquiring the Perugino….It has been quite a first-class work. I must say that it was the condition that frightened me…”.

Bodkin, considering no-one in Dublin to be sufficiently qualified for the task restoring his recently acquired works, arranged for Sebastian Isepp, chief restorer at the Kunsthistorisches Museum in Vienna to come to Dublin to examine a number of paintings, including the Perugino. In July 1936 the panting was sent to the National Gallery in London for X-ray examination, which identified the extent of the damage to the panel, and then went on to Vienna where Isepp carried out the restoration work. Numerous letters between Isepp and the Board of Government and Guardians of the Gallery were sent throughout the year long restoration of this panel, documenting the work that was done, including the removal of two heraldic crests – the coats of arms were those of Claude Gouffier and of his wife Jaqueline de La Tremoille, and are now thought to have been executed between 1533 and 1548, and are an important part the history of the painting. Isepp reported on their removal in a letter to the Gallery, saying “I removed the coat of arms, which are very disturbing, and from the 18th century?”. It is likely that Isepp came to this conclusion because they were gilded, and, unlike the rest of the painting, had not deteriorated, leading him to believe that they were a more recent addition. In the images below, the crests can be seen in the a photograph dating from 1931, before any restoration work was carried out. In the second photography, showing the work after the second conservation treatment in 1969-70, we can see that they have been removed. 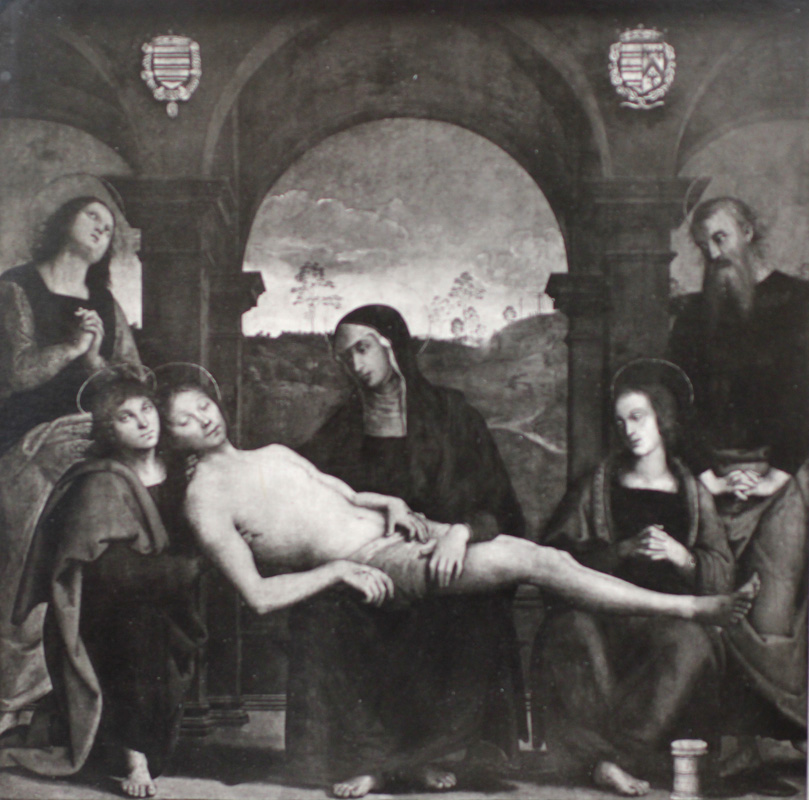 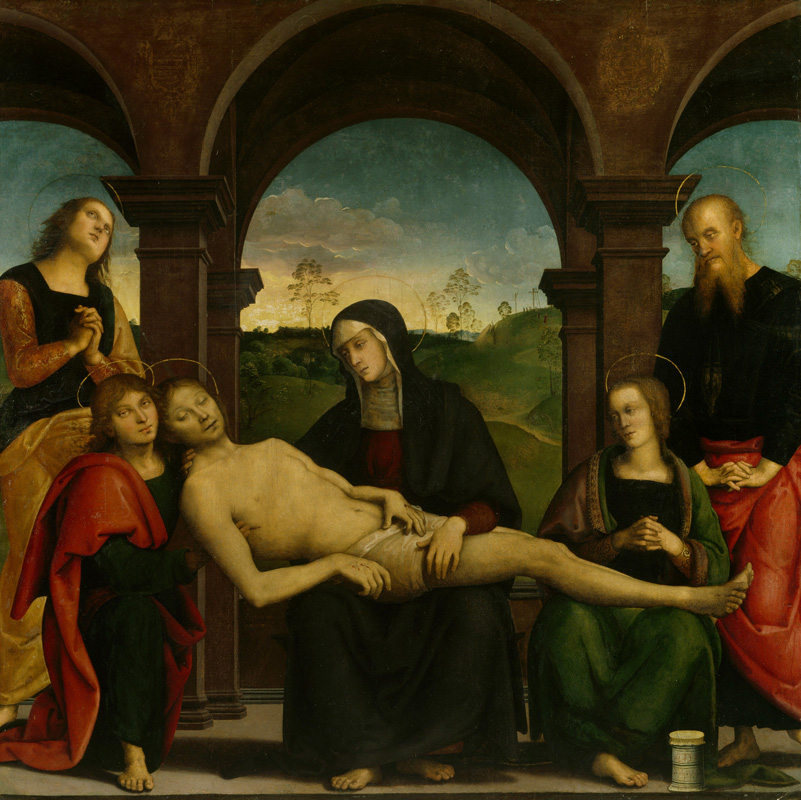 Photographed in 1970, following restoration. The crests in the background are no longer clearly visible. © National Gallery of Ireland.Credit

This further restoration of the panel was carried out between 1969-70 by the first conservator of the National Gallery of Ireland, Matthew Moss, and the treatment report for this work is also in the Gallery’s archives. The documentation from both these conservation projects were invaluable in carrying out the latest conservation work in 2014/15.