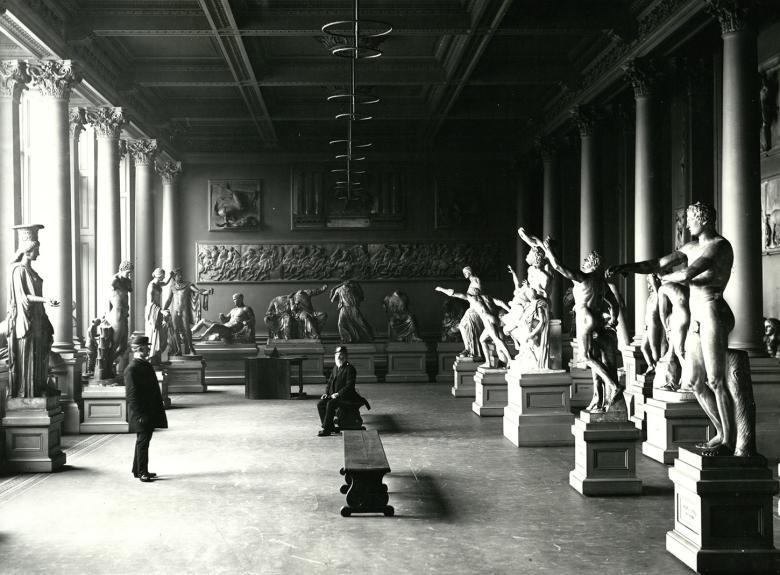 To mark International Sculpture Day, we're taking a look at the Gallery's collection of plaster casts. Although they're no longer on display, they were a very important feature of the Gallery when it first opened in 1864, as you'll find out.

What is a plaster cast?

What were plaster casts used for?

During the Renaissance period, there was a resurgence of interest in antiquities. Art academies made use of plaster casts of the ancient statues of Greece and Rome to teach their students.

Plaster casts at the National Gallery of Ireland

When the Gallery first opened in 1864, plaster casts were exhibited in a Sculpture Room just inside the entrance (now the Shaw Room). Plaster casts were commonplace in museums of the 19th century as educational tools. The Gallery’s first director George Mulvany believed that they represented some of the greatest achievements of Western Civilisation and that the Irish public should be shown the glories of the ancients from which they could learn and to which they could aspire. In 1875, our second director Henry Doyle had some concerns about the immodesty of the statues, so the cast caretaker was paid an extra twelve shillings to rectify the situation – in the Gallery’s records from the time, the payment is noted as being for ‘making leaves for statues’!

Identifying some of the plaster casts in the Gallery

If we look at photographs of the sculpture hall from the 1890s below, both from the Lawrence Collection, National Photographic Archive, we can identify some key works. Use the swipe-over tool on the photographs to reveal the following plaster casts: 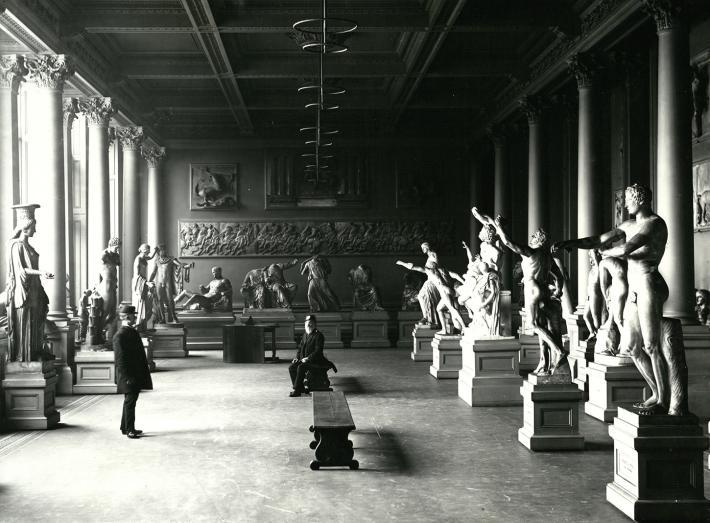 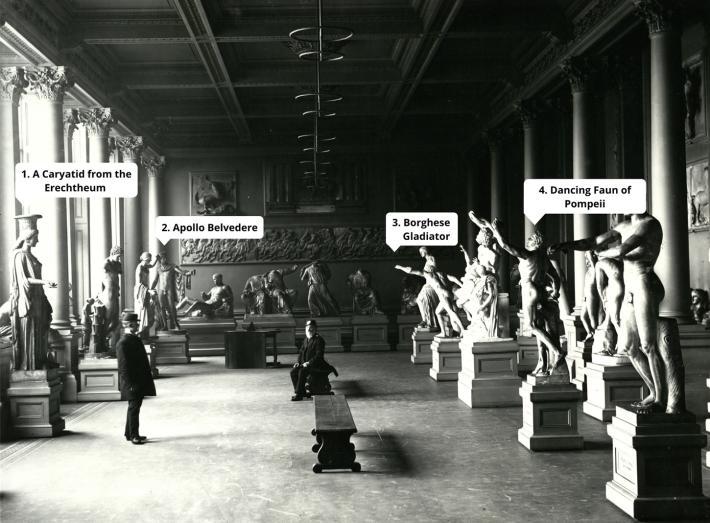 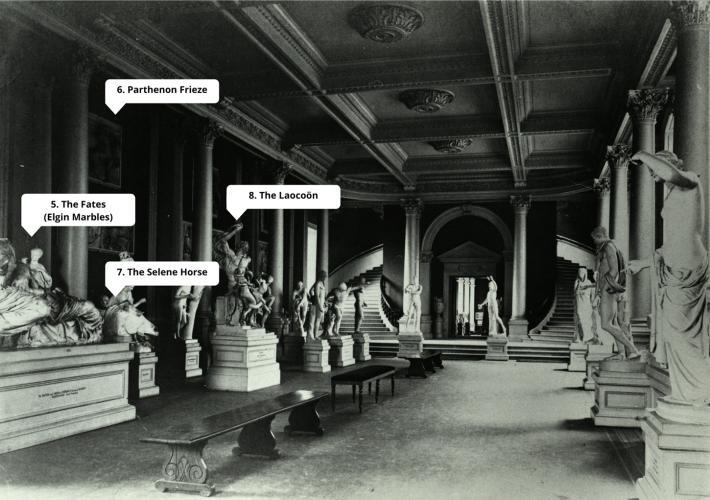 Who made the Gallery’s plaster casts?

Many museums and galleries had in-house cast workshops, including the Louvre, the National Museum of Naples and the Gipsformerei, Berlin, the oldest existing cast museum in the world. There were also many commercial establishments who produced them, like Martinelli of Athens and Malpieri of Rome. The National Gallery of Ireland’s casts came mostly from the British Museum, which was itself supplied by an Italian entrepreneur called Domenico Brucciani who had set up a cast showroom in Covent Garden in 1837. Brucciani was the main provider of casts to museums in the UK and Ireland from the 1840s onwards and made his name when his cast of the Apollo Belvedere was displayed at the Great Exhibition, London in 1851. In 1853 studying casts became part of a standardised art curriculum, known as the Kensington system, and until the 1890s Irish artists had to send their drawings of the same casts for marking in London.

Where are the Gallery's casts now?

In 1937, a comprehensive rehang of the Gallery banished the casts to the stores, where a very small number still remain today, including the lion of Halicarnassus, featured in Richard Moynan’s painting Taking Measurements - The Artist Copying a Cast (below). Many of the others deteriorated over time, and were destroyed. As time moved on, casts came to be seen as part of an outdated curriculum which no longer had a place in the 20th century. On 7 June 1969 casts of antique were broken up at the Metropolitan School of Art on Kildare Street, now the National College of Art and Design (NCAD), during the student occupation of the college. Elsewhere in Ireland casts do survive, as can be seen by the care and attention given to the Apollo Belvedere and the Laocoön in the Crawford Gallery. 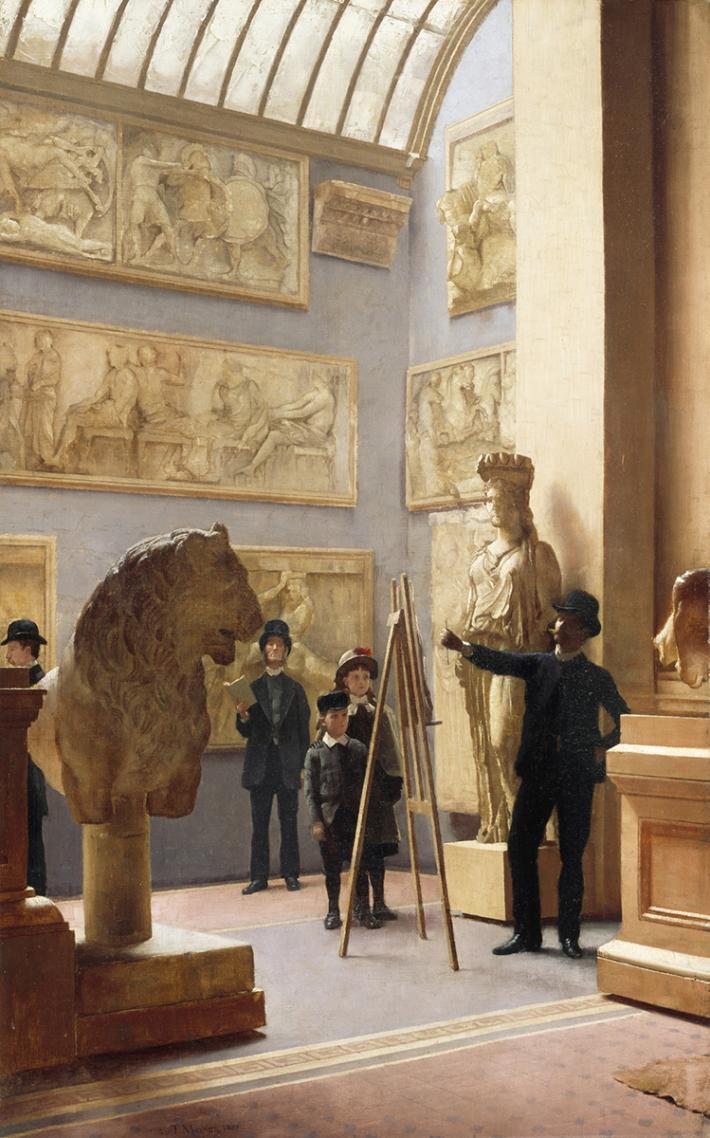 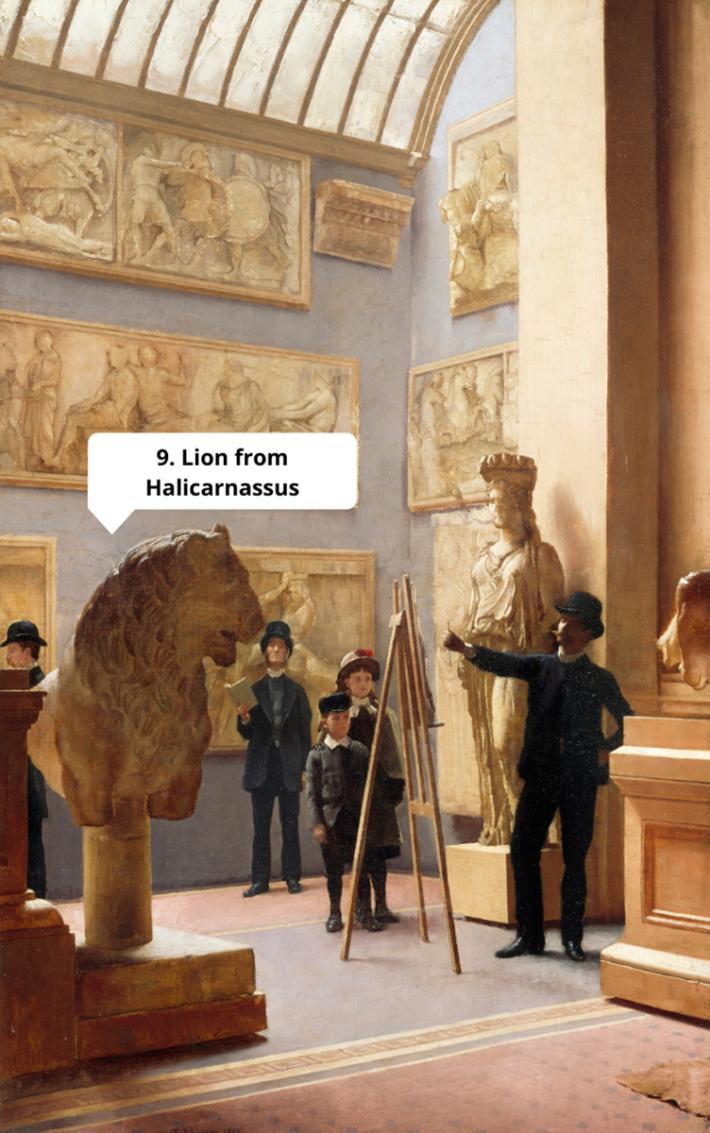