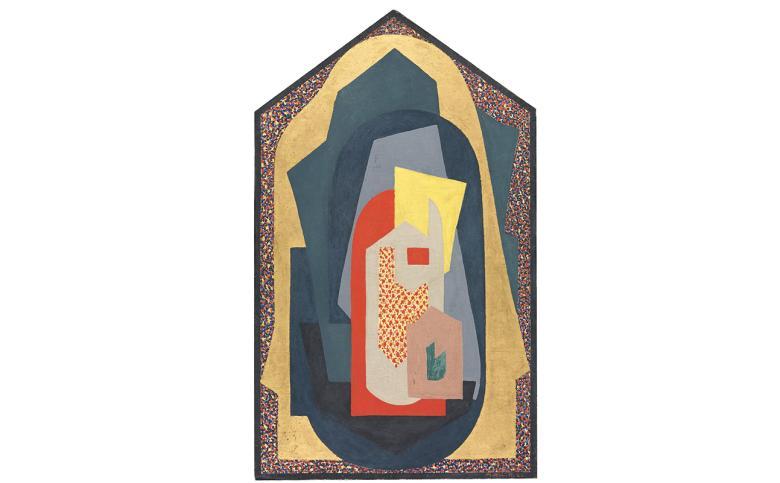 In this post, we consider the art movement Cubism through excerpts from Cubism, by Albert Gleizes and Jean Metzinger.  This text will provide insights and ways of looking at Mainie Jellett’s Decoration and, as a contextual work, Juan Gris’ Pierrot.

This text offers insights and explanations on aspects and properties of the art movement Cubism. Written by French artists and theorists Albert Gleizes and Jean Metzinger, the text provides an appropriately multi-faceted take on the movement as it was evolving in 1912. Gleizes himself claimed to be the founder of Cubism, and in this text, his and Metzinger’s kinship with artists is palpable. They root their discussion in the work of Gustave Courbet and Edward Manet, and they pay homage to Paul Cézanne, who, they say, primed the style and thinking of Cubist artists: “…he plumbed reality with a stubborn eye…”.

In this text, Gleizes and Metzinger establish their view on the differences between what they call ‘decorative’ art and painting. They align the properties of decorative art with that of an organ, and align the properties of painting with that of an organism. This gives us a sense of the richness and possibility of painting, especially in tandem with the newness of modernism. As Gleizes and Metzinger put it in this text, “It does not harmonise with this or that ensemble, it harmonises with the totality of things, with the universe; it is an organism.”.

In Cubism, there was an effort to make solid forms on the picture plane, a response to the formlessness of Impressionism. Gleizes did not fetishise abstraction: for him it was a means to an end. In his teaching and writing, Gleizes outlined three stages in Cubism. Firstly he defined Cubism as an assertion to volume, perspective unity and three dimensions in an immobile object for an immobile spectator. Secondly, Cubism began to imitate the mobility of the camera by articulating multiple angles. Lastly, Cubism accepted and celebrated the static nature of the surface, its limits and its inability to be anything other than its own two-dimensionality. Through embracing the flatness of painting, another form of movement was created - the movement of the eye established by what was available to the painter, the interaction of plane surfaces, line and colour.

Mainie Jellett mapped out three revelations in her life’s work, and the third and potentially the most significant of these revelations came about through the teaching of Gleizes, under whom she studied while in Paris. He taught Jellett methods of translation of forms, rotation of forms, and how to combine both methods on the same surface. Decoration was one of the first abstract paintings shown in Ireland. It was exhibited at an exhibition titled The Society of Dublin Painters Group Show, in 1923. If we can time travel in our minds, and imagine what it was like to witness this work in 1923 when we had not seen a painting like this before, we can experience the impact and impression this painting had on its viewers. Its monumental status in Irish art history identifies this work as a pioneer. Jellett understood a Cubist sensitivity to colour and form, working with colour as pigment rather than depicting colour as light, Jellett asserts colour within form, allowing the properties of painting to interchange the two elements. In observing Jellett’s decision-making process for the composition of Decoration, we can connect it to Gleizes' and Metzinger’s assertion of a rule within Cubism: “Every inflection of form is accompanied by a modification of colour, and every modification of colour gives birth to a form.”.

Jellett had a relentless commitment to the principles of Cubism, but at the same time, in Decoration, she does not completely reject elements of representation. Her commitment to Cubism took perseverance, as abstraction was met with indifference by many; it was seen as interference more than a progression. Jellett’s independent thinking and persistence echoes what Gleizes and Metzinger describe as “the artist who abstains from any concessions, who does not explain himself and who tells nothing, builds up an internal strength whose radiance shines all around.”.

Decoration has been interpreted as a depiction of the Madonna and Child. It suggests an embrace, with forms hugging one another, and small shapes embedded into larger ones.The peak in the shape of the actual surface is often seen in painted depictions of the Madonna and Child. The palette, particularly the gold outline, echoes the Madonna’s halo, although in this case, it stretches downwards and continues to the bottom of the surface. The peaked shape could bring to mind, too, the architecture of a chapel, or the basic design of a home. Decoration can also be seen as a ground view of aligned buildings or an aerial view of flattened buildings. We can abstract it again as a cluster of shapes, simply evolving from small to large. All of its forms allude to a central point, though this is not necessarily a key principle of Cubism. Its multiple planes create an active and unsettled ground that can be a signifier of progression, consistently moving and pushing its own limits. Through the inclusion of its compositional frame, the work offers content that is edgeless. The shape of the frame is repeated within the painted area, a further dismantling of traditional signifiers in a painting, and entering a space Gleizes and Metzinger discuss as plastic consciousness. 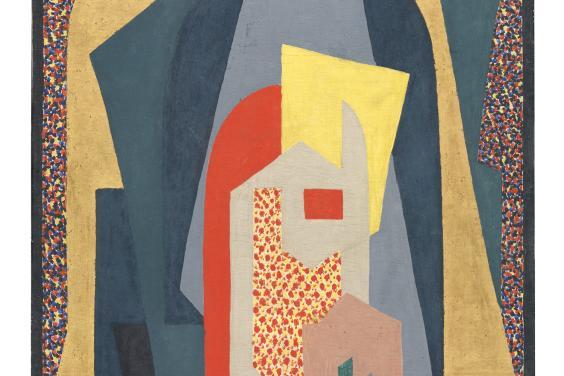 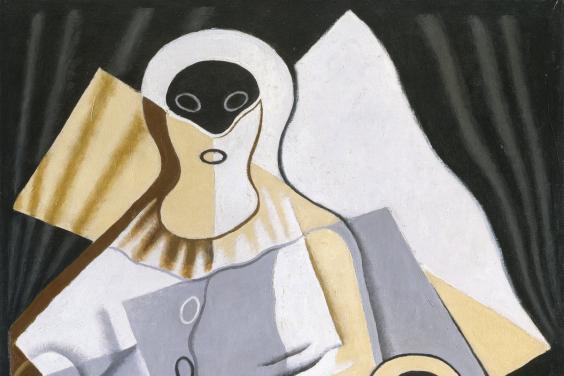 Despite the draw France had on influential artists, French art consistently took time to reach Ireland and even longer to achieve any real approval in Ireland, perhaps because they often seemed at odds with the character of the Gaelic Revival movement. On the other hand, advocates of Modernism advanced the argument that exposure to international contemporary art was a way to develop a new school of painting specific to Ireland.

Art critics wrote in response to Decoration in 1923, “they are all squares, cubes, odd shapes and clashing colours. They may, to the man who understands the most up-to-date modern art, mean something; but to me they presented an insoluble puzzle.”. Unpacking this statement can be quite useful for how we think about this painting today. We can actually identify this writer’s response as one of the pursuits of abstraction, to be “an insoluble puzzle”, which brings us back to Cézanne. In his work, painting was not going to talk about the world, it was going to be of the world. At the turn of the 20th century, painting was happening at a time that demanded it to find a new language. One way of doing that was to deal with the surface of the canvas and nothing outside of that. Painting was moving away from depicting the world, it was now of the world; an object in and of itself, making them nuanced and complex. Works like Decoration are in company with us more so than describing the world to us. This introduces possibilities in modernist paintings; they are available to their own evolution as they remain still on museum walls, holding silent knowledge for us to unlock. Jellett’s friend and peer, Evie Hone, describes Jellett’s ability to create such works: “She created works which were living organisms with a form and life of their own, independent of space and time.”

A comparative work to Decoration is Juan Gris’ Pierrot (1921). In Pierrot, we can sense some differences to the ideas presented by Gleizes and Metzinger. Gris sustained conventions of painting. In comparison to some of Jellett’s oeuvre, he had no interest in painting pure abstraction, but was instead more interested in reconciling modernist and historical painting. In Pierrot, the figure is more intact than distorted. A relationship between the figure and objects depicted is a harmonious one: both the objects and the figure are directed at us, the viewers, citing a Spanish still-life legacy, and giving privilege to the poetic possibilities of objects.