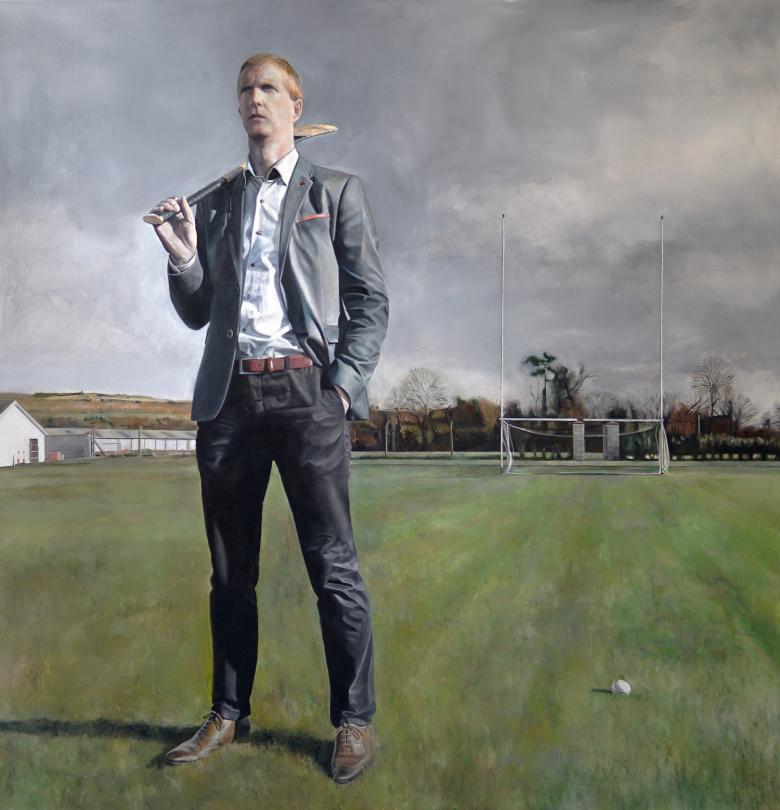 Who is the subject of the portrait?
This portrait is of Henry Shefflin, an Irish hurler born in 1979. Over a sixteen-year career he played centre forward for Kilkenny, and won a record ten All-Ireland medals, thirteen Leinster championship medals and six National Hurling League titles.

How was it made?
This painting was made using oil paints. This is a realist painting which almost looks like a photograph. The artist took his time to accurately reproduce the detail and colours. The sky and grass are richly coloured. To achieve this the artist painted many layers on top of one another until they became deep and realistic colours. This portrait is painted on canvas which is a great surface for oil paints. It is often primed (prepared) with a white material, such as gesso, which gives the surface a lovely paper-like quality. Artists sometimes make their own canvases. First they make a simple wooden frame, then they stretch a piece of canvas material over the frame, securing it with nails or a staple gun.

Why did the artist make this portrait?
Gerry Davis won the Hennessy Portrait Prize in 2016. As part of the prize, he was commissioned by the National Gallery of Ireland to make this portrait. Henry Shefflin retired from inter-county hurling in March 2015. This portrait is a wonderful celebration of his career and achievements.

Now look at the picture again. Do any of these words describe the subject? How would you describe him? Take out a notepad and jot down in your own words how you would make this portrait.