Walls of National Gallery of Ireland light up once again for Culture Night. 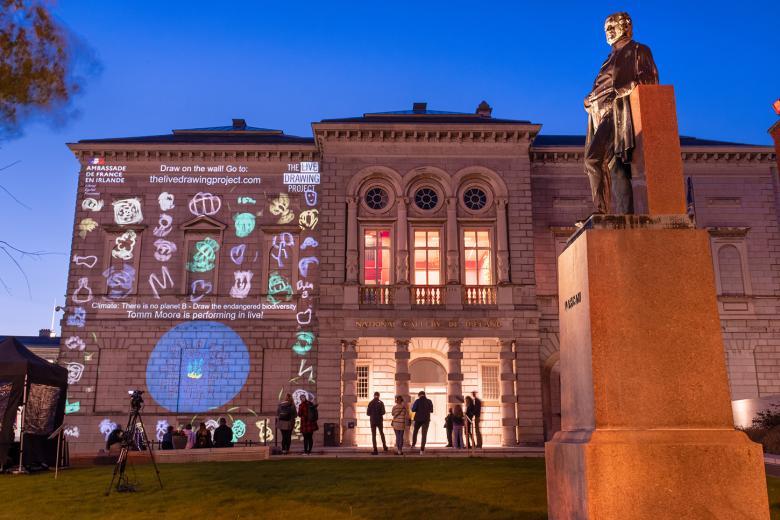 Special installation in association with the French Embassy in Ireland.

The National Gallery of Ireland and the French Embassy in Ireland come together once again to invite members of the public to take part in an interactive drawing session on Culture Night, Friday 17 September 2021. A free online and outdoor event, The Live Drawing Project: Ireland and France begins at 8pm on the walls of the Gallery at Merrion Square.

In this digital journey across Ireland and France, audiences of all ages are invited to create drawings using their phone or tablet as a drawing pad. Drawings can be created via a link to be announced on the day. The drawings will be projected onto the exterior of the National Gallery of Ireland at Merrion Square West, Dublin, and simultaneously be screened at Ireland’s cultural flagship in Paris, the Centre Culturel Irlandais. The creations will also be available for all to view on Facebook Live.

While drawing on various themes, this event will also be an occasion to celebrate Europe and what it means to be European as we invite the audience to share their experiences of belonging to Europe by drawing.

The Live Drawing Project: Ireland and France features a number of well-known Irish and international artists. Artists participating in this year’s event, in order of appearance are:

French Ambassador to Ireland Vincent Guérend said, “As Ireland and France’s relations are getting even stronger, culture has a key role to play. Culture Night provides a wonderful opportunity to connect, interact, release your imagination and curiosity. The French Embassy is delighted to partner with the National Gallery of Ireland and the Centre Culturel Irlandais in Paris to share with everyone "The Live Drawing Project", a fun interactive real-time digital journey bringing Ireland and France even closer. We are also delighted to be part of the European Culture Trail showcasing the diversity of European language and culture. Wherever you are, join us and let’s create and celebrate Europe together!”

For those who can’t make it in person, a range of special online Culture Night activities include: family workshops; virtual Through a Lens tour ‘Costumes & Art’; and ‘Mondrian & Music’, the latest in jazz singer Emilie Conway’s exploration of the great Dutch artist’s musical world. Those at home can participate in the Live Drawing Project throughout the evening.

The Gallery’s outdoor pop-up café, Le Béret, will be open on the night until 10pm. The Gallery Shop will be also open until 8.30pm. The Gallery will be free to enter all day. Frederic William Burton’s popular watercolour Hellelil and Hildebrand, the Meeting on the Turret Stairs will be on display from 6pm-8pm, for Culture Night.