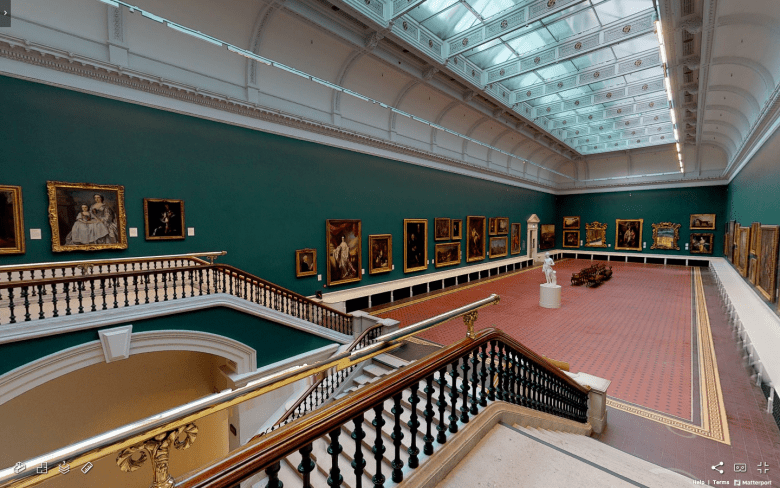 Each work of art in the Grand Gallery has a link to Ireland, whether by artist, subject, sitter, former owner or source of acquisition.

Use your cursor to navigate around the space in the window below.

To see this content here, you will need to accept statistics cookies. Otherwise you can see it here

About the Grand Gallery

The Grand Gallery is dedicated to the eighteenth-century Enlightenment and includes works of art by British, Irish, French, Italian, Spanish, Dutch and Swiss artists. The Enlightenment in Europe and America was partly a reaction to the wars and autocracy of the previous century, represented by Jan Wyck’s monumental depiction of the Battle of the Boyne of 1690.

In the following century, the absolute rule of monarchs was challenged and attempts were made to separate church and state. Intellectuals and politicians sought an era of progress, tolerance, political and personal freedom, alongside literary self-expression and scientific enquiry. The great French Encyclopédie, published in 35 volumes between 1751 and 1772, is a great example of this. The foundation of the [Royal] Dublin Society in 1731, aimed at raising the level of Irish agriculture, art and science, is another. There was also a major expansion in the range and availability of music and theatre.

Each work of art in the Grand Gallery has a link to Ireland, whether by artist, subject, sitter, former owner or source of acquisition.

Descriptions of the paintings

The paintings in this room are listed in our online collection.

This project was generously supported by the Annenberg Foundation.