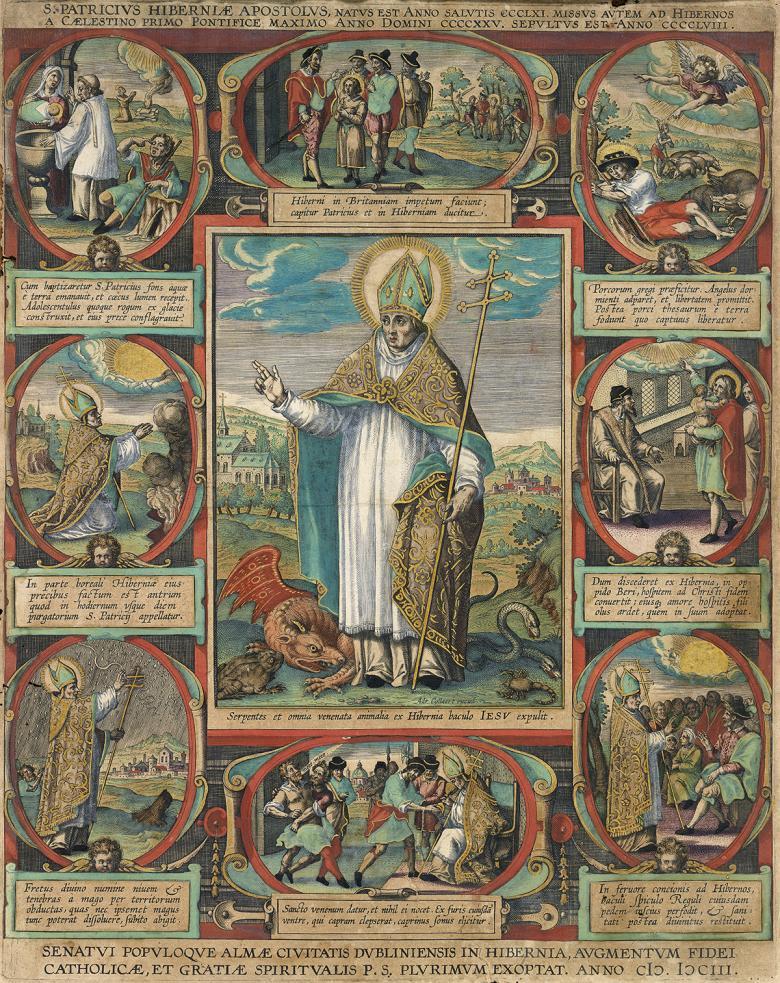 Scenes from the Life of Saint Patrick

This colourful engraving from our collection depicts Ireland's national saint, Patrick. The central image shows Patrick as a triumphant bishop wearing an elaborate cope and mitre, surrounded by the poisonous creatures he banished from Ireland (most people are probably familiar with the legend of Saint Patrick and the snakes, but here we also see the other venomous creatures from which he is credited with ridding the country: the dragon, the toad, and the scorpion). Around the central image, we can see Baroque-style roundels illustrating some of the more dramatic scenes from Patrick's life, some of which are well known, and others less so, which we have detailed further down.

The print, by Flemish engraver Adriaen Collaert (1560-1618) was published in 1603, the year the Gaelic Lord Hugh O’Neill’s uprising was successfully suppressed by English forces. The Latin inscription, which translates as ‘P.S. greatly wishes an increase of Catholic faith and spiritual grace to the Senate and people of the fair city of Dublin in Ireland’, indicates that it was published to encourage Dublin citizens in their faith. It can be seen as part of a wide cultural movement which aimed to promote and further the aims of Catholic Ireland.

Details of Saint Patrick's life come from a number of different sources. Patrick himself wrote about his life in very simple, unadorned terms in his Confessio (which you can read in full here on the RIA website). From the 7th century onwards, however, legends about him written by Muirchú (Vita sancti Patricii) and Tírechán (Studies on the Life and Legend of Saint Patrick) added lots more detail and embellishment to the story of his life, which continued in still later accounts of Saint Patrick, such as those included in Jacobus Voraigne's The Golden Legend (c.1260).

Scroll down to read more about the dramatic life of Saint Patrick, as illustrated by Adriaen Collaert:

THE BAPTISM OF PATRICK, WHEN A BLIND MAN MIRACULOUSLY REGAINS HIS SIGHT 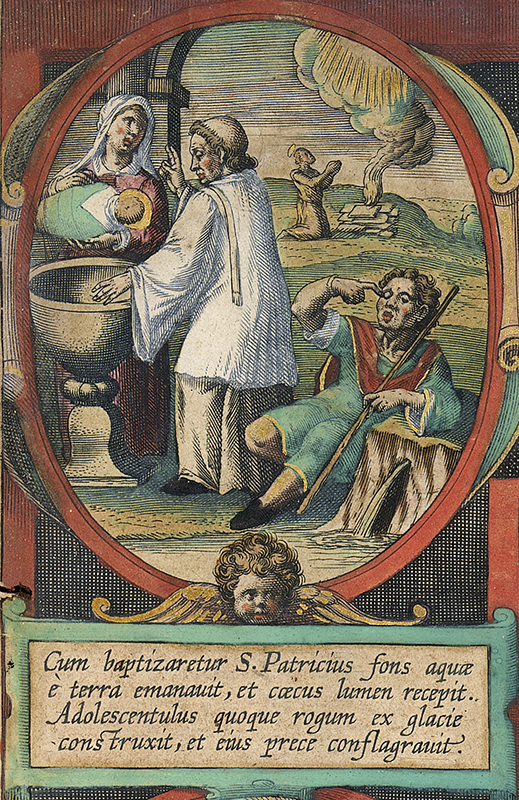 After Saint Patrick was baptised, a fountain sprang of the earth, and a blind man regained his sight. As a grown up he built a grave out of ice and with his prayer he set it on fire.

This story is from the very early life of Patrick, before his arrival in Ireland. It takes place in his home land of Scotland. A man called Gormas, blind since birth, heard a voice commanding him to take the hand of the baby Patrick, who had recently been baptised, and to make the sign of the cross on the ground, from which a new fountain would burst forth which would restore the man's sight. Gormas did as instructed, and his sight was restored.

PATRICK IS KIDNAPPED BY THE IRISH DURING AN ATTACK ON BRITAIN 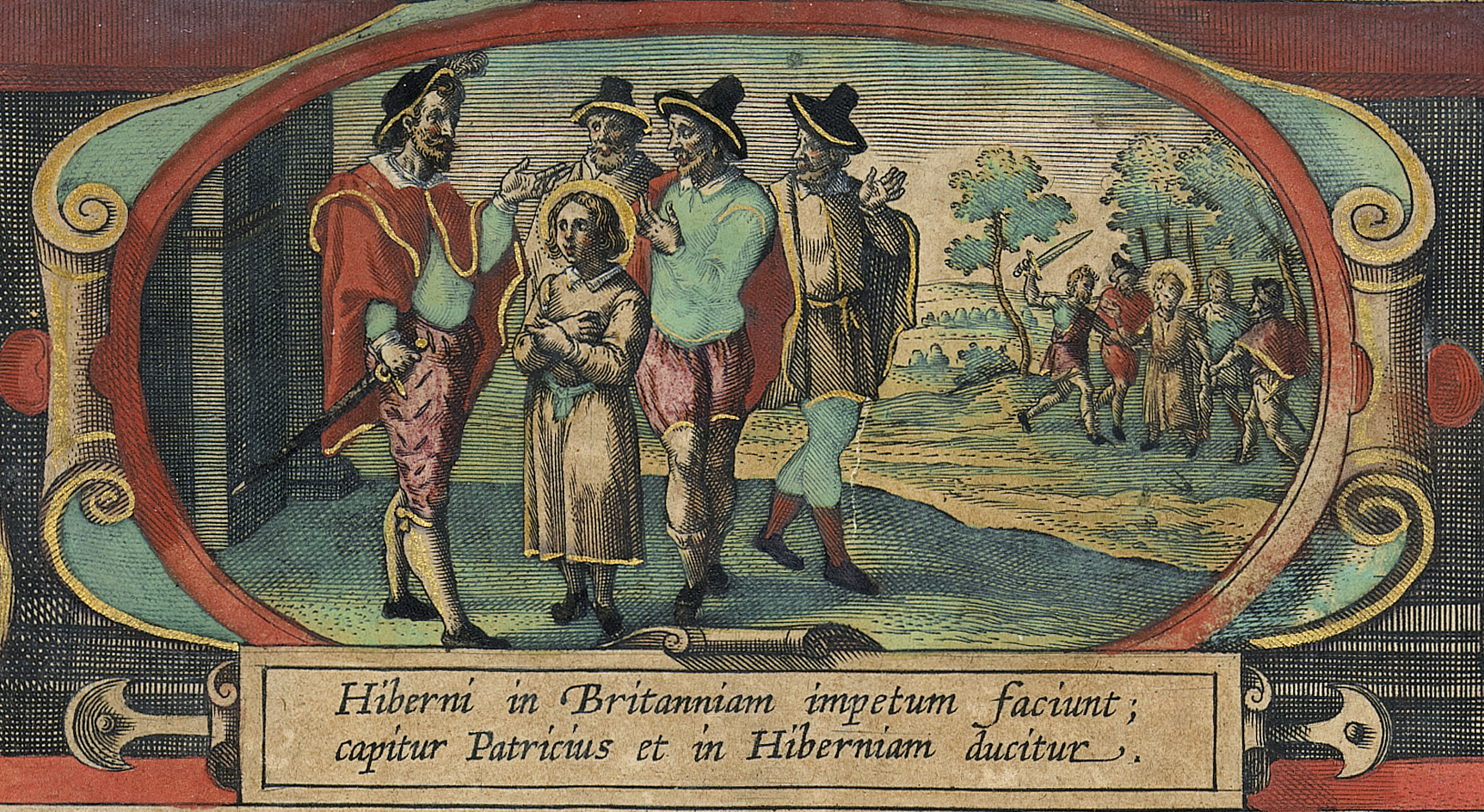 The Irish attacked Britan. Patrick is captured and carried back to Ireland.

In his sixteenth year, Patrick was kidnapped by Irish marauders who had invaded Britain. He was brought back to Ireland where he was sold as a slave to a chieftain called Milcho (Milchu in some accounts), who reigned in the north of Ireland. For six years, Patrick lived in the mountains, tending to pigs, praying to God, and becoming fluent in the Irish language.

AN ANGEL APPEARS TO PATRICK 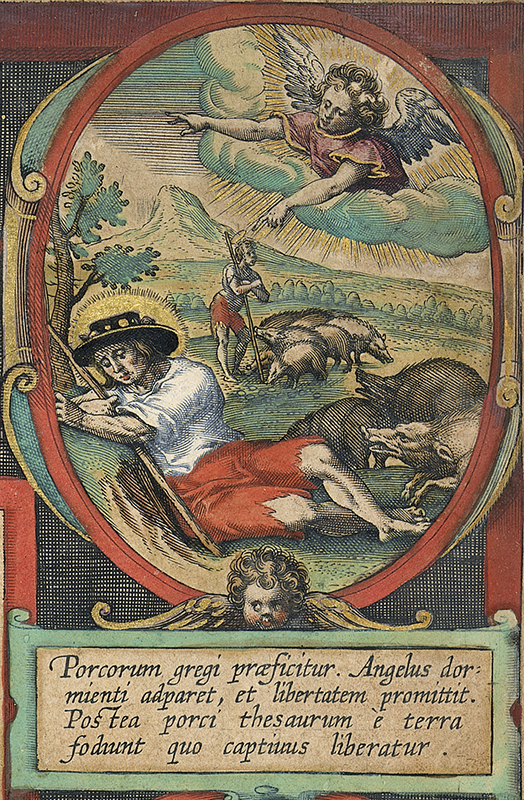 Patrick is placed in charge of a herd of swine. An angel appears while he is sleeping, and promises to free him. After that, the pigs dig out a treasure from the ground, and Patrick is freed.

After six long years in Ireland working as a swineherd, an angel appeared to Patrick in his sleep. The angel told him that he would soon be free, and, that after a prosperous voyage, he would return to his parents. He spoke of a boat, some 200 miles away, which would take Patrick to freedom.

In some versions of the legend (and in Collaert's print) the angel, whose name was Victorious, shows Patrick a hole in the ground where the swine have been digging, and tells him that he will find gold there. Patrick does as he is instructed, and finds gold enough to buy his freedom from Milcho.

PATRICK BEFRIENDS A MAN IN BERUS WHOSE SON HE LATER ADOPTS 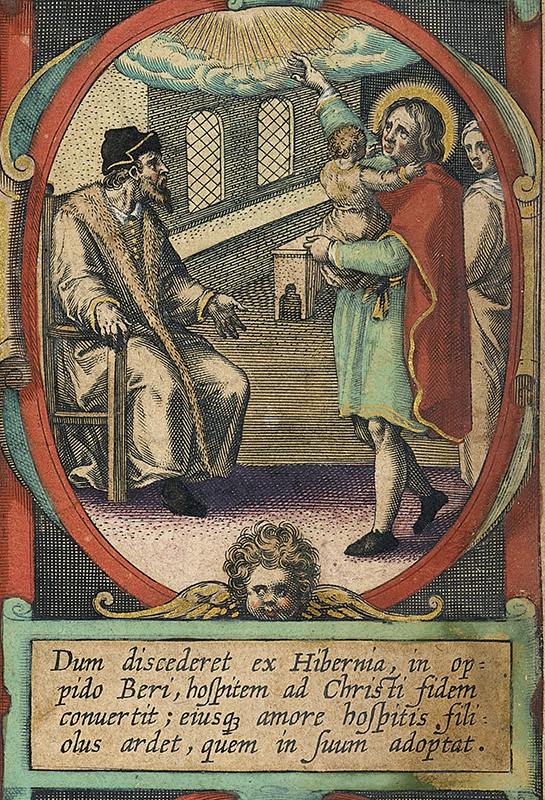 Whilst separated from Ireland he turned to a stranger of the Christian faith in the town of Beri (Berus); with the love of this stranger’s son he burned, and later adopts him.

This is a tale which is told by Tírechán in his Studies on the Life and Legend of Saint Patrick. He writes of Beningus, the young son of a devout man, who becomes Patrick's loyal companion, and later, his successor as the bishop of Armagh. Tírechán goes on to detail a particular incident when Patrick and Beningus were battling two druids, and Beningus, wearing the habit of one of the druid which burst into flames, remained unscathed, while the druid, wearing the habit of Beningus, burns to death. 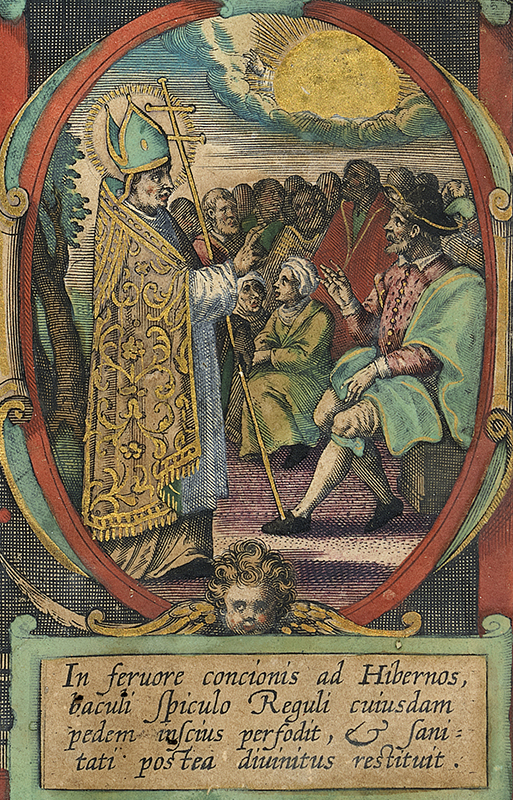 PATRICK PIERCES THE FOOT OF THE KING OF CASHEL WHILE PREACHING

In the burning heat of oration before the Irish, St Patrick unwittingly pierced his staff through the foot of a prince, and subsequently, by divine intervention, restored it.

This incident from Patrick's life is also illustrated in another work from our collection (below), James Barry's 'The Baptism of the King of Cashel by Saint Patrick' (c.1800-01). 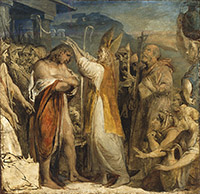 According to the legend, Saint Patrick – while baptising the King of Cashel – accidentally pierced the monarch’s foot with his crozier. The king endured his pain with dignity, refraining from reacting to the injury. Saint Patrick later healed the wound.

PATRICK IS GIVEN POISON WHICH MIRACULOUSLY HAS NO EFFECT, AND A THIEF IS REVEALED WHEN HE STARTS BLEATING LIKE A GOAT

The saint is given poison,but it does not harm him. Out of the thief’s belly, who had stolen a goat, is drawn out the sound/voice of a goat. 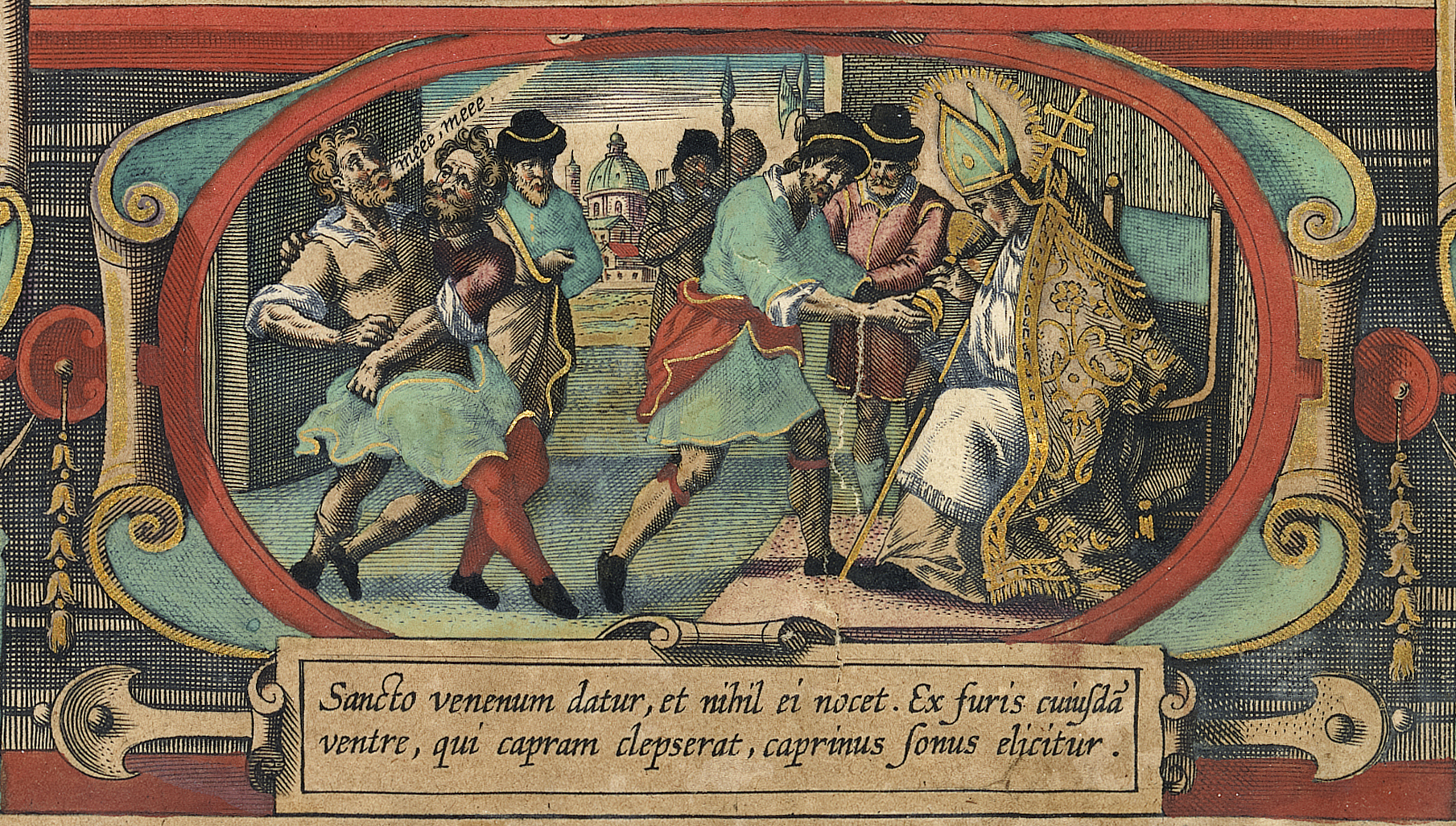 This illustration appears to combine two separate tales from Patrick's life, both of which feature in The Life and Acts of Saint Patrick, by Jocelin of Furness (fl. 1175-1214). In one, Patrick is given a cup of poison, mixed in with wine by a man who Jocelin refers to as "evil-doer Lugaich Mael"  but, invoking the name of God, Patrick is able to separate the wine from the poison, and to drink freely from the cup without harm.

The second tale illustrated here is that of Patrick's goat, who the saint used to carry water. A thief steals the goat, and eats it. The thief denies having stolen (and swallowed!) the goat, but miraculously, as he is denying it, the goat begins to bleat from within his stomach, proclaiming the merit of Saint Patrick. To add insult to injury, the thief then grows 'the beard of a goat'! 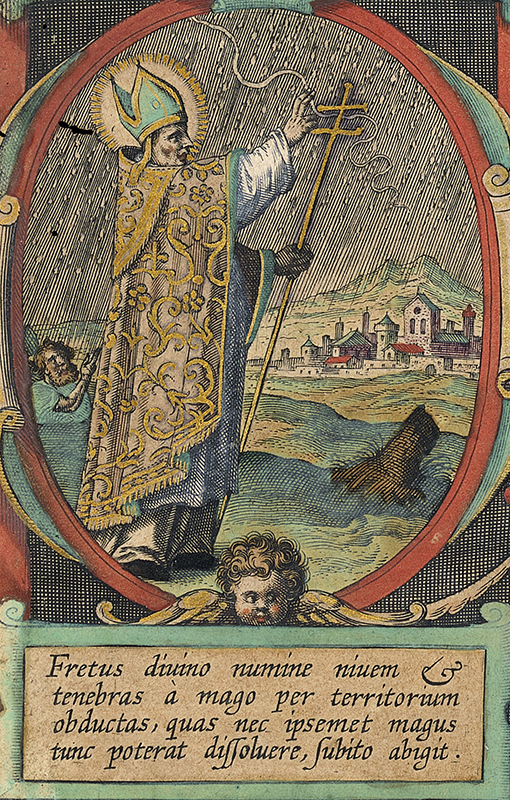 Supported by a divine power he suddenly drives the snow and the darkness which was drawn over the whole country by a druid (magician), and which the druid could not destroy himself then, anyway.

A druid covered the land with snow, and with darkness. Fear and trembling came upon all it covered. Patrick commanded the druid to reverse his spell on the land, but the power of the dark magic was such that the druid was unable to do so. Patrick prayed to God, and immediately the sun rose, the snow disappeared, the darkness dispersed and light shone over the land again. 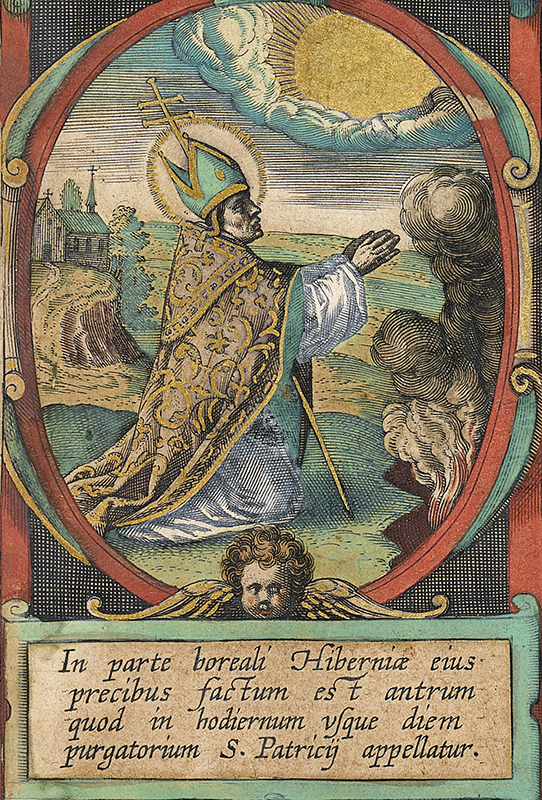 PATRICK CREATES A CAVE IN THE NORTH OF IRELAND THROUGH HIS PRAYERS, CALLED SAINT PATRICK’S PURGATORY

In Voraigne's The Golden Legend, we find out that Patrick prayed to God to send a sign to help him in converting those he could not reach. At God's instruction, he made a circle in the earth with his staff, and a deep pit (sometimes called a cave) appeared. 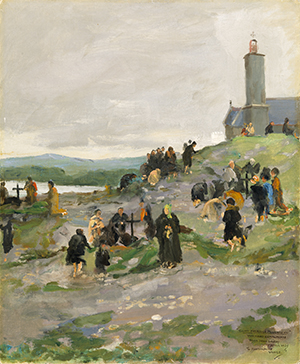