The Marriage of Strongbow and Aoife | Interpretation, meaning, and hidden secrets

Paintings, like history, can be interpreted in many different ways, and debate surrounds the interpretation of this marriage scene.

On one side of the debate are those who believe that Maclise wanted to express his sympathies with the Irish nationalist cause by painting this story: a story which had become particularly resonant for nineteenth-century nationalists who believed it signified England’s first advances into the country. However, others believe that the painting is simply an exercise in high drama and theatricality of a kind that Maclise particularly enjoyed painting.

Those who believe that it was simply the dramatic and theatrical subject matter which appealed to Maclise point to the fact that the painting was executed as part of a commission for the new Houses of Parliament in London, and it was favourably received by the public when exhibited at the Royal Academy. It seems unlikely that the Fine Arts Commission would have stood behind a painting even vaguely critical of British actions in Ireland. Maclise was a successful artist in England – why would he risk his career and reputation? Is it more likely that this historical event provided Maclise with the perfect opportunity to indulge his love of drama and spectacle?

Those who favour a nationalist interpretation call attention to a variety of details in the painting, from the dark and stormy sky, to Strongbow’s foot planted firmly on top of a toppled cross, as outlined below. 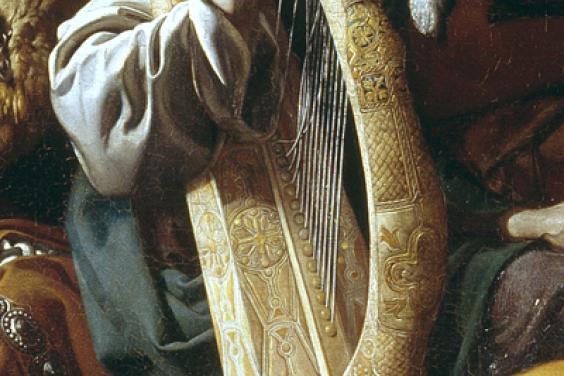 The harp is a recurring motif in Maclise’s work and he may have included it here to demonstrate his technical virtuosity and his antiquarian knowledge. However, he may also have included it to show his Romantic nationalist sympathies. Thomas Moore’s Irish Melodies (published in 1845, with illustrations by Maclise) did much to popularise the harp as a symbol of Irish national identity, with songs referring to the harp as a symbol of Ireland’s past glory. In one, a young bard, believing that the sound of the harp can only ring out in times of freedom, deliberately tears the strings of his harp as invading troops swarm around him. Here we can see a silent harp with broken strings.

Maclise was fascinated with antiquities and always welcomed a chance to include such details in his paintings. The Marriage of Strongbow and Aoife was the perfect opportunity for him to show off his technical skills and knowledge in this area. The precisely rendered gold ornaments worn by the fallen Irish, Aoife, and her bridesmaids, may have been copied from objects owned by the antiquarians Thomas Crofton Croker and George Petrie, whom Maclise had known for a number of years. 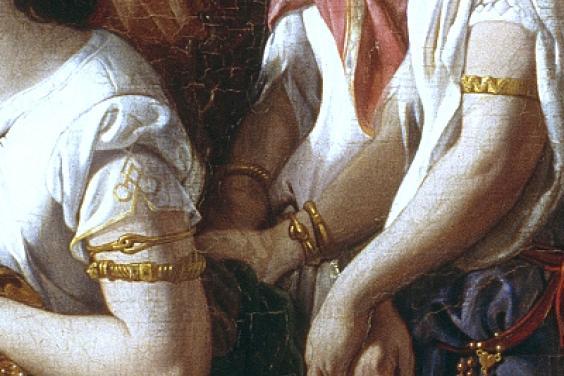 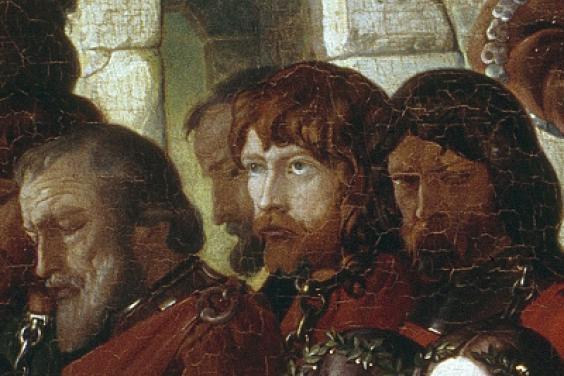 The defeated and subdued Irish chieftains are depicted as prisoners, lined up behind Dermot MacMurrough, with thick metal collars and chains around their necks. They look on, with sad expressions, as the wedding ceremony takes place.

Many of the flowers in the painting can be identified, including the buttercup (Ranunculus acris); the daisy (Bellis perennis); the field poppy (Papaver dubium); the ground thistle (Cirsium acaule); common ivy (Hedera helix); ragwort (Senecio jacobaea). The flowers may have been included simply to display Maclise's versatility and skill in draughtsmanship and use of colour. However, throughout history, the inclusion of flowers in art has symbolised hope, as well as the fleeting nature of life and beauty. 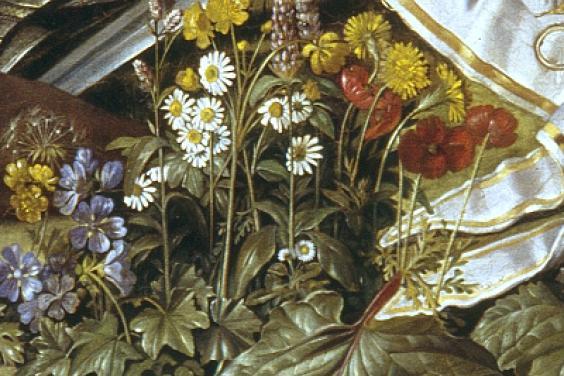 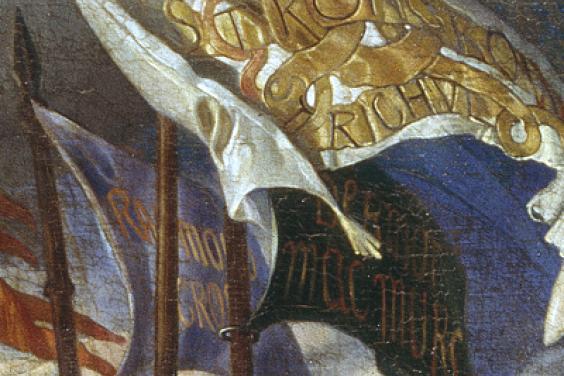 We can decipher the text inscribed on the many banners in the painting. Maclise has included these so that viewers can identify the main characters in the story, such as the names of Anglo-Norman families: Fitzgerald, Fitzstephens, Raymond le Gros, Mountmaurice, Milo de Cogan and Prendergast. Diarmait’s banner is green and is labelled Dermot Mac Much[ada], while Strongbow is inscribed on a white banner decorated with gold snake interlace and the word Striguil.

Although the marriage is taking place in the aftermath of a violent battle, there is very little explicit evidence of bloodshed in the painting. Maclise has arranged the dead in a variety of crumpled poses in the foreground or being carried and buried in the background. The only blood that is clearly visible is one small trickle that appears to flow from the ground on to the inscribed stone slab. This has been read as symbolic of how Ireland has been wounded by this marriage and the chain of events it precedes. 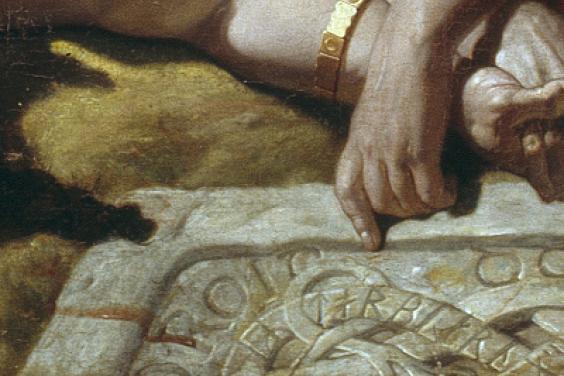