The Marriage of Strongbow and Aoife - the characters

The Marriage of Strongbow and Aoife | the characters 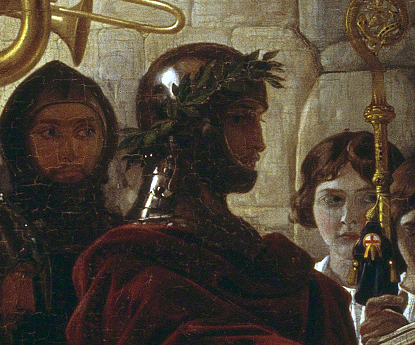 Strongbow (also known as Richard fitz Gilbert and Richard de Clare) was earl of Pembroke and Strigoil, and lord of Leinster. He was the eldest son of Gilbert de Clare, earl of Pembroke, and succeeded to his father’s earldom in 1148.

Dermot MacMurrough, king of Leinster sought Strongbow’s assistance in regaining his power in Ireland. In return he promised Strongbow his daughter Aoife in marriage. Strongbow landed in Ireland on 23 August 1170 and attacked Waterford with a force of some two hundred knights and one thousand other troops. Aoife and Strongbow were married at Christ Church Cathedral soon after Waterford was seized.

MacMurrough died in Ferns in May 1171, at the height of his power, leaving his kingdom to Strongbow. Strongbow died in late May 1176. By some accounts he was buried in Christ Church, Dublin but, according to others, he is buried in Gloucester. 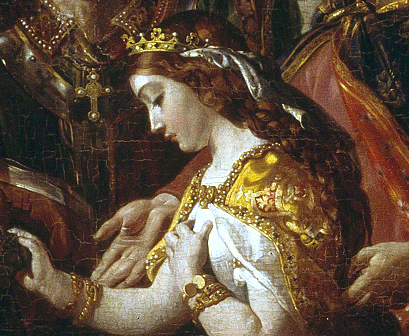 Aoife (Aífe, Eva) was the daughter of Dermot MacMurrough, king of Leinster. In 1168 her father arranged her marriage to Richard de Clare (Strongbow) in return for military assistance from the Anglo-Normans. According to Brehon law, an Irish woman could not be forced into marriage, therefore it is presumed that Aoife agreed to the arrangement. She would have been about seventeen years old at the time. The marriage took place after the city of Waterford was seized in August 1170. Strongbow and Aoife had a son, Gilbert, and a daughter, Isabella.

Aoife did not remarry after Strongbow’s death in 1176. She was buried in Tintern Abbey, Monmouthshire, alongside her father-in-law, Gilbert fitz Gilbert. Her son Gilbert died c.1185, and in 1189 her daughter Isabella, now Strongbow's heir, was promised in marriage by King Henry to William Marshal earl of Pembroke, regent of England and lord of Leinster. 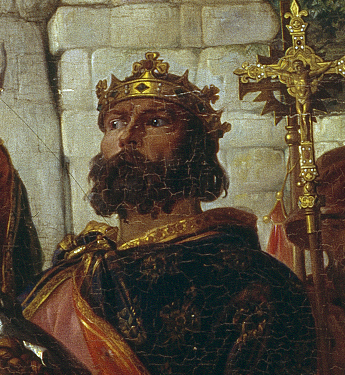 Dermot MacMurrough (Diarmait Mac Murchada) was a Gaelic lord and king of Leinster. He married his second wife, Mór, c.1152 and they had two children, Aoife and her brother Conchobar.

Dermot was an ambitious man who was eager to extend his territory, resulting in many battles, abductions and power struggles over the years. He was eventually banished from Ireland as punishment for abducting his rival’s wife, Derbfhorgaill. In 1168 he sought Strongbow’s assistance in regaining his power in Ireland, and offered him his daughter’s hand in marriage. After Dermot’s death in 1171 the kingship of Leinster went to Strongbow.

The most contemporary sources for information on Dermot and his arrangements with Strongbow are Expugnatio Hibernica (The Conquest of Ireland) written by Giraldus Cambrensis in the twelfth century, and The Song of Dermot and the Earl, a French narrative poem, written in the late twelfth century. Geraldus described Dermot as '…tall and well built, a brave and warlike man among his people, whose voice was hoarse as a result of constantly having been in the din of battle'.

Despite being a patron of the church, and founding abbeys at Baltinglass and Kilkenny, Dermot is remembered mostly in a negative light, and is described in his obituary in the Annals of Tigernach as fer buaidhirtha na Banba ocus aidhmillti Erenn (the disturber and the destroyer of Ireland).