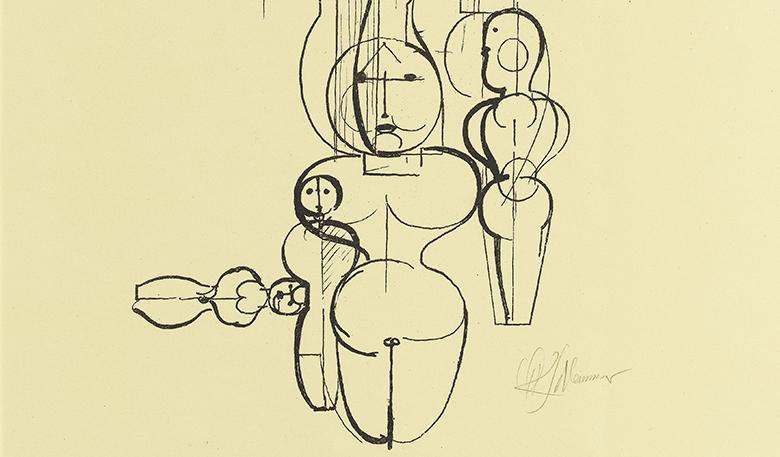 This year marks the 100th anniversary of the founding of the Bauhaus in Weimar, Germany. To celebrate this centenary, we had an exhibition - Bauhaus 100: The Print Portfolios - on view from 20 July to 1 December 2019.

Although the school was only in existence for 15 years, its impact continues to be felt in our everyday lives. Read on for a whistlestop look at just some of the things in the world around us that we have the Bauhaus to thank for!

Do you have an open-plan living area? Then you can thank the Bauhaus! Open-plan domestic living was pioneered by Bauhaus director Mies van der Rohe and designer Lily Reich, who popularised the idea of having areas separated simply by movable partitions and hanging fabrics.

Bauhaus-influenced architecture is all around us: spare, rectangular structures, with glass and steel facades have their roots in the Bauhaus, and the forced exodus of many of the artists involved in the movement following the closure of the school by the Nazi regime in 1933 meant that this aesthetic spread with them and informed the architectural identity of the cities to which they dispersed, like Chicago and Tel Aviv.

Fitted kitchens and their principles of design integration and flush worktops owe a debt to the Bauhaus, and in particular to Benita Otte, who showcased just such a kitchen in Haus am Horn, the experimental residential house built as part of the first Bauhaus exhibition in 1923.

Although we might think of IKEA furniture as quintessentially Swedish, in reality many of their designs owe an enormous debt to the Bauhaus, from globe lamps (originally conceived by Max Bill) to tubular steel chairs (Marcel Breuer). So strong is this influence that the curators of the Dessau Bauhaus have recently used some IKEA furniture in their showpiece student rooms!

The impact of the Bauhaus movement can also be seen in fashion, from colour choices, cut, and style. The archetypal geometric bob of the 1960s created by Vidal Sassoon has its origins in the Bauhaus, with Sassoon crediting a meeting with Bauhaus architect Marcel Breuer with inspiring him.

Lady Gaga and David Bowie are just two artists who have taken some statement dressing cues from the outrageous creations of Oskar Schlemmer for his famed Triadic Ballet, while recent collections from designers Mary Katranzou (AW18) and Roksanda Ilincic have directly referenced the Bauhaus. The high street is not immune to the reach of Bauhaus either - Cos recently unveiled a capsule ‘Bauhaus’ collection to mark the centenary of the school.

It would be difficult to overestimate the influence of Bauhaus design on familiar brands and products. When you visit our exhibition (on view until 1 December 2019), you'll find out lots more about the style of typography and graphic design which the Bauhaus is known for, but for an example of this design aesthetic in the everyday, you need look no further than the clean lines, minimalist aesthetic and use of new material an technology of the Apple iPhone! Steve Jobs once said of Apple, “The product design, the advertising, it all comes down to this: Let’s make it simple. Really simple.”, a sentiment which is in harmony with the Bauhaus motto to ‘Rethink the World’ through art and design .

Discover lots more about the fascinating world of the Bauhaus at our exhibition Bauhaus 100: The Print Portfolios, but hurry - it must close on Sunday 1 December 2019!