A photograph can tell a powerful story 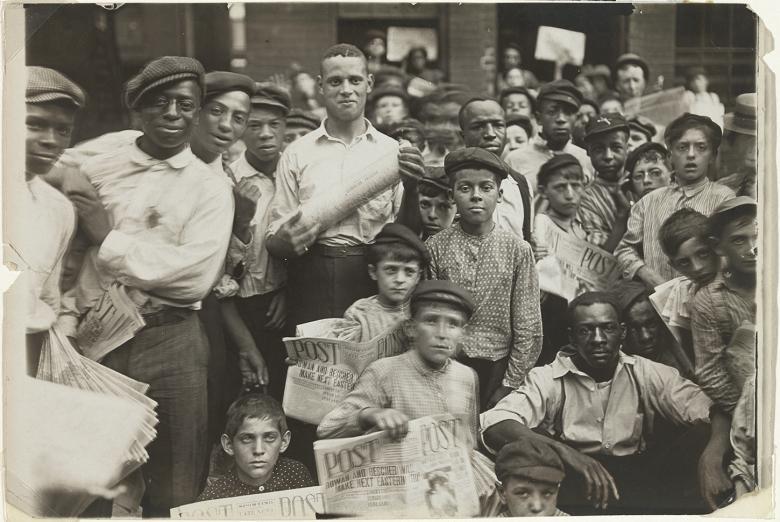 “For many years I have followed the procession of child workers winding through a thousand industrial communities, from the canneries of Maine to the fields of Texas. I have heard their tragic stories, watched their cramped lives and seen their fruitless struggles in the industrial game where the odds are all against them.” Lewis W. Hine, 1914

In the early twentieth century, photographers started to use the camera as a tool for social change, shedding light on injustice and inequality in society. One such photographer was Lewis Wickes Hine (1874–1940), a teacher in New York City, who played a key role in the campaign to abolish child labour in the United States.

In 1900, the US census revealed that more than 1.75 million American children under the age of 14 were working across the country in mills and mines, fields and factories, to help support their families. Many did not have access to education, and they were putting their health, and even their lives, at risk working long hours with dangerous machinery, or in toxic environments.

The National Child Labor Committee (NCLC) was established to raise public awareness and to campaign for the end of this child exploitation. The Committee hired Lewis Wickes Hine to work as an investigator and photographer, travelling the length and breadth of the country documenting the miserable working conditions of children. He often worked undercover, pretending to be a salesman or photographer documenting machinery, in order to get past suspicious supervisors and business owners.

The exhibition Moment in Time features one of Hine’s photos of newsboys in Cinncinatti (above). In this small print, a group of young men, teenagers and small boys cluster and jostle into the picture frame. Across their faces, a range of emotions: confidence, suspicion, wonder, apprehension, curiosity, weariness. Some stare directly into the lens of the camera, others look off camera, seemingly distracted, perhaps by the photographer’s flash lamp apparatus.

Speaking at a conference on child labour in 1914, Hine described the children who ended up in street trades:

“Children too young for other jobs, or unable to find them, went into ‘street trades’—often in addition to school work. Very young children working as newsboys, telegraph boys and bootblacks were a common sight.”

The life of a newsboy or girl, or ‘newsie’ as they were known, on the streets of American cities, was very different to the life of a suburban child who delivered papers after school for some pocket money. The newsies worked long days, into the small hours, braving treacherous weather conditions and dangerous interactions with adults in saloons. Hine spoke about these dangers:

“The street boy seems so well able to take care of himself that sympathy is abundant for the little newsie who seems to need our patronage, and in our superficial way we drop a nickel in his hand and hurry on, not realising that his bundle of papers is an open sesame to all kinds of baleful influences which train him in the ways of the world. He knows saloon life, he gambles, he wastes his money, he becomes acquainted with the underworld.”

Hine kept notes and wrote captions for his photographs, recording details about the children, and sometimes their own words. These captions also reveal Hine’s empathy for the children and their plight:

"Photograph of 5 year old Willie (William Frederick Tear, 490 Louisiana Ave.) one of Washington's youngest news-boys. He is a kind of free-lance, helps other boys out, and roams around the city on his little velocipede, with all the recklessness of extreme youth. Gets lost occasionally. He was so immature that he couldn't talk plain, and yet he was pretty keen about striking people for nickels." [See the photo of Willie here]

As part of the NCLC's public awareness campaign, Hine's photographs were distributed to the press, reproduced in books, journals and pamphlets, and displayed in educational exhibitions. His work, ultimately, contributed to the first child labour bill, the Keating-Owen bill, being introduced in 1916 (though the law was later ruled unconstitutional). By 1920, the number of children working in the United States had significantly reduced.

Sadly, Hine's poignant photographs, taken over 110 years ago, remain all too relevant today. In 2019, the United Nations reported that 152 million children remain trapped in child labour.

“Whatever industry saves by child labor, society pays over and over.” Lewis W. Hine, 1914

You can see six photographs by Lewis Wickes Hine, including his portraits of immigrants on Ellis Island, New York, in Moment in Time: A Legacy of Photographs | Works from the Bank of America Collection.