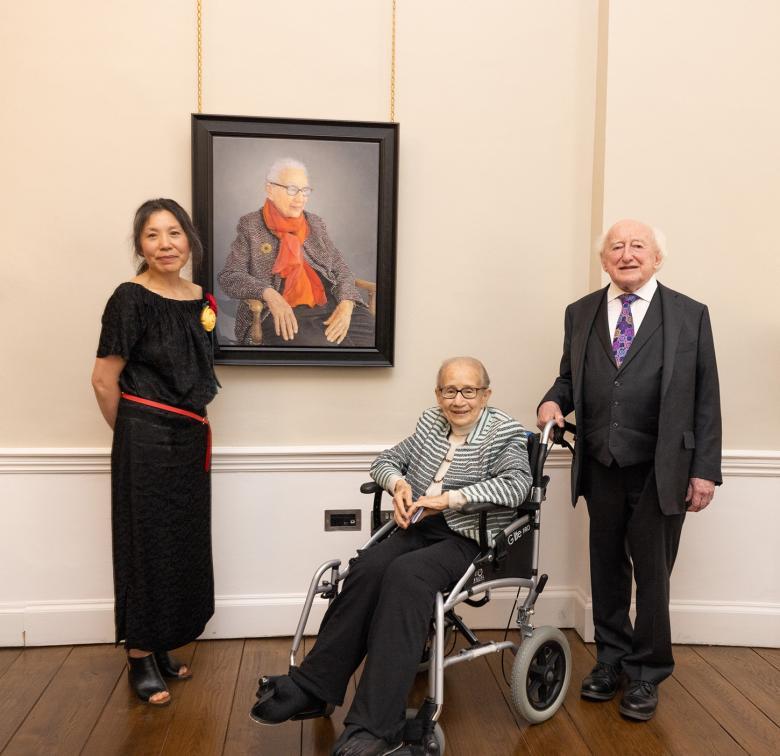 A new acquisition at the National Gallery of Ireland celebrates the contribution to Irish society by former Supreme Court judge Catherine McGuinness.

A portrait of the highly respected and much admired Justice McGuinness, commissioned by fellow members of the legal community and painted by artist Miseon Lee, is the latest addition to the national portrait collection at the Gallery. Catherine McGuinness (b.1934), former Supreme Court Judge and member of the Council of State of Ireland, an oil painting, was unveiled this evening (11 July 2022) in the presence of the President of Ireland, Michael D. Higgins.

Catherine McGuinness (née Ellis) was born in Belfast and educated at Alexandra College, Trinity College Dublin and the King’s Inns. She was called to the Bar in 1977, and to the Inner Bar in 1989. She worked for the Labour Party in the 1960s, but was elected an independent candidate to Seanad Éireann for the Dublin University constituency in 1979, and served a senator until 1987. In 1988, she was appointed to the Council of State by President Patrick Hillery, a position she held until 1990. In 1994, she became the first woman to be appointed as a judge of the Circuit Court, and two years later was elevated to the High Court. In January 2000, she was promoted to the Supreme Court, where she served as a judge until 2006. She was appointed adjunct professor of law at NUIG in 2005, and in the same year became President of the Law Reform Commission, a position she held until 2011.

In 2009, McGuinness received a Lord Mayor’s Award for her ‘contribution to the lives of children and families through her pioneering work’, and was chosen as one of the People of the Year the following year. McGuinness has served on the Employment Equality Agency, the Forum for Peace and Reconciliation, the National Council of the Forum on End of Life in Ireland, and in 2011 was appointed Chairperson of the Campaign for Children. She has given her name to academic fellowships and prizes at the Children’s Rights Alliance, and the University of Limerick.

Artist Miseon Lee lives and works in Dublin and is a portrait specialist. She has been shortlisted for the annual portrait prize at the National Gallery of Ireland on three occasions and the BP Portrait Award at the National Portrait Gallery, London twice. She has shown her work in both solo and group shows in Ireland, the UK and South Korea. Her work was also shortlisted for the Sky Arts Portrait Artist of the Year in 2013, and the Davy Portrait Awards in 2010. She was awarded the James Adam’s Salesroom Award and the Keating/McLaughlin Award for Outstanding Artwork at the RHA in 2010 and 2012 respectively.

Sean Rainbird, Director of the National Gallery of Ireland, commented, “To add this impressive work by highly respected artist Miseon Lee to the national portrait collection today is  a pleasure. Justice Catherine McGuinness is an inspiration to so many, and we are thrilled to be able to display this portrait of her on the walls of the National Gallery of Ireland. We are grateful to the generous private donor who has made this acquisition possible. Our colleagues in the Gallery’s Development team are always happy to start a conversation about ways to support the future of our institution and the national collection, so I encourage anyone who might be interested in finding out more to get in touch.”

Catherine McGuinness (b.1934), former Supreme Court Judge and member of the Council of State of Ireland will be on display in the National Gallery of Ireland’s Room 23 from 12 July 2022. Entry to the national collection is free for all to learn and be inspired. Find out more at www.nationalgallery.ie.

To support the National Gallery of Ireland go to www.nationalgallery.ie/join-and-give

Information about the portrait: