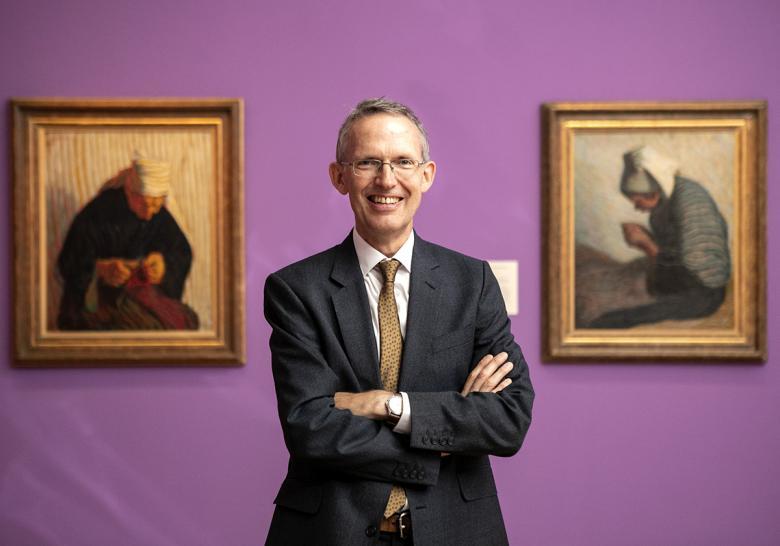 Jonathan Benington, curator of 'Roderic O'Conor and the Moderns. Between Paris and Pont Aven' pictured in the exhibition space.Credit

Roderic O’Conor and the Moderns. Between Paris and Pont-Aven is now open to the public at the National Gallery of Ireland. Featuring more than 60 works of art from the Roscommon-born artist and his contemporaries, the exhibition delivers a glorious array of summer landscapes, rustic still lifes and portraits of local Breton characters. Co-curator Jonathan Benington opened the exhibition at a private reception on Tuesday 17 July.

This is the first major retrospective of O’Conor’s paintings and graphic works in 30 years and will include some paintings that have never before been shown in Ireland. His work was admired by many creative people, including the late David Bowie, who was an art enthusiast, and Bono, who described him as a “genius”.

An experimental and accomplished artist, O’Conor was one of the first to recognise Vincent van Gogh’s talent, and was a friend of controversial French artist, Paul Gauguin. Works from both men will hang alongside colourful French scenes, portraits, and striking etchings created during O’Conor’s most creative years in Pont-Aven, Brittany from 1886 to 1904.

The exhibition is curated by head curator at the National Gallery of Ireland, Brendan Rooney, and author Jonathan Benington.

Commenting, Dr Rooney said: “Roderic O’Conor was a champion of the modern and passed on his innovations to many of the artists with whom he collaborated. His contribution to this period should not be underestimated. He had a distinctly personal style, with a bold treatment of line and colour. Painting in expressive parallel lines, or stripes, from 1892, he adapted a feature of Van Gogh’s late landscapes. However, not satisfied with being affiliated to the most progressive developments of his time, O’Conor became a significant contributor to them.

Director of the National Gallery, Sean Rainbird said: “We are absolutely delighted to bring this fascinating exhibition to Ireland. Roderic O’Conor and the Moderns has been curated through the goodwill, generosity and expertise of cultural institutions, private collectors, museum professionals, scholars and dealers from around the world. Highlights include O’Conor’s Field of Corn, Pont-Aven, 1892, on loan from the Ulster Museum; Van Gogh’s Wheatfield with Cornflowers, 1890, from the Fondation Beyeler, Basel; and for the first time in Ireland, Paul Gauguin’s Bowl of Fruit and Tankard before a Window, c.1890, from The National Gallery, London.

“This is an absorbing and delightful exhibition that gives people the chance to experience for themselves the genius of O’Conor’s work.”

Roderic O’Conor and the Moderns opened at the National Gallery of Ireland on Wednesday 18 July and runs until Sunday, 28th October 2018. Tickets cost €15/€10/€5 and Friends of the National Gallery of Ireland and children under 16 go free. A programme of events of interest to all ages will also run in parallel, featuring lectures, podcasts, intergenerational events, music, talks and pop-up sketching. Visit www.nationalgallery.ie for further details.

About Roderic O’Conor:
Roderic O’Conor (1860-1940) was born in Co Roscommon, but moved to France, working between Paris and rural art colonies such as Grez and Pont-Aven. His cutting edge Post-Impressionist style in the early 1890s was unmatched by any of his English-speaking contemporaries. The exhibition curators have selected some of his very best works from the 1890s - many not previously seen in public – drawn from public and private collections, including Tate, the Museum of Modern Art, New York, and the Norton Simon Museum, Pasadena. The exhibition celebrates O'Conor as an artist of international standing, operating on a European stage. The strength of his artistic connections is demonstrated for the first time by placing his work in context, alongside that of Vincent Van Gogh, Paul Gauguin, Émile Bernard, Maurice Denis, Paul Sérusier, and Armand Seguin.

Van Gogh and O’Conor:
O’Conor was among those who appreciated Vincent van Gogh’s talent long before the Dutch artist gained mainstream recognition. New research by exhibition co-curator Jonathan Benington reveals O’Conor’s privileged early access to Van Gogh’s oeuvre at the Parisian flat of his brother Theo in 1890. Van Gogh died in July of that year, and only two months later, O’Conor attended a memorial exhibition, seeing his work in quantity for the first time. Responding to Van Gogh’s exaggerated colours and expressive brushwork, O’Conor adapted elements of his style to suit his own vision, painting alternating stripes of pure colour, intended to mix optically, like the dots of the pointillists. Over the next two years, O’Conor experimented with stripes and adopted it across all media, including ink drawings and etchings.

O’Conor and Gauguin:
Included in the exhibition is Pierre Girieud's painting Homage to Gauguin, 1906, which features O’Conor as one of Paul Gauguin’s ten most dedicated followers. During Gauguin’s last season in Brittany, he and O’Conor became friends. In May 1894, the pair were involved in a brawl with sailors in Concarneau, in which Gauguin broke his ankle. When Gauguin recovered, O’Conor allowed him to use a studio at the manor of Lezaven, and Gauguin based part of a picture on one of O’Conor’s drawings. Gauguin presented O’Conor with affectionately inscribed prints, and invited him to travel with him to the South Seas. O’Conor declined. O’Conor later experimented with using paint more fluidly, deploying warm colours reminiscent of Gauguin’s Tahitian landscapes.