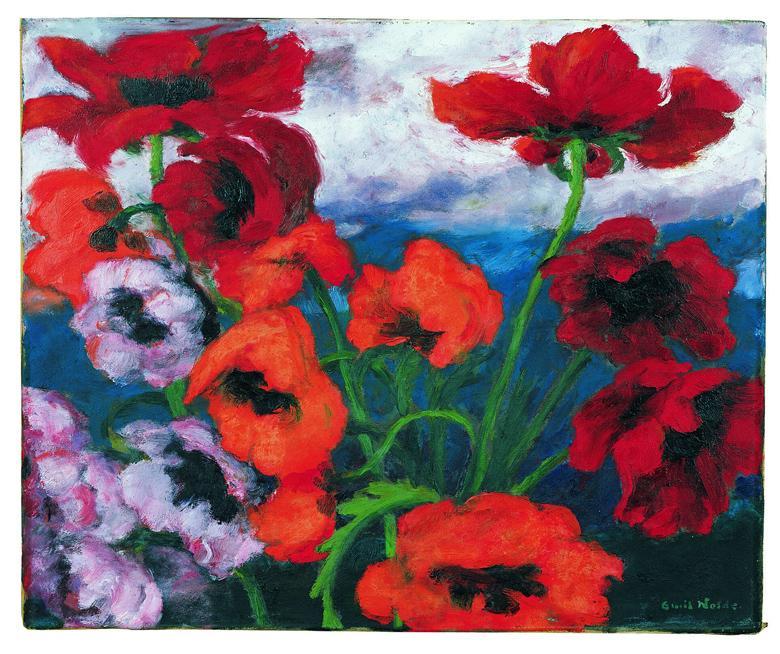 The exhibition will comprise over 120 paintings, drawings, watercolours and prints, specially selected from the Emil Nolde Foundation, the artist’s former home in north Germany. It will span Nolde’s career from his early atmospheric paintings of his homeland, right through to the intensely coloured oils, to his so-called ‘unpainted pictures’ – works done on small pieces of paper during the Third Reich, when Nolde was branded a ‘degenerate’ artist and forbidden to work as a professional artist. The works on show will also include Nolde’s famous flower and garden paintings and his extraordinary religious paintings, with their mix of spirituality and eroticism.

A highly distinctive and extravagantly gifted artist, Nolde was a master of colour and many print techniques. This exhibition builds on the success of the Edvard Munch show held in the National Gallery of Ireland in 2009, showing the works of another great northern Expressionist artist of the period.

The exhibition is grouped into themes: Idea of Home; the Metropolis; Conflict and Ecstasy; the South Seas and the Exotic; and Sea and Garden pictures. Over forty oil paintings and fifty works on paper will be shown alongside examples of Nolde’s work from the Gallery’s collection. Among the oil paintings included in the show are Exotic Figures II (1911); Candle Dancers (1912); Two Women in a Garden (1915); Paradise Lost (1921); and Large Poppies (Red, Red, Red) (1942). Nolde’s ‘unpainted pictures’ will include Singer (in a green dress) (1910-11) and Aboriginal Man Swimming (1914), alongside his woodcuts Prophet (1912) and Young Couple (1913).

Sean Rainbird, Director of the National Gallery of Ireland, says:
“We are thrilled to be able to collaborate with the Scottish National Gallery of Modern Art and show an exhibition of work by Emil Nolde, one of the pre-eminent German expressionist painters of the first half of the twentieth century. We look forward to welcoming Gallery visitors from Ireland and oversees to take in the breadth and talent of this remarkable artist.”

Emil Nolde (1867-1956)
A painter, printmaker and watercolourist, Nolde (born Emil Hansen) was one of the pre-eminent German artists of the first half of the twentieth century. He was briefly a member of Die Brücke (The Bridge), one of the two major Expressionist groups, but remained one of the most independent artists in Germany. Throughout his career he returned to the essence of the landscape he grew up in and made his permanent home in Seebüll, in Schleswig-Holstein, on the border region between Germany and Denmark. In 1902 he married Danish actress, Ada Vilstrup, and took the name of his birthplace, Nolde.

The flat, windswept fields, prominent skies and nearby turbulent seas of the North Sea were as central to his experience of landscape as the extensive garden he cultivated at his studio and home. While rooted there, he also spent months of each year in Berlin, observing the performers and audiences in the theatres and cabarets. His observation of people embraced the farmers of his homeland, the indigenous peoples of German New Guinea, which he visited in 1913-14, and his depictions of biblical stories.

Although an early and committed member of the National Socialist party, the regime’s cultural policies as determined by Goebbels during the mid-1930s led to his art being declared ‘degenerate’. Forbidden to exhibit and work, he nonetheless painted a celebrated group of ‘unpainted paintings’ rich in colour and fantastical figures. Nolde’s complexity as an artist living through turbulent times, supporting the Party ideology but rejected by the government as a ‘degenerate’ modern artist, makes his career as problematic as it is also celebrated.

Following the death of his first wife Ada, in 1946, he remarried to Jolanthe Erdmann. He died in Seebüll in 1956 having set up the Nolde Foundation that cares for a large number of his works.

Emil Nolde - Major Exhibitions
In 1964, the Royal Hibernian Academy (RHA) in Dublin held an exhibition of Nolde’s work entitled ‘Urban 405’. The last major exhibition in the UK was at the Whitechapel Art Gallery in London (1995-96). There was a major retrospective at the Städel Museum, Frankfurt in 2014, and the largest exhibition of Nolde’s work outside of Germany went on display at the Belvedere in Vienna in 2013, with around 170 loans. Other exhibitions of his work have taken place in Paris (2008-9), Oslo (2012) and Sweden (2015).

Is féidir an leagan Gaeilge den phreaseisiúint a léamh anseo.