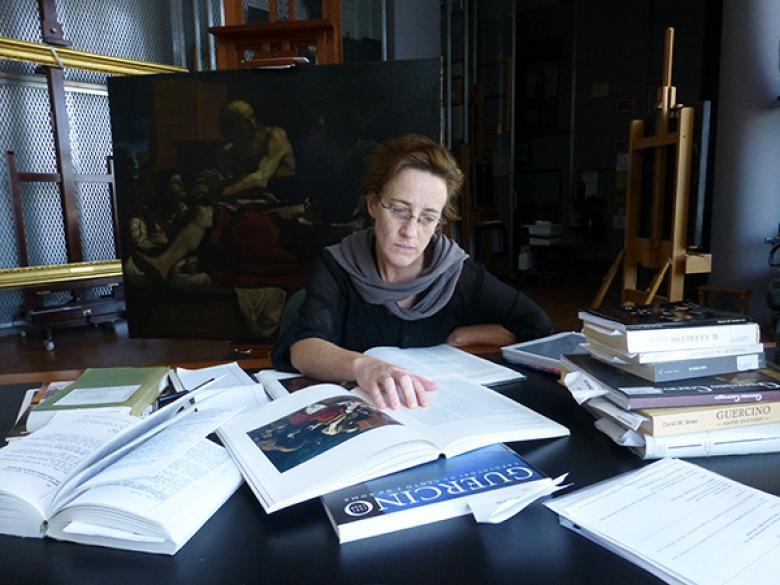 In preparation for conserving 'Jacob Blessing the Sons of Joseph', the Getty’s associate conservator Devi Ormond researches the history of the painting. Photo © Getty.Credit

An Irish Conservator in Los Angeles

Irish woman Devi Ormond is an Associate Conservator of Paintings at the J. Paul Getty Museum, Los Angeles. As part of a two year long conservation and research collaboration between the Getty and the National Gallery of Ireland, Devi worked on Guercino's Jacob Blessing the Sons of Joseph, which is part of our collection. The painting, now fully restored, can be seen in Room 41.

We spoke with Devi to find out about how she first got interested in conservation, memorable projects she has worked on, and what working in the Getty is like, among other things:

On first getting interested in conservation: It goes back to summer holidays as a child, going to Paris and being taken to museums with my parents, and experiencing an overwhelming feeling that I wanted to touch the paintings – it was instinctual! Then, as a teenager sometime in the 1980s, when I saw a documentary on the conservation of the Sistine Chapel I clearly remember thinking “wow! Imagine being so close to something so beautiful, and getting paid for it.”, and that never really left my mind.

On gaining confidence to follow your passions: Even though I was interested in art, I studied English and French in Trinity College Dublin which was not really related at all. I was quite shy, a little insecure, and not having pursued the sciences, I kind of pushed aside my interest in conservation and tried to find a different path. After university I went to the Middle East to teach for a few years, grew up a bit, gained some confidence, and decided that I was going pursue the conservation path. When I returned to Ireland, I got in contact with a paper conservator at the National Gallery of Ireland, Maighread McParland, who was great. She sat me down and showed me all the courses that were available to me. At that stage I was 26, and didn’t really want to go back to do a four-year course, so I decided on the two year MA in Newcastle, Northumbria. I did a chemistry course, studio art, and took art history classes, and unbelievably, I was accepted. Before I started, Andrew O’Connor, who was the National Gallery of Ireland’s paintings conservator at the time, very generously offered me six weeks pre-programme experience. It was really great, getting to see how everything worked in the studio, assisting in frame conservation, and getting to know the wonderful conservation staff - I shall always be grateful to him for giving me that opportunity!

On an international career, from Ireland to LA, via London, and Amsterdam: After finishing my MA, I went on to the Hamilton Kerr Institute for two years, a department of the Fitzwilliam Museum in Cambridge University. Following that, I got a job in a private studio in Amsterdam, and while I was there, a position came up in the Kröller-Müller Museum, and I was asked to restore two Van Gogh paintings, which was amazing! I never thought that I would ever be so lucky as to get close to a masterpiece. I only had time to clean one painting because I was offered a position at the V & A for a year. When I went there, I really learned an enormous amount – we were re-installing the 19th century paintings gallery, so as a team of three staff members, and interns, we had a year to get 200 paintings ready for display. It was during that time that my interest in 19th century works began to develop. After that year, the Kröller-Müller Museum asked me back, and in 2005 they sent me out to the Getty as a guest conservator for three months. The Getty and Los Angeles made a big impression on me.

On a crazy decision: During my stay at the Getty,  the Van Gogh Museum  approached me to carry out research on early van Gogh paintings for three months, which developed into a permanent position. I stayed for seven years, carrying out technical research – we were looking at Van Gogh’s studio practice and those of his contemporaries. It was a fantastic experience and I learned a great deal about late 19th-century French painting practice. I loved the research but the time spent on practical conservation was not enough for me - I started to yearn for more practical work at the easel! When the Getty approached me with the offer of a three-year position, I saw it as an opportunity to increase my practical work experience - the research involved was carried out purely to facilitate cleaning and restoration. I did a rather crazy thing: I gave up a house, a permanent position, my life in the Netherlands, and moved to Los Angeles! And here I am, six years later!

On moving continents, and different attitudes: No regrets! But it did take a long time to get used to Los Angeles - it’s such a huge city. Everything is about cars and traffic; in the Netherlands I was so used to travelling to work on my bike. There’s a very different attitude here – people are much more laid back, there’s the sunshine, the mountains and the sea. Settling in was a challenge, but now I just love the city and all it has to offer. The hardest thing about living on the west coast of America is being away from family - they’re all in Ireland. That 8-hour time difference makes me feel very far away from home. The sense of humour, too – it’s very different here! I love the Irish sense of humour when I go back. It’s one of the reasons it was so lovely having Maria and Ele [National Gallery of Ireland conservators] out here at the Getty during the Guercino project! 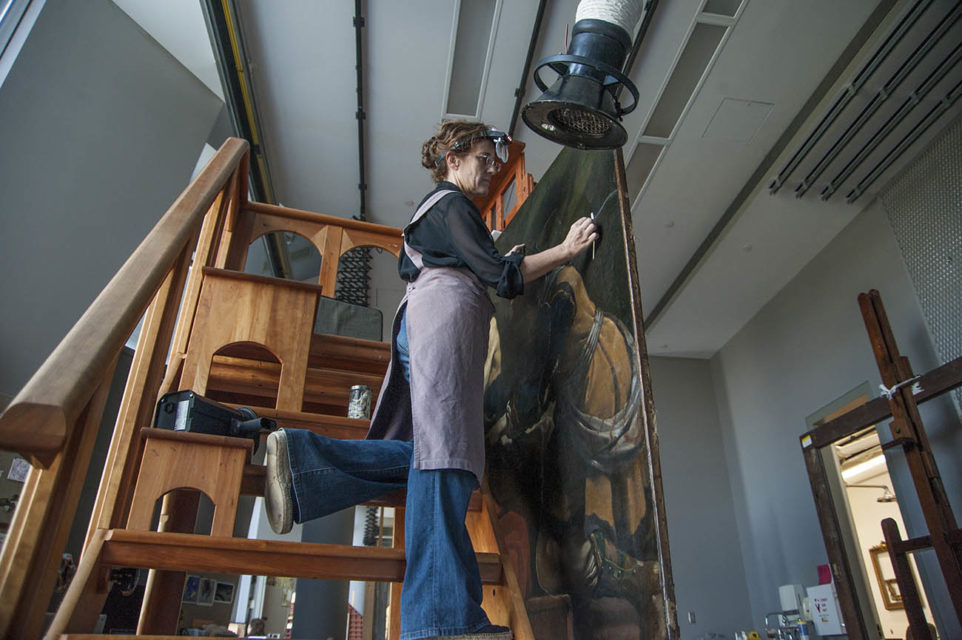 On a typical day in Los Angeles: I’d love to be able to say that I go jogging on the beach, do three hours of yoga before work, eat kale for breakfast, lunch and dinner, but no, that’s not true! I grudgingly wake up, have coffee – outside, which is always lovely – and come in to work around 9am. We can stay in the studio as long as we like, which is great, because there’s no time pressure to get out. Sometimes with conservation work, it’s really difficult to get into a zone or into a state where you think “this is going really well, I do not want to stop”. When those moments come along, you don’t want to let go of them, hence why it’s wonderful  to be able to stay on late. It really varies from day to day, but generally I leave around 7/7.30pm. We have lunch up here on the hill, as the Getty is quite isolated; the gardens here are beautiful, as are the views, so having lunch here (again, outside) is quite special.

On a memorable conservation project: There’s one that really sticks out for me, and that’s a life sized portrait of a woman called Eva Callimachi Cartagi by Henri Fantin-Latour that belongs to the Kröller-Müller Museum – it was the painting that I brought here to the Getty in 2005, and it was a really interesting project in terms of conservation ethics. She was basically missing her face, and it felt bizarre to be coming to LA to do a face lift on a painting! The painting is beautiful, and the figure reminds me of my mother. It was also a luxury to be working solidly only on one painting for three months, a great chance to focus. The first Van Gogh that I worked on was also a big moment for me: I just couldn’t believe that I was actually working on a painting by Vincent van Gogh! The thick paint (impasto) that we associate with this artist made cleaning the surface very challenging.

On the differences between conservation in Ireland and the US: The more I think about it the more I think that conservation is more or less similar all over the world– the ultimate aim is the same at the end of the day. The approach and methods used can differ between conservators, but I get the impression from colleagues I’ve met around the world that people are generally on the same level and, if you’re open to trying new techniques, you can really learn from each other and pick up little tricks and tools. You’re constantly learning and sharing, and if you’re not open to that, then you really narrow the possibilities.

On a dynamic work environment: There are three permanent paintings conservators here at the Getty, as well as our boss, who’s also a paintings conservator. We have a wonderful  frames conservator, a fabulous staff assistant  and a graduate intern. Of course we also have space for guest conservators - it's certainly a dynamic and inspiring work environment! Next door to our space, we have conservation scientists from the Getty Conservation Institute, with whom we work closely. They can provide us with information that can facilitate our understanding of art works, which ultimately gives us a more informed approach to carrying out treatment.

On what Getty conservators have on their studio playlist: We have an open working environment – the studio has a zig-zag shape, with windows on one side. When there are deadlines, it can be tricky to find a quiet space to write up reports, articles and carry out research. Luckily we have a quiet library at the Getty Research Institute as an option. It ranges from being very silent in the studio to blaring U2 and letting it all out. Music-wise, it varies: we have classical music, jazz, music from the 60s, the 70s. We are a close team in the studio and being respectful of each other’s schedules is integral.

On the importance of breaks: Breaks in this profession are important. I’m delighted to have introduced an afternoon tea break! It's actually a really good time to re-group and chat about what’s going on in the studio.

On good advice: One thing that [conservator] Andrew O’Connor once said to me on leaving the National Gallery of Ireland to pursue my training was, “never forget that you’re working on a painting”, and that really stuck with me. It's easy to get caught up in the microscopic details of a painting, and to forget to look at the object you're actually looking at, and ask yourself questions like what its function was, and why it was created.