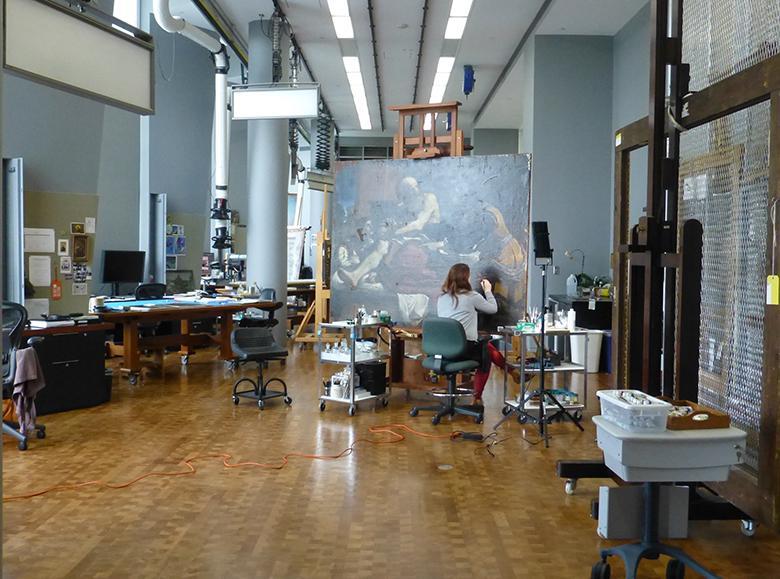 Journey of a conservator: working on our Guercino in the Getty

The National Gallery of Ireland and the J. Paul Getty Museum, Los Angeles carried out a two-year long conservation and research project on Guercino’s Jacob Blessing the Sons of Joseph, one of the masterpieces from our collection.

Painting conservator Maria Canavan travelled to LA to work alongside the Getty conservators on this ambitious project.

Below, Maria shares some of her photos and behind-the-scenes stories from her time in LA.

Above is a typical LA view on my way to work at the J. Paul Getty Center - slightly different from my usual commute in Dublin. Swapping my daily cycle down the banks of the Liffey for the palm tree-lined boulevards of LA was a bit of a culture shock, but a very welcome one! Arriving at the Getty before the public began to file in, and soaking up the sunshine with a morning coffee, was one of the nicest treats of the day. That's my morning coffee spot on the right, with a great view of Martin Puryear's sculpture That Profile (1999). 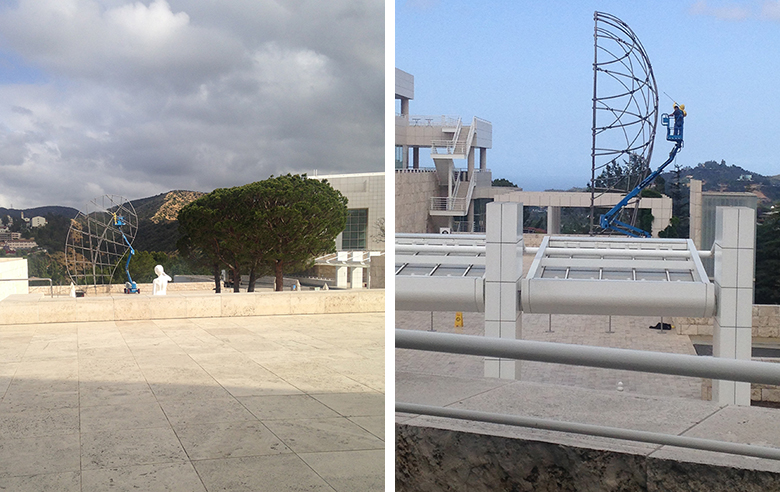 Closed to the public on Mondays, the staff in the Getty take the opportunity to carry out maintenance work on the buildings and artworks. One Monday morning I spotted the outdoor sculpture cleaning team working on Puryear's 45-foot high stainless steel and bronze sculpture. 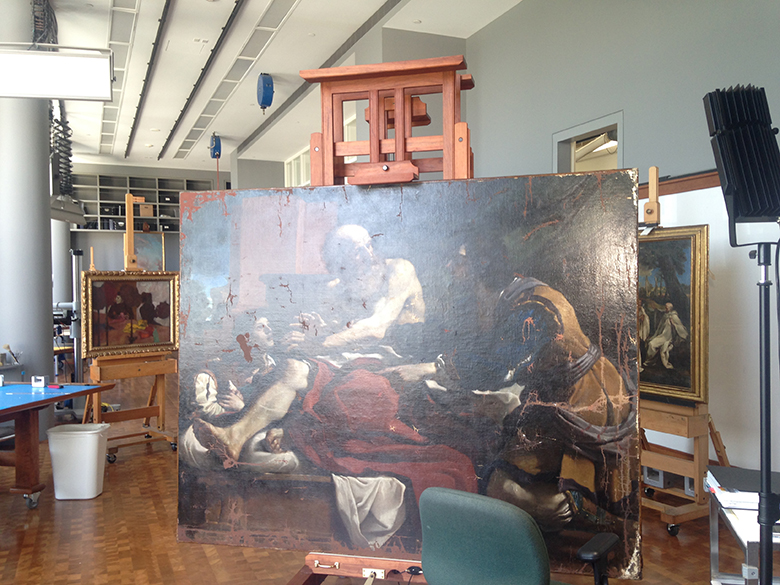 This was my first encounter with Guercino's painting in the Getty conservation studio. Back in Dublin we had been following the progress of the project through photos, phone calls and emails, but there is no comparison to seeing the work in person. When I arrived the cleaning stages of the treatment had been completed and a layer of varnish, known as an isolating layer, had been applied to the entire paint surface to re-establish the saturation of the colours and provide a removable barrier between the original material and the new fillings and retouchings. The next stage of treatment had only just begun. It involved filling old and historic paint losses to match the levels of the surrounding original paint. The areas showing a brown-ish red matte finish here indicate the first pass of filling in the paint losses. 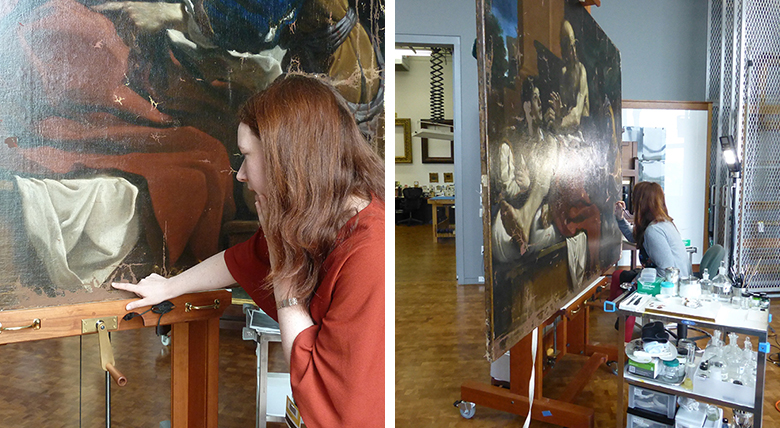 Here I am discussing the levels of filling with Devi Ormond who is the Getty’s painting conservator and project lead. The plan for my visit was to work with Devi on the painting and I found our discussions really enriching. She had discovered so much information about Guercino's techniques and the condition of the painting while cleaning it, and it was fantastic to be able to absorb her insights. I also got to spend some time working on the painting and the hours just flew by. I became so engrossed in the rich tones and Guercino's brushstrokes - this part of my job is enormously satisfying. 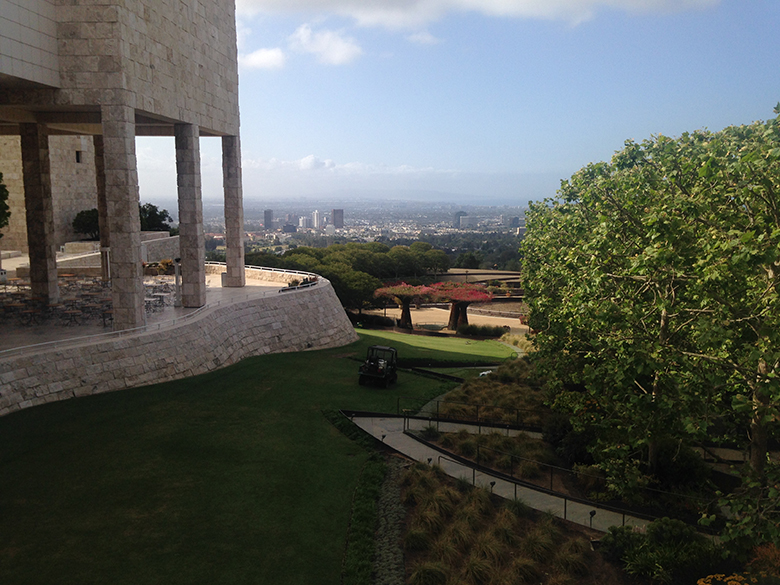 During breaks I would take in the amazing views, like this one from the balcony outside the Getty conservation studio. In the distance, the skyscrapers of downtown LA were the only reminder that I was in a massive and bustling city. The opulent travertine buildings, designed by Richard Meier, and the luscious gardens make you feel as if you have been transported to some advanced alien civilisation. Probably one of the reasons why the Getty Center was used as the location for Starfleet HQ in the Star Trek movies - just a little geek-fact there! 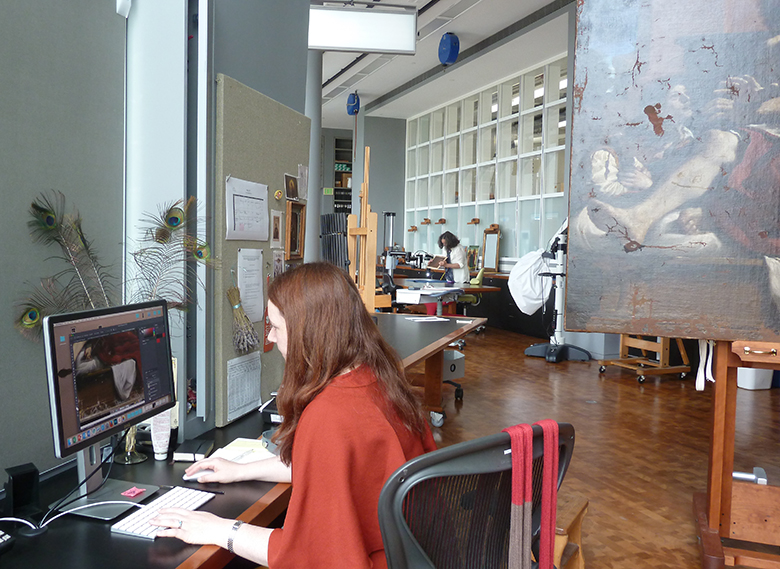 Back inside the studio, I was able to view technical images of the painting to inform the reintegration of old paint losses. In some areas the paint loss had obscured some detail that was integral to the legibility of the painting. It was very helpful to refer to the x-ray images, and to images of Guercino's studies on paper, to establish how best to reconstruct those details.

As if working in the Getty wasn’t enough of a treat, I put aside my last weekend in LA to indulge in some bucket-list tourism. Here is the view from my handlebars while I was cycling the Pacific Coast bikeway, a beautiful coastal cycle track that runs all the way from Santa Monica to Redondo beach. I also wandered around the kitsch canals of Venice Beach where I almost believed I was somewhere in Italy…until a flamingo pedal boat passed by! 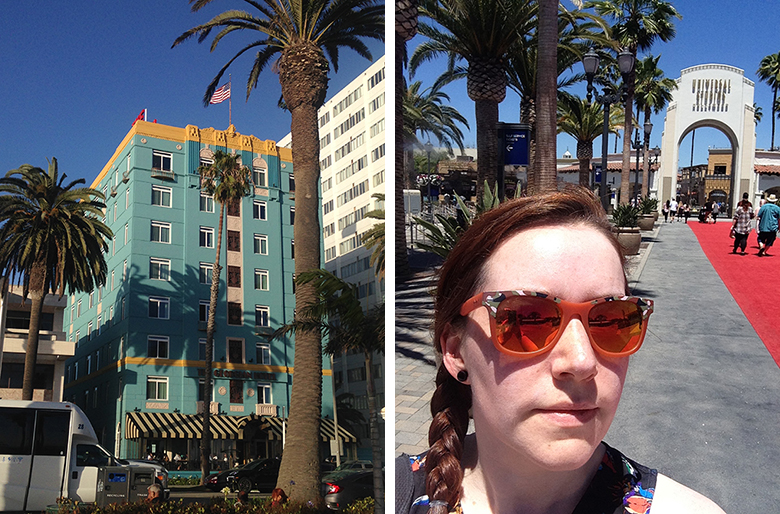 A lazy evening stroll along the seafront in Santa Monica would inevitably lead to postcard views and funky beach-front architecture. And, of course, I couldn’t resist spending a day off at Universal Studios, overgrown child that I am. My favourite was the Jurassic Park ride!

You can visit Guercino's painting in Room 41 in the Milltown Wing of the Gallery.