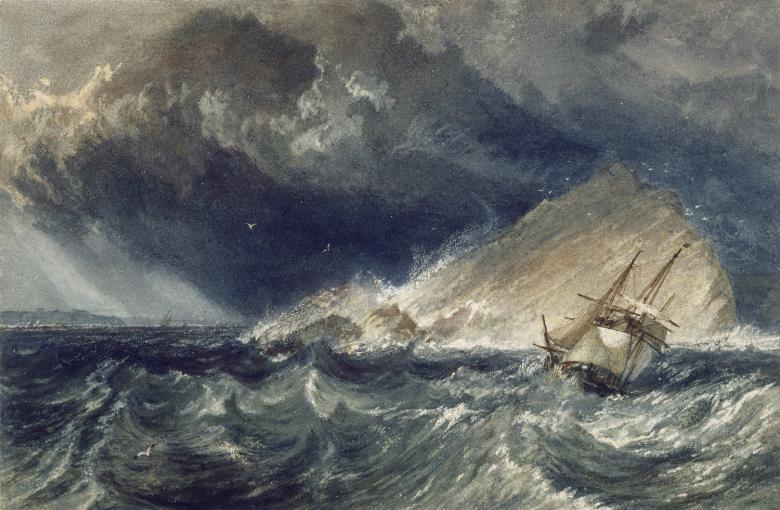 Joseph Mallord William Turner (1775-1851), 'A Ship against the Mewstone, at the Entrance to Plymouth Sound', c.1814. © National Gallery of Ireland.Credit

A Ship against the Mewstone, at the Entrance to Plymouth Sound by J.M.W. Turner

In 1811 the engraver and publisher William Cooke approached Turner with a proposal to publish a print series entitled Picturesque Views of the Southern Coast of England. This watercolour, in which the waves are so accurately depicted, their frothy white crests being blown away by the strong wind, appeared in part six of the series published in 1815. The rigging of the ship labouring in the heavy swell, the clouds highlighted by a bright shaft of sunlight, even the gannets with their characteristic black wing tips are recorded in great detail. The ship, probably a Royal Naval vessel, is dwarfed by the dreaded Mewstone. This dramatic natural feature, which lies at the eastern end of Plymouth Sound off Wembury Bay, notoriously claimed many lives over the centuries. During the summer of 1813 Turner spent time travelling along the coast, filling sketchbooks with his observations.