Board of Governors and Guardians 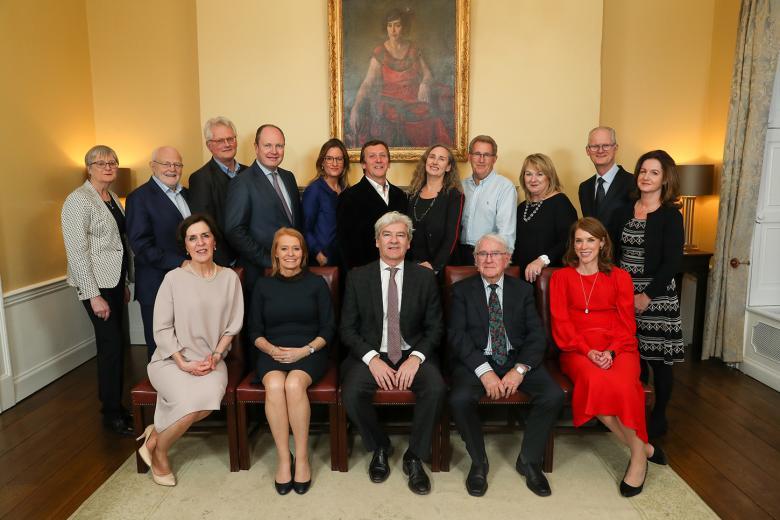 The Board comprises up to seventeen members, of which ten are appointed by the Minister for Tourism, Culture, Arts, Gaeltacht, Sport and Media, five are ex-officio holders of the offices listed below, and two are nominated and appointed by the Royal Hibernian Academy pursuant to a power bestowed on them in the 1854 Act. Members appointed by the Minister serve terms of five years. Ex-officio members serve terms of varying duration depending on the constitution of their organisation. Read more information on terms and appointment dates.

Dan Flinter | Chairman of the boards of PM Group Holdings, The Irish Times and VCIM Venture Capital. A non-executive director of Aryzta AG and Dairygold Co-Operative. Former CEO of Enterprise Ireland, and a former executive director of IDA Ireland. MA in Economics from UCD, and is an Eisenhower Fellow.

Jacqueline Hall | Principal of Partners in Communication, a consultancy specialising in Corporate Communications, Public and Regulatory Affairs. Senior Adviser with KREAB International.  Over 30 years’ experience with Irish and multinational organisations across a range of sectors. President of the Public Relations Institute of Ireland (2014-2016). Former Board Member of Irish Water, Ervia, Fighting Blindness and Rehab Foundation. B.A. in History of Art and History (U.C.D), a Graduateship in Marketing (M.I.I), a Graduate Diploma in Corporate Governance (Michael Smurfit School of Business) and an Advanced Diploma in Data Protection from the Honorable Society of King’s Inns, Dublin .

Gary Jermyn | Fellow of the Chartered Accountants in Ireland, poet and performer.

Mary Keane (Chairperson) | Deputy Director General and Director of Policy & Public Affairs with the Law Society of Ireland. Director of Irish Rule of Law International, a registered charity that promotes the rule of law in developing countries. Qualified Barrister-at-Law.

Abigail O'Brien | President of the RHA, Contemporary Artist. O’Brien’s work employs many media including photography, sculpture, video, sound and hand-made embroidered objects and explores themes such as ritual, rites of passage and the domestic realm. Currently working on The Cardinal Virtues, Fortitude, Temperance, Prudence and Justice. Featured in private and public collections including, The Irish Museum of Modern Art, Dublin, The Caldic Collection, Rotterdam, The Museum of Modern Art, Vienna, The Gemeentmuseum, The Netherlands and Centro National des Artes, Mexico. MA Fine Art Painting from The National College of Art and Design, Dublin (1998); born in 1957. President of the Royal Hibernian Academy in Dublin, the first female president of the RHA in almost 200 years. Secretary of the RHA from 2012 until 2017, the first female artist to hold this position. O'Brien's work has been supported by the Arts Council of Ireland and Culture Ireland. Lives and works in Ireland.

Barney Whelan | Former Director of Communications, Corporate Affairs, Brand Development and Marketing at An Post, former Public Relations Manager at ESB, with responsibility for public relations, public affairs and brand communications. Former Director of Sales and Marketing at The Food Safety Promotion Board. Former board member of the National Concert Hall. Chair of the Cork International Film Festival. Previous experience in the aquaculture industry. Doctorate in Fish Pollution Ecology, MBA on the economic impact of “environmentalism” and Diploma in Fish Pathology (Stirling University). Extensive experience in fundraising/PR, marketing, corporate governance and business management.