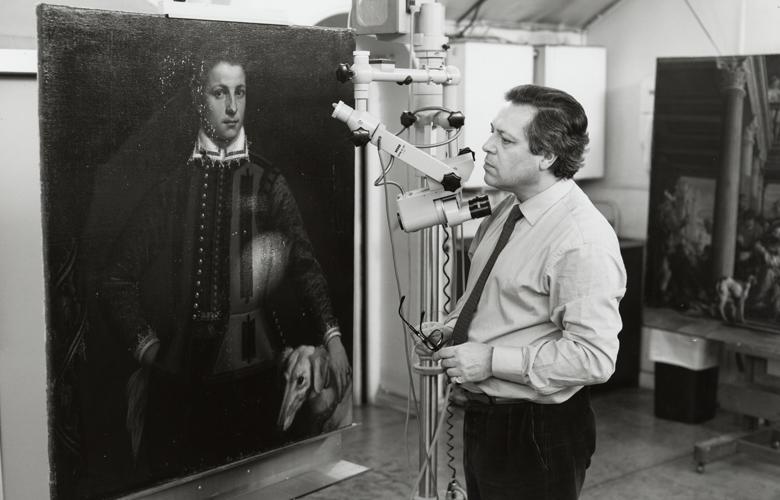 Sergio Benedetti at work in the Conservation Studio in the National Gallery of Ireland.Credit

The Board, Director and staff of the National Gallery of Ireland are deeply saddened to learn of the death of Sergio Benedetti (1943-2018), former conservator and Head Curator. Sergio is remembered as an esteemed colleague and scholar whose career in the Gallery spanned thirty years. A native of Florence, Sergio studied in Florence and Rome, specialising in the conservation of seventeenth-century Italian painting. Joining the Gallery in 1977, one of the first professional conservators to be hired, he researched and treated numerous significant works in the collection including Murillo’s The Meeting of Jacob and Rachel (c.1660-65).

Among Sergio’s many valuable contributions to the Gallery was his involvement in the return of Canova's Amorino to Ireland. Originally commissioned by John David La Touche, son of the first Governor of the Bank of Ireland, the sculpture was lost for over a century before being discovered in the UK in the mid-1990s. The sculpture was acquired by Bank of Ireland who donated it to the Gallery as a gift to the nation in 1998. Following its acquisition, restoration was carried out in the Gallery.

However, Sergio’s most significant legacy is his role in the discovery of Caravaggio’s The Taking of Christ (1602). The painting, which depicts Christ’s arrest in the Garden of Gethsemane, was presumed lost, known only through copies and from descriptions by Caravaggio’s biographers. Sergio’s fortuitous discovery was made on a routine visit to inspect some paintings in one of the houses of the Jesuit Fathers on Leeson Street, Dublin in August 1990. With his keen eye and expert knowledge of seventeenth-century Italian art, Sergio recognised the subject and composition as that of the ‘lost’ Caravaggio painting, and he suspected, given the painting’s quality, that it could in fact be the original.

Three years of meticulous research, analysis and consultation with international experts followed, as Sergio worked to authenticate and conserve the masterpiece. In 1992 he curated the exhibition Caravaggio and his Followers at the National Gallery of Ireland, a landmark exhibition that included Caravaggio’s The Supper at Emmaus, on loan from the National Gallery, London. Finally, on 16 November 1993, the Gallery unveiled one of the greatest art discoveries of the twentieth century; The Taking of Christ went on public display in the exhibition Caravaggio: the Master Revealed. In the accompanying catalogue, Sergio wrote: ‘That morning in August, 1990, leaving the House of the Jesuit Fathers in Leeson Street, excited by what I thought I had just seen, I could hardly have imagined that just three years later, I would see my beliefs realised with an exhibition’. The Jesuit Community generously offered the painting on indefinite loan to the Gallery where it remains one of the most significant masterpieces on display.

Sergio is remembered as an indefatigable researcher, art historian and conservator who published widely, including the catalogue for Caravaggio: The Master Revealed; curated significant exhibitions such as A scholar's eye: paintings from the Sir Denis Mahon collection; and cared for the collection of the National Gallery of Ireland.