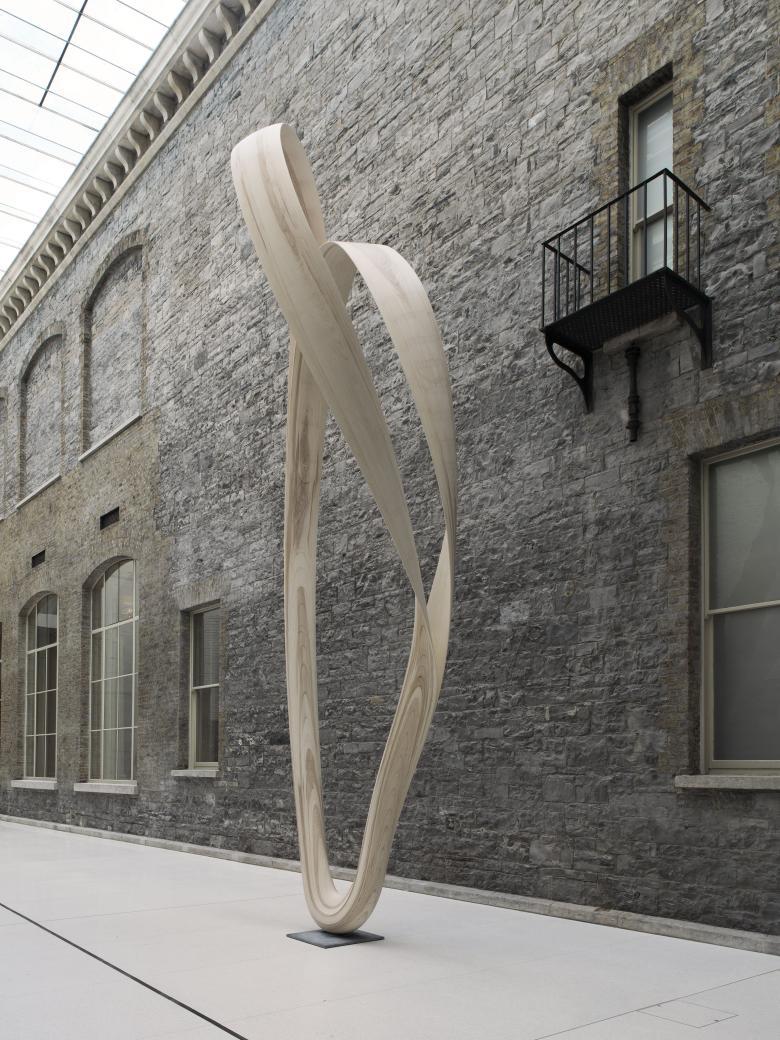 The National Gallery of Ireland presents

Resting upon a small Kilkenny limestone base, Magnus Modus delineates space in its slender aspect, stationed on a tiny footprint, reaching upwards and then outwards. As the sculpture ascends, it becomes lighter and reacts to subtle changes in atmosphere.  It creates surrounding spaces, shadows and delicate lines of movement, thereby transforming the viewer into an actor by its responsive presence.

“Magnus Modus is the culmination of all the pieces created during the past 15 years and the inspiration that went into designing them. This commission by the Office of Public Works on behalf of the National Gallery of Ireland gave me the opportunity to explore ideas around pure sculpture and translate them into a full scale piece. I wanted to create a sculpture that is very seductive in form and yet perfectly imperfect, as in nature where the supposed imperfections are the thing that create the unique character, the results of atmospheric shifts that ultimately alter and positively influence the material. Magnus Modus is the very reflection of my search for effortless design harmony.”

“A spectacular gain of the Gallery’s refurbishment project has been our new Courtyard. Into this new space Joseph Walsh has placed an extraordinary looping sculpture. It is stunningly engineered and acts as a focal point around which visitors will circulate. Magnus Modus will be available to view by our visitors from Thursday June 15th when the National Gallery of Ireland reopens its historic wings on Merrion Square in Dublin.”

Per Cent for Art Scheme

Magnus Modus by Joseph Walsh was commissioned by the Office of Public Works (OPW) on behalf of the National Gallery of Ireland under the Per Cent for Art Scheme, as a result of winning an OPW-initiated by invitation competition.

New Courtyard in the National Gallery of Ireland

Created by architects Heneghan Peng as part of the refurbishment project of the historic wings of the National Gallery of Ireland, the Courtyard is a light-filled public orientation space that sits between the 1864 Dargan wing and 1903 Milltown wing on Merrion Square.

Joseph Walsh founded his Studio and workshop in 1999 on his family’s farm in County Cork, an 18th-century agricultural concern on which the original Walsh farmhouse still stands.

Joseph Walsh is a designer maker, realising one-of-a-kind and limited edition pieces. Walsh’s innate relationship with landscape and rural life dictated by the seasons continues to inform Walsh’s response to nature, to his consideration of the effect of the environment on materials which fires his imagination, inspiring his unique creations. Largely inspired by and appreciative of nature, his work is characterised by an ongoing curiosity about the dialogic possibilities of different materials and unison of form and functionality to create sculptural, one-of-a-kind pieces.

Walsh’s creative approach reflects his appreciation of nature and also his desire to engage the user with visual and tactile forms. The great understanding and sympathetic use of the material, the intimate relationship between the process of finding forms and creating structures, and the continuity and resolve from the concept stage to the making process define his Studio and work today.

Walsh's workshop, employing an international team, engages in resolving technical challenges as his work becomes more complex. They explore new materials while continuing to further the possibilities of engaging with wood. The work of the Studio continues to advance skills, inspire an innovative response and challenge existing practices in achieving the ambitious pieces realised.

Joseph Walsh was awarded an Honorary Doctorate by University College Cork in 2015 in recognition of his contribution to design. His work can be found in many significant international Museums and Private Collections and is regularly exhibited at major art and design fairs.

About the National Gallery of Ireland

Established in 1854 by an Act of Parliament, the National Gallery of Ireland is one of Europe’s earliest public art galleries. It houses a collection of over 16,300 works of art spanning the history of Western European art from early Renaissance to the present day. Among the highlights are Spanish works by Velázquez, Murillo and Goya, Italian masterpieces by Mantegna, Titian, Caravaggio and Guercino, French paintings by Poussin, Chardin and Bonnard, Dutch masterpieces by Rembrandt, Vermeer and Van Gogh, and works by eminent British artists including Hogarth, Gainsborough and Reynolds. The Gallery’s most prominent holdings relate to the Irish collection with works by Daniel Maclise, Thomas Roberts, Roderic O’Conor, John Lavery, William Orpen, Mainie Jellett, Paul Henry and Jack B. Yeats. The Gallery is also home to the National Portrait Collection and extensive research collections such as the Denis Mahon Library & Archive, the Yeats Archive, the William Orpen Archive and the Centre for the Study of Irish Art.