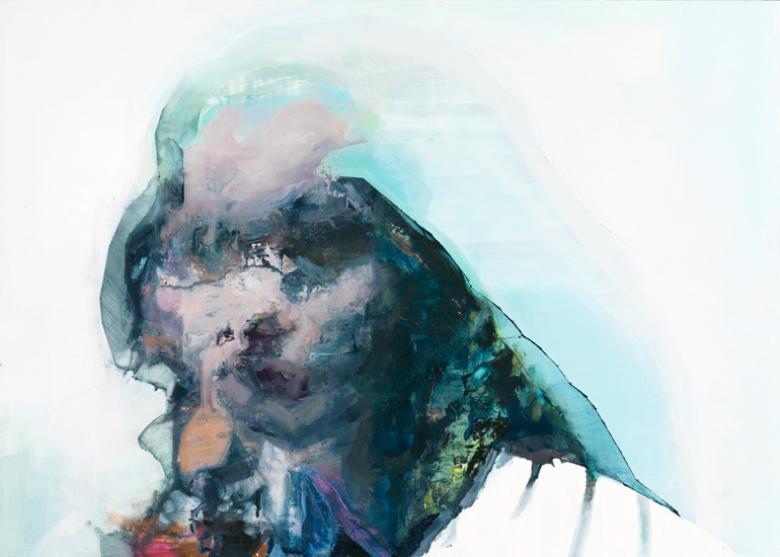 "This work is part of a series of semi-abstract heads I have been working on for a number of years. Tronie is a Dutch art historical term (literally meaning 'head', 'face' or 'countenance') for certain types of head paintings from the Flemish Baroque and Dutch Golden Age. Tronies were not intended as portraits. Rather, they were
meant as studies of expression, type, physiognomy, or any kind of interesting character. Like portraits, tronies were made from living models, but they did not focus on the portrayal of a particular person complete with indicative props and context. Instead, they freely explored the spectrum of human appearance and emotional expression. It is in reinterpreting the term in my own practice that a new approach to subject has developed. The first of these tronies was exhibited in the Hennessy Portrait Awards 2014 in the National Gallery. In May 2015 this body of work was the subject of a talk I delivered, also in the National Gallery, entitled ‘Defamiliarization: Portraits and Tronies’, as part of the Sean Scully Lecture Series on Contemporary Art. The first solo exhibition of this series will take place in November 2017 in
the Molesworth Gallery in Dublin."

Cian McLoughlin (b.1977) is a Dublin-based artist. A graduate of architecture, he went on to complete a Masters in Film Studies in UCD before dedicating himself full time to painting. His work is largely focused on portraiture and urban landscapes. He has had four solo shows in Dublin, and one more recently at the J. Cacciola Gallery in New York. He has featured in many group exhibitions, notably at the National Portrait Gallery in London, the National Gallery of Ireland, the RUA, Art Miami, Art Toronto, King’s Palace London and the RHA Annual Exhibition, where he won the Niccolo D'Ardia Caracciolo RHA Gold Medal in 2013 and showed as an invited artist in 2016.