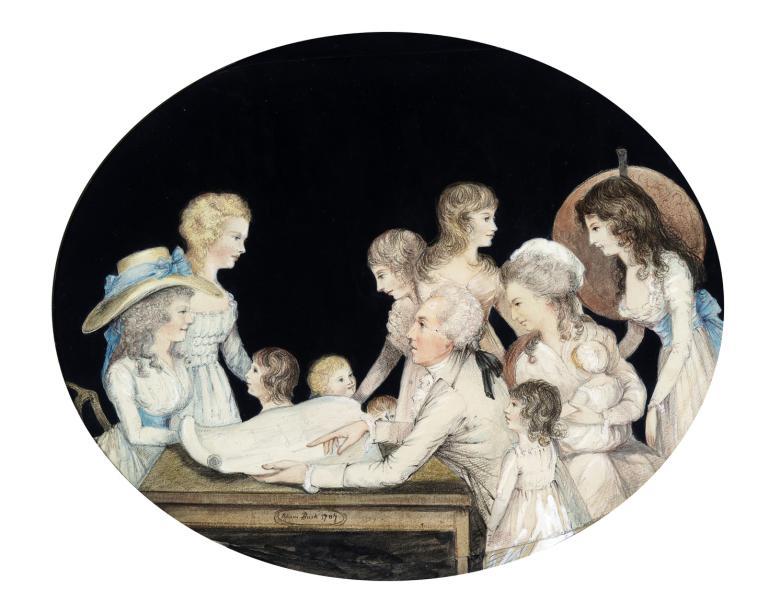 We've asked the Gallery's curators to select some of their favourite works from the collection. Here, Anne Hodge, Curator of Prints and Drawings, shares an insight into a fascinating work on paper:

"At a time when many families are homeschooling their children, I thought it might be interesting to see how an eighteenth-century miniature painter depicted a famous Irish family at work together.

At the centre of the composition is Richard Lovell Edgeworth (1744-1817) an engineer and inventor from Edgeworthstown, Co. Longford. He faces his eldest daughter, the famous novelist Maria (1767-1849), as he points to a drawing on the table. Richard's third wife, Elizabeth Sneyd (standing holding a baby), and numerous other children look on.

In 1798, Maria and her father published a two volume treatise, 'Practical Education', which became an acclaimed manual for child-rearing. Key ideas included encouraging hands-on learning and experiment. Above all, children were to be encouraged to 'learn from their own experience a just confidence in their own powers.'

Other successful Edgeworth siblings included William, a civil engineer who built some of the first roads in the west of Ireland; the influential economist Francis Ysido; and botanist and pioneer of photography Michael Packenham Edgeworth."