A celebration of creativity!

Discover twenty creative and original portraits shortlisted for this year's Zurich Young Portrait Prize! Our annual inclusive art competition aims to foster and support creativity, originality and self-expression in children and young people. The Zurich Young Portrait Prize accepts entries from young people, up to the age of 18, of all abilities, from across the island of Ireland. This free exhibition showcases twenty finalists in four categories (ages 6 and under, ages 7–11, ages 12–15 and ages 16–18) chosen by our panel of judges.

Five winners – one in each age category and one overall – were revealed in a special online event on Tuesday 30 November. The overall winner was awarded a personalised wooden box of high-quality art materials, specific to their choice of material in their portrait, and a cash prize of €500. We recorded the event, so you can watch a video of the awards ceremony. You can also scroll down this page to see the winning portraits and all the finalists.

The exhibition will travel to Crawford Art Gallery, Cork, where it will be displayed between 23 April and 17 July 2022.

Very special thanks to the hundreds of talented children and young people across Ireland who entered the competition. You inspire us!

We are now accepting entries for the Zurich Young Portrait Prize 2022. Find out how to enter the competition this year. 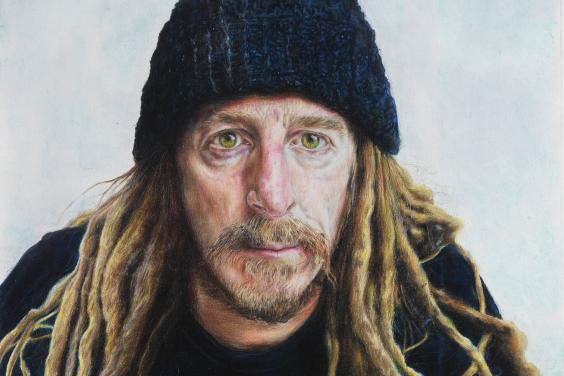 Painting in a different world now (My Father The Artist), 2021

Find out more about the overall winner

Winners in each age category:

In this short video, the artists talk about what inspired their winning portraits, and offer some advice to young people who are thinking about entering the competition next year.

We are delighted to have Aideen Barry, Joe Caslin, and Tadhg Crowley on board as the judges of this year's Zurich Young Portrait Prize.

Aideen Barry (ARHA) is a practising visual artist based in Ireland, but with an international profile. Barry is a member of Aosdána, and lectures in several universities and schools of visual art in Ireland, the United States, and around the world. Selected projects include exhibitions at The American Film Makers' Co-op NYC (US), NYU, The Katzen Centre (US), Elephant West (UK), Mother's Tankstation (IE), Irish Museum of Modern Art, Oaxaca (MX), Louise T. Blouin (London), Wexner Center (US), Moderne Mussett (SE), Liste Art Fair (CH), BAC Geneva (CH), Loop Biennale (ES), and Matucana 100 (CL). She is currently making a feature film "Klostés" commissioned by Kaunas 2022, and is working on a multidisciplinary collaborative work "ᖃᐅᔨᒪᔭᐅᔪᓐᓃᖅᑐᑦ /OBLIVION/SEACHMALLTACHT" for the Irish Traditional Music Archive, Music Network and the Bunting Archives. Recent awards and honours include the Anderson Lectureship at Penn State University, The Myron Marty Fellowship at Drake (Iowa), Project Awards from the Arts Council of Ireland, Modern Ireland in 100 Artworks. In 2010, she was shortlisted for the prestigious AIB Prize, and in 2021 she won the Golden Fleece Award and the Thomas Dammann Junior Memorial Prize.

Joe Caslin is an Irish street artist, art teacher and activist, best known for his beautifully rendered pencil drawings, which manifest as towering pieces of street art. His highly accessible work engages directly with the social issues of modern Ireland, on an unavoidable scale. Caslin confronts the subjects of suicide, drug addiction, economic marginalisation, marriage equality, stigma in mental health, direct provision, institutional power, consent and, most recently, the effects of the Covid-19 pandemic on young people. The monochrome drawings Caslin creates live with us and against many of us for some time before washing away. They hold a mirror up to the kind of society that we are, whilst asking us individually what kind of society we want to be a part of.

Tadhg Crowley is the Senior Curator – Education + Community at the Glucksman in University College Cork. The Glucksman presents a wide-ranging programme of temporary exhibitions accompanied by an extensive education programme to engage visitors of diverse interests and backgrounds. A graduate of Limerick School of Art and Design, Tadhg’s role at the Glucksman is to help foster an appreciation of the visual arts among the wider public. Tadhg has recently curated projects with communities of interest and communities of place including Making Waves (2017), Future Forms (2019), and Tales of a City (2020). Tadhg has coordinated the Glucksman’s Creative Agency programme with young asylum seekers since 2015. These engagements at the museum have been realised through a variety of projects including Our Place (2016), Change the Beat (2019), and My Generation (2020). He has curated exhibitions at the museum including Viewpoints (2019), Moving Spaces (2019), and New Light (2020).