The Gallery was established by an Act of Parliament in August 1854 (the ‘Act’). Since then, there have been a number of subsequent amending Acts providing for the administration of the institution. Under its statutes, oversight of the affairs of the Gallery is entrusted to a Board of Governors and Guardians (the ‘Board’). The Gallery’s Byelaws provide for a post of a Director, who is appointed by the Board, and is responsible for day-to-day control and management of the institution. The most recent legislation concerning the Gallery is the National Cultural Institutions Act, 1997. An autonomous national cultural institution, the Gallery operates under the aegis of the Department of Tourism, Culture, Arts, Gaeltacht, Sport and Media.

As set out in Section 60 - National Cultural Institutions Act, 1997: 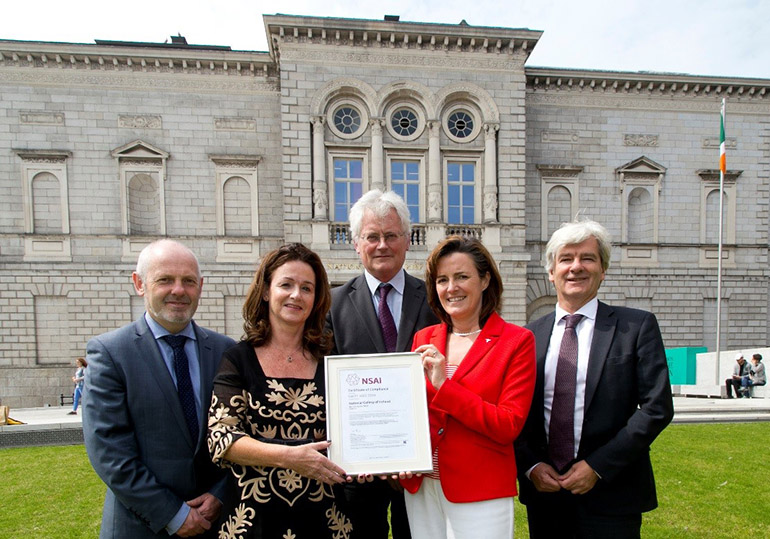 We aim to maintain best standards in corporate governance. In 2017, the Gallery obtained accreditation from the National Standards Authority of Ireland (NSAI) under SWiFT 3000:2010 – Certificate of Compliance with the Code of Practice for Corporate Governance in Ireland. This significant achievement results in us being the first cultural institution in Ireland to gain such certification, and was the first such certification granted under the Code of Practice for the Governance of State Bodies (2016). The Gallery continues to maintain this accreditation.

The National Gallery of Ireland has been accredited under the Museum Standards Programme for Ireland since 2007. In 2018, the latest maintenance assessment took place, the focus of which was on the significant development and improvements of the Gallery since 2011 under Phases 1 – 3 of its Master Development Plan.

In 2022, the National Gallery of Ireland has been awarded the Triple Lock Standard from the Charities Institute of Ireland (CII). This standard recognises over 80 charities who have achieved excellence in governance, financial reporting, transparency and ethical fundraising. We are delighted to be the first National Cultural Institution to receive this accreditation. To achieve this standard we:

This standard provides assurance to our donors, stakeholders and the general public of the our commitment to excellence.

The Regulation of Lobbying Act 2015 (the Act) came into effect on 1 September 2015 and provides that the Standards in Public Office Commission will establish and maintain an online Register of Lobbying Activity.

The purpose of the Register is to make information available to the public on the identity of those communicating with designated public officials on specific policy, legislative matters or prospective decisions. Lobbyists must report on their interactions with the Designated Public Officials.

Section 6(4) of the Act requires each public body to publish a list of designated public officials of the body.

The sole Designated Public Official of the Gallery under the Act is the Gallery’s Director, Dr. Caroline Campbell.