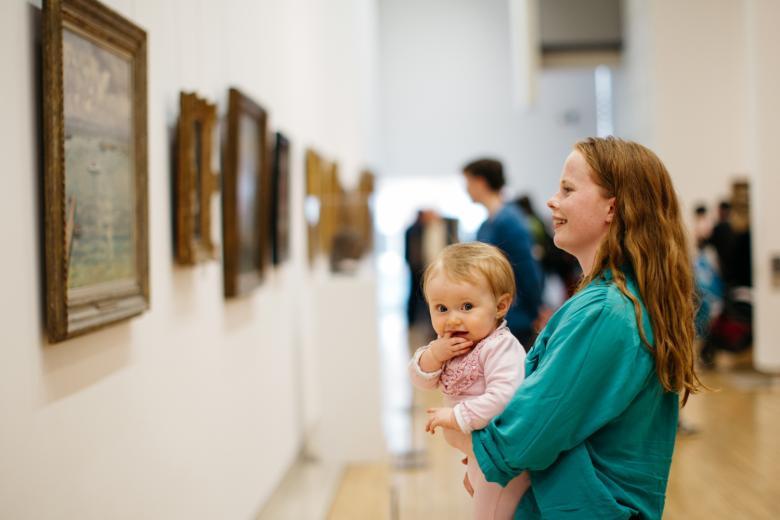 Through a Lens tour: Babies & Toddlers

Whether you're in the Gallery or at home, we realise that you might not have a lot of time to be looking at your phone while wrangling a baby and/or toddler(s), so we will keep this brief!

These are some suggested artworks that you can look at with small children, and enjoy together. We encourage you to chat with your child, even if they can’t answer back just yet, and talk about what you see. The questions in each entry are designed to be asked aloud.

We have also suggested some other things you can seek out in the Gallery (when we re-open), as well as giving you ideas for some fun activities to try out at home.

P.S. If you're looking for some gift inspiration, our Gallery Shop has a great selection of books and art-themed gifts for children here. All purchases support the work of the Gallery. 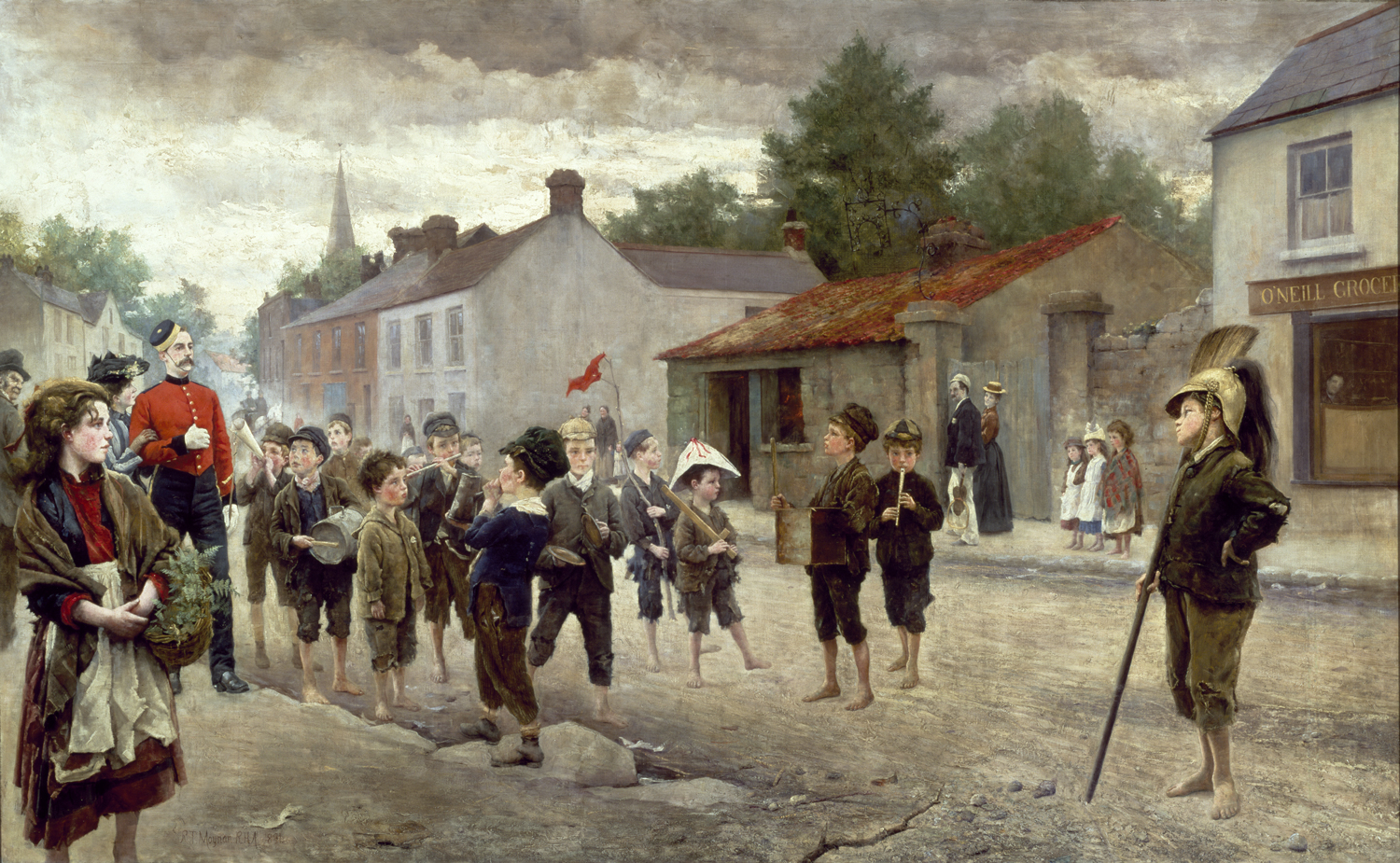 Babies and toddlers love to see other children in artworks, especially one as big as this! Here we see a soldier and a young lady (on the left of the painting) being followed by a group of children. What are the children doing?

The children are pretending to be in a band. They are using some real instruments and some that they have created with everyday things. What are they using to make music? What do you think it would sound like? Can you make the sounds?

Who is in charge of this band? The boy with the helmet looks like he is in charge. How can you tell? Where do you think he got the helmet?

For babies, the first thing they focus on is the face of their primary caregiver (usually their mother or father). When their vision improves, they begin to recognise other faces, too. They learn to recognise themselves, and other children. Your baby might react to seeing other children in this picture, and your toddler will enjoy seeing the kids in their old-fashioned clothes.

At home: use pots, pans, wooden spoons and other kitchen items to make musical instruments, and experiment with sounds.

In the Gallery: find a painting with a baby in it (we have plenty of cherubs in other rooms!) and see if your baby reacts. 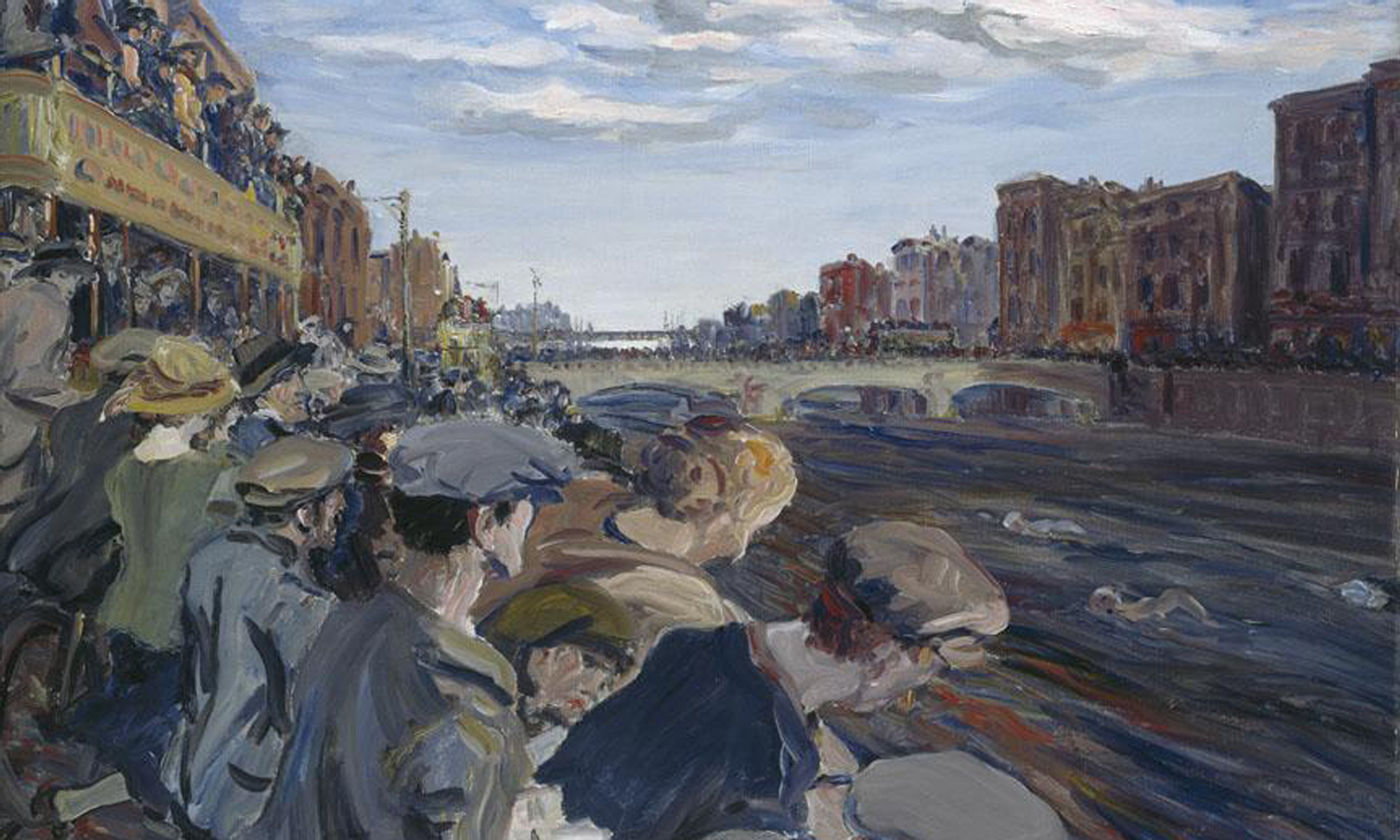 This is Dublin’s Liffey Swim, which is a swimming race in the River Liffey. It has happened every year for more than 100 years. Would you like to swim in the Liffey? What makes you say that? Do you think that there might be fish swimming beside you? What would the water feel like? What would it smell like, do you think?

Sometimes artists put themselves in their own paintings. We think that Jack B. Yeats is the man in the brown hat who is looking back at us. Beside him, the lady in the fancy yellow hat is probably his wife, Cottie. They came to see the Liffey Swim as part of a nice afternoon out. What do you like to do on a day out?

At home: can you see all of the colours Yeats used to paint the river? Why not try to make your own painting using bright colours like this? 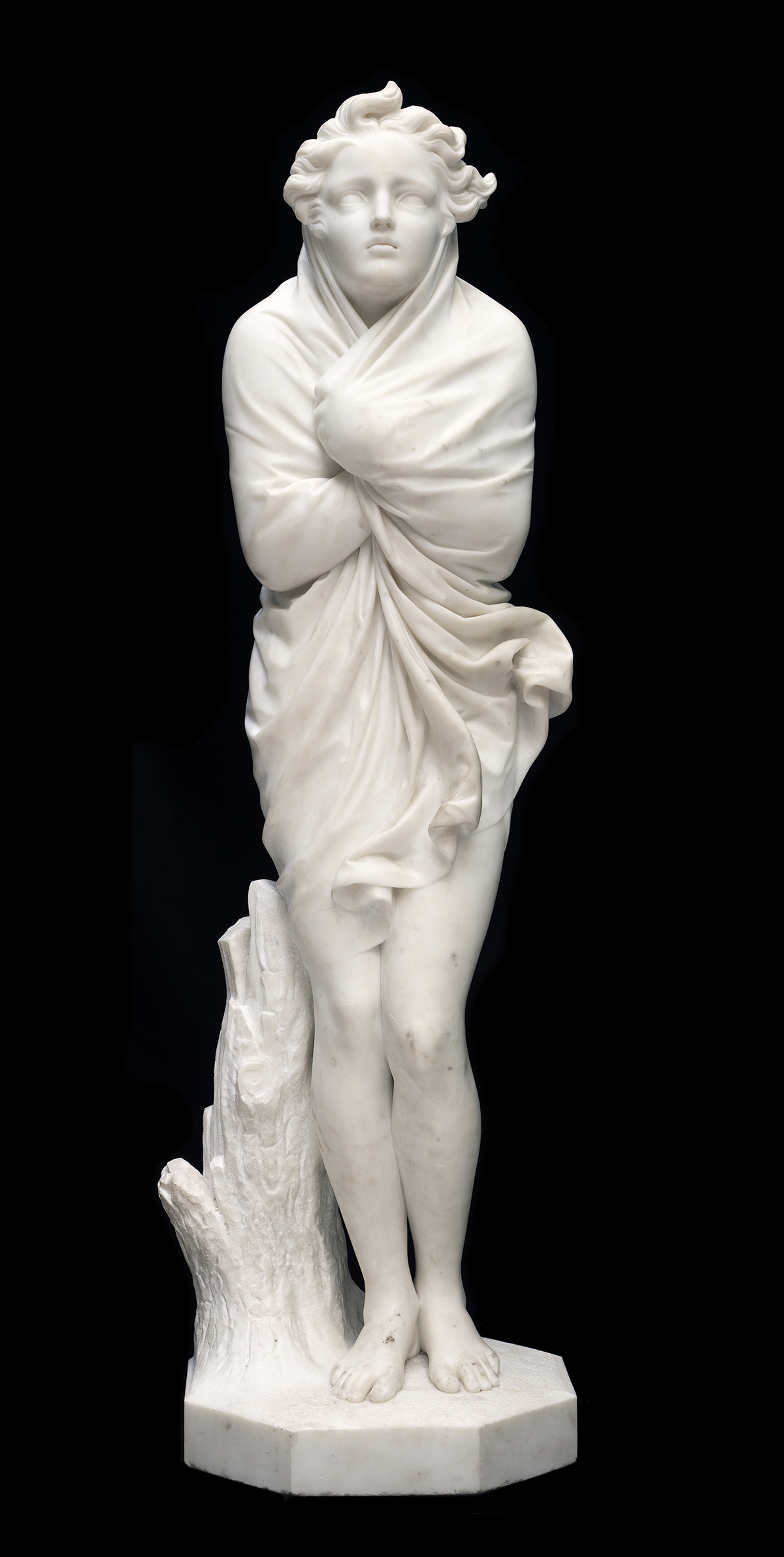 If you're in the Gallery, this is a tough one, because you probably really, really want to touch it but you are not allowed - we're sorry! That is because we are in a gallery, and galleries and museums have to keep things safe for everyone to enjoy.

Look as closely as you can. Can you imagine how it would feel to touch?

This sculpture is made of marble. It is a type of very hard rock, and the artist would have used a hammer and chisel to cut pieces of it off until he had made this shape. Then he smoothed it all out. This was a very difficult job. He had to be careful not to break off too much by mistake.

At home: create a sensory box of different textured fabrics and items. This could include a patch of artificial grass, some carpet, velvet, a light scarf. Let your child explore the different sensations.

In the Gallery: find some other sculptures in the Gallery, or perhaps in your local area. They are not all of people! Imagine what they might feel like as you look at them. Would they be warm? Cold? Smooth? Rough? Are they also made of marble, or something else? 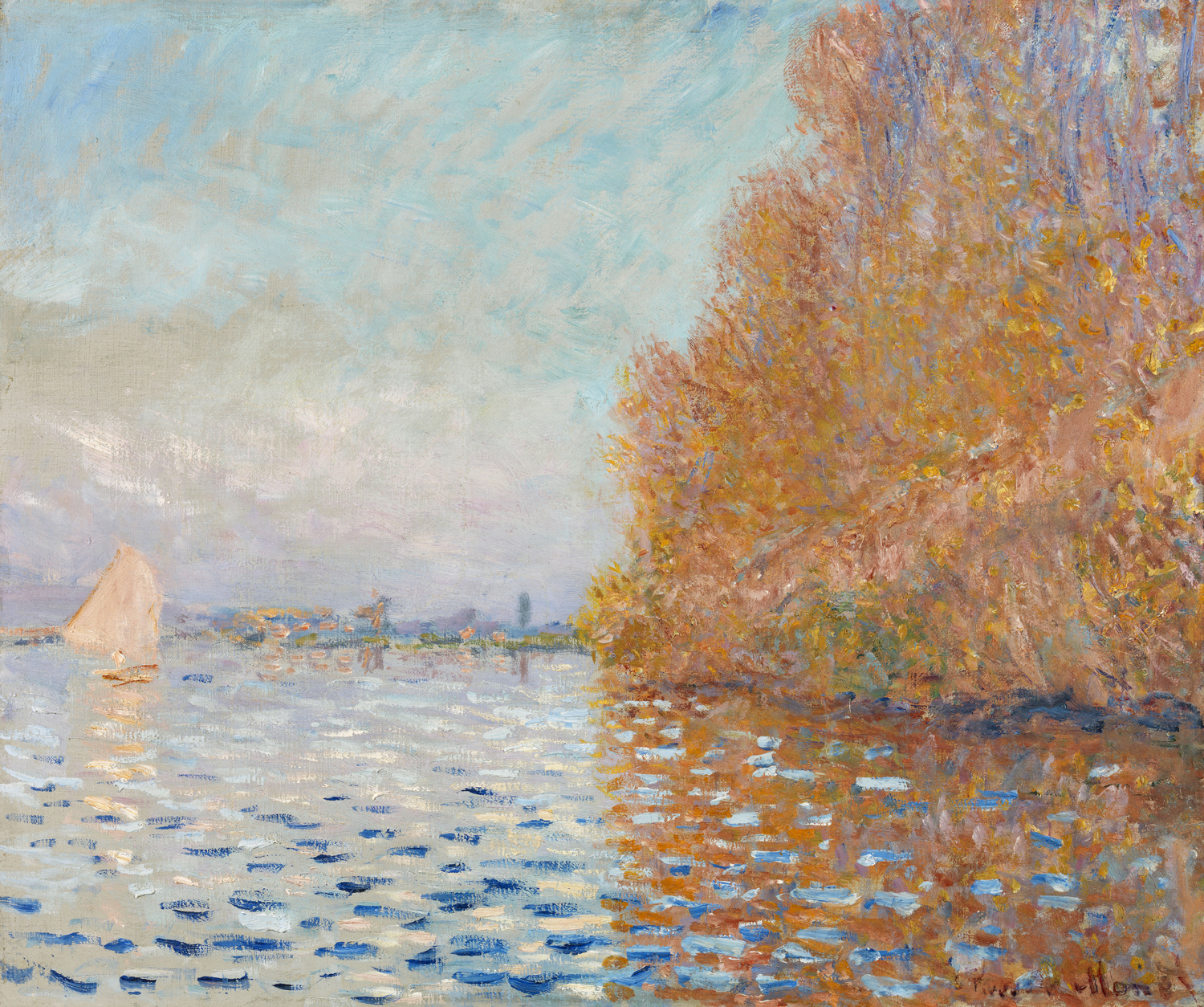 How do you think the artist, Claude Monet, painted this? Where was he standing? He actually painted it from a boat! Monet and other artists in his group, who were called the Impressionists, liked to paint outside, so that they could really see how the light from the sun looked when it shone on things like trees and water. Do you think that painting outside would be fun?

At home: create your own Monet using chalk and collage by following this step by step video.

In the Gallery: babies can see high-contrast colours before their eyes develop to allow them to distinguish more muted colours. Why not show them two artworks side-by-side, one with strong contrasting colours, the other more muted. Do they seem to be more interested in one over the other? 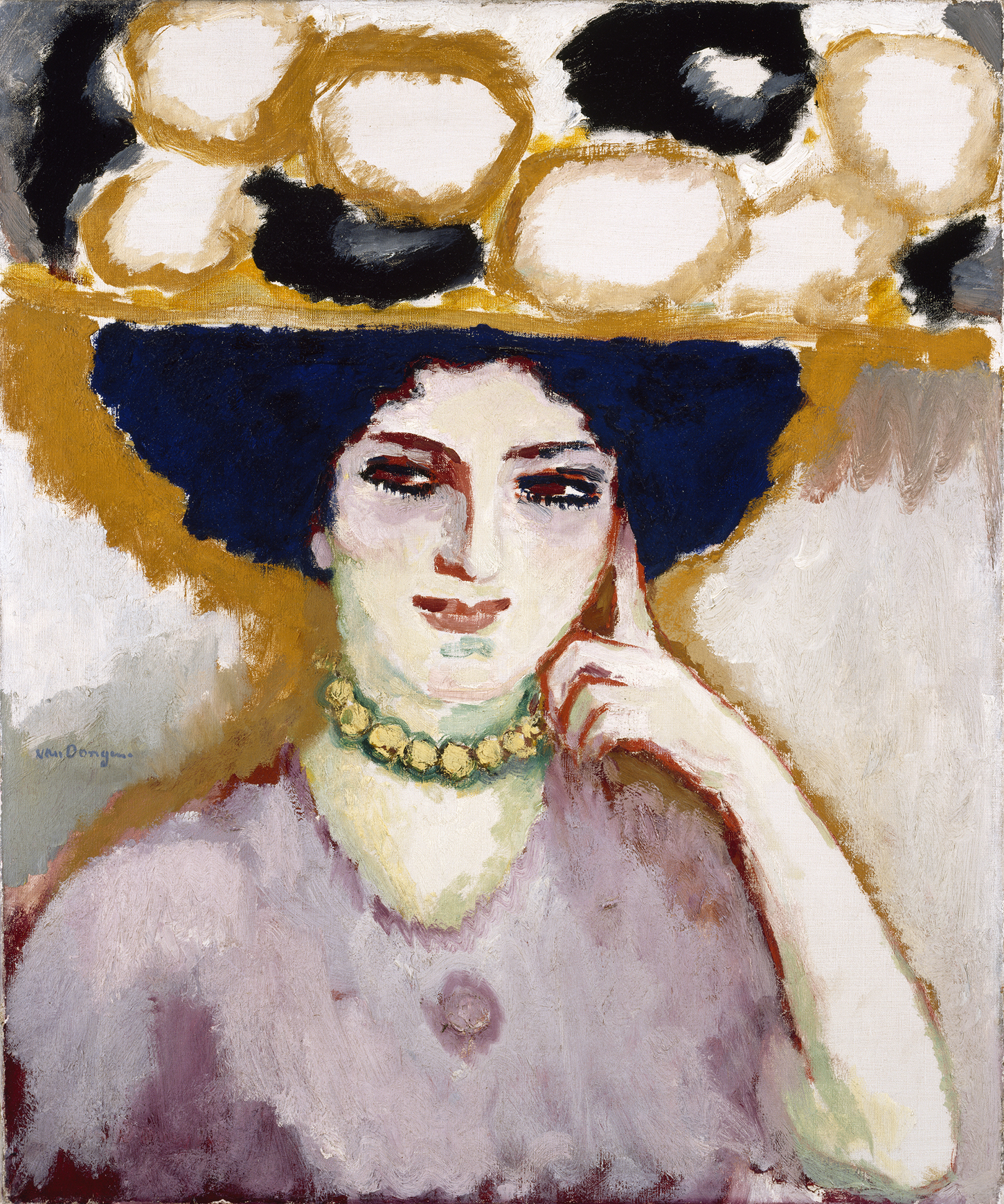 This lady is called Stella. She is painted with bright colours and strong shapes. People were really shocked when they saw this painting over 100 years ago. They called the artist and others who painted like him Fauves. This means ‘Wild Beasts’! Do you think this painting is ‘wild’?

Stella has a cheeky pose and sideways glance. Does this show what she is like? She is wearing a huge hat and a necklace with a pink blouse. Do you like her sense of style? Van Dongen uses bright colours to paint her. She has blue hair, and touches of green in her skin.

At home: why not try to paint a “wild” painting, using bright colours. Have fun experimenting! 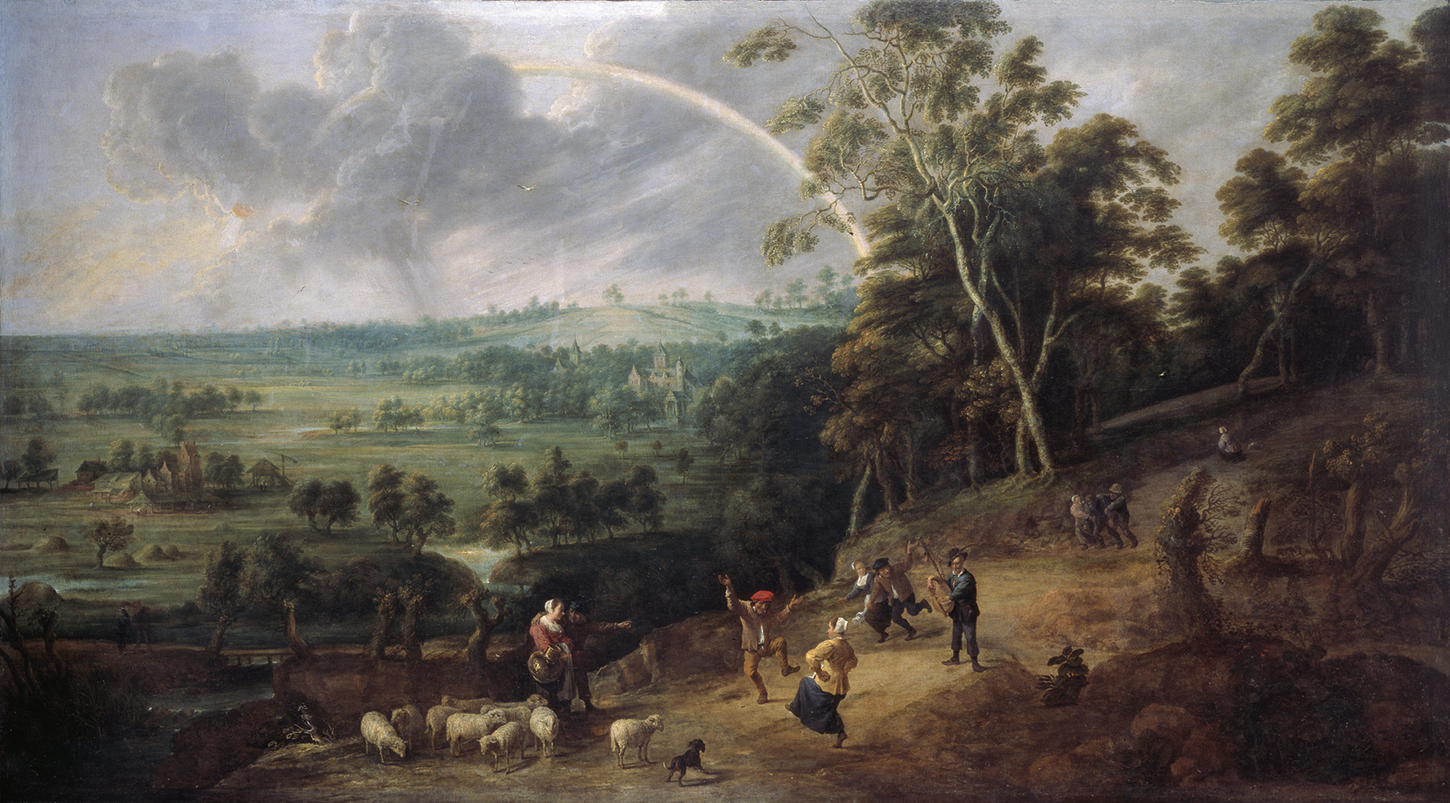 This painting shows people dancing in the countryside. Can you find the dancers? Do they look like they are having fun? Do you like dancing?

Have you spotted the rainbow in the sky? Do you know a song about a rainbow? It's not easy to see the colours here. Do you know what colours are in a rainbow?

At home: there are some animals in this painting. Can you make the sounds that they make? Do you know a song about farm animals and their noises? Old MacDonald had a Farm is a great one!

At home: we have created a step-by-step art activity for families, inspired by another painting of country life. Why not give it a try? 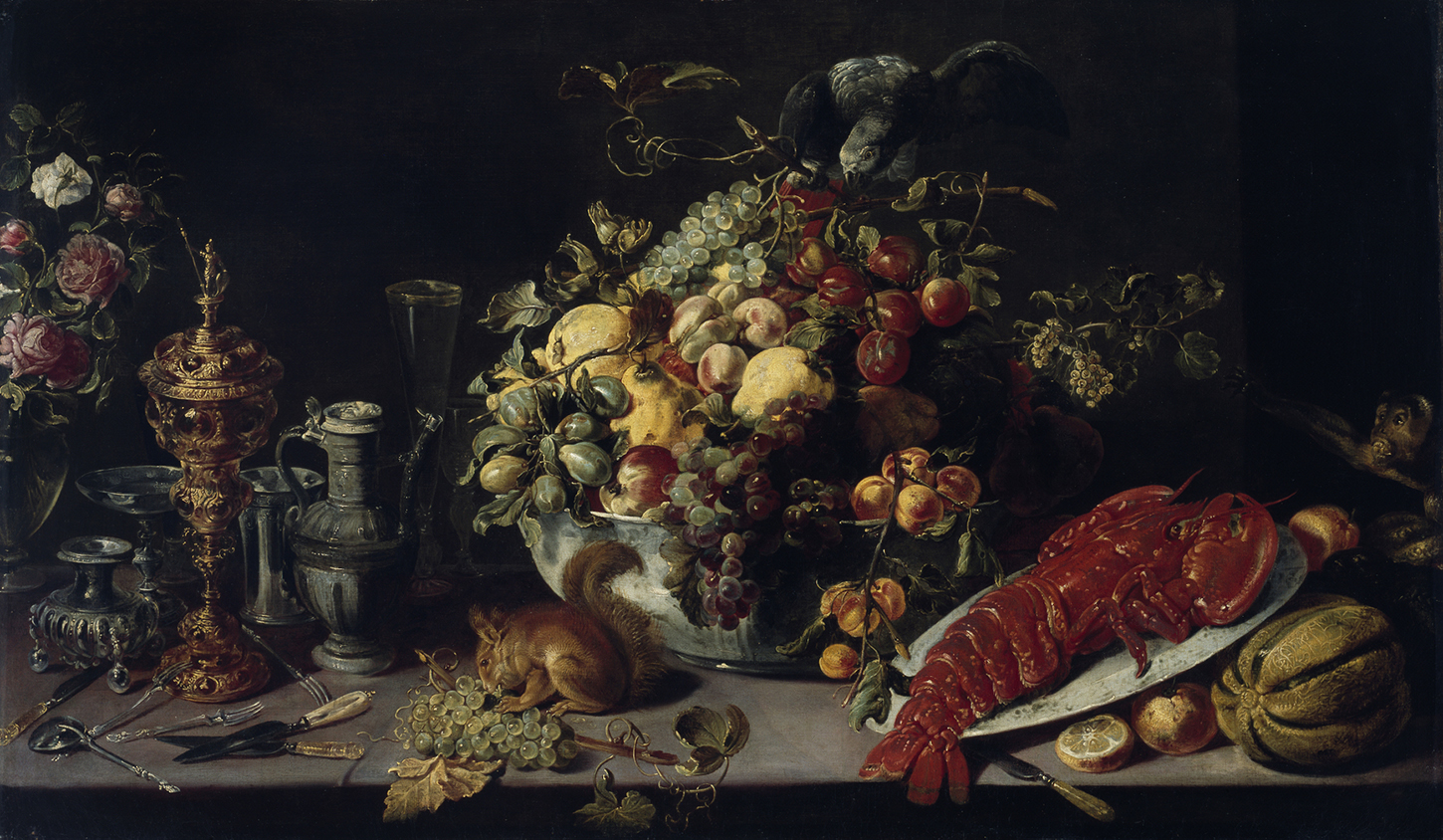 This painting of a table is full of lots of fancy objects. The artist wanted to show everyone that he was really good at painting all sorts of different things. What do you see? Can you see the squirrel with his fluffy tail? Do you think that you would like it if a squirrel was on your table eating your dinner?

But wait! There is another visitor at this table! Look closely, and see if you can find him! It's a monkey, on the far right of the table!

Do you think you would like to eat any of this food? Have you tried any of these kinds of food before? What would you choose to eat from this painting now?

At home: gather some plates, cups, fruit, flowers, or maybe some of your favourite toys, and put them on a table in a way that you think looks nice. Then take out paper and pencils and draw them. Don’t forget to add in a surprise visitor! 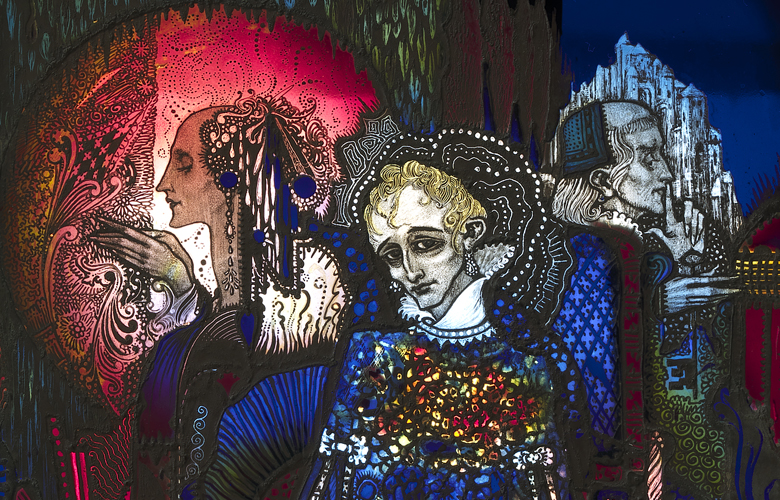 Harry Clarke, The Song of the Mad Prince, 1917. Photo © National Gallery of IrelandCredit

What do you think that this artwork is made from? It's glass! The artist painted on glass with lots of tiny details to make a really interesting picture. In some parts of this artwork, he used two different coloured sheets of glass, one behind the other, to get the colour he wanted. There is so much to see here!

Why do you think it shines so much? There is a light behind it, which helps us to see all of the colours. What colours can you see? If there was no light shining through from the back, we would hardly be able to see anything.

This stained glass was made by the artist Harry Clarke in Dublin. He read a poem and made a picture of a part of the story in the poem. Artists do this all the time. If you have books at home, you'll know how pictures can help to bring a story to life. What is your favourite story? Do the pictures make it more fun? Harry Clarke also did drawings for some famous books, like Hans Christian Andersen’s Fairy Tales.

At home: Try this sensory activity and create your own stained glass inspired work! 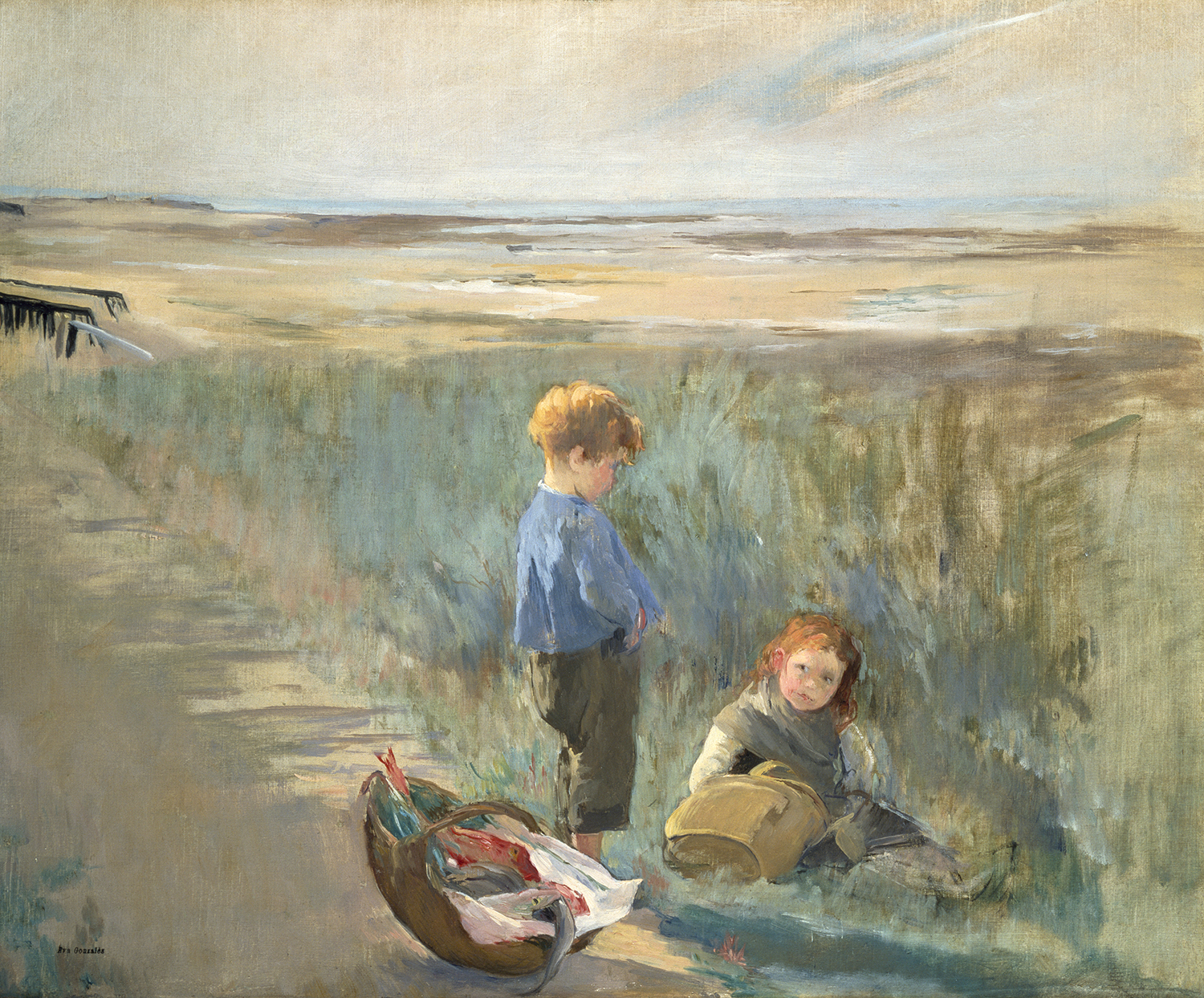 What can we see here? The artist, Eva Gonzalès has painted two children, a girl and a boy, together on a sandy beach. They are in the sand dunes, and the sea is in the distance. Do you think it’s a nice day? Why do you say that?

What is on the ground beside the children? What’s in the basket? Where do you think they got the fish?

Have you been to the beach? What is your favourite thing about going to the beach? Is it swimming in the sea? Making sandcastles? Or something else?

At home: enjoy this video about enjoying sensory time outdoors with babies and toddlers.

In the Gallery: find other artworks that show beach scenes in the Gallery. There are a few – can you spot them? 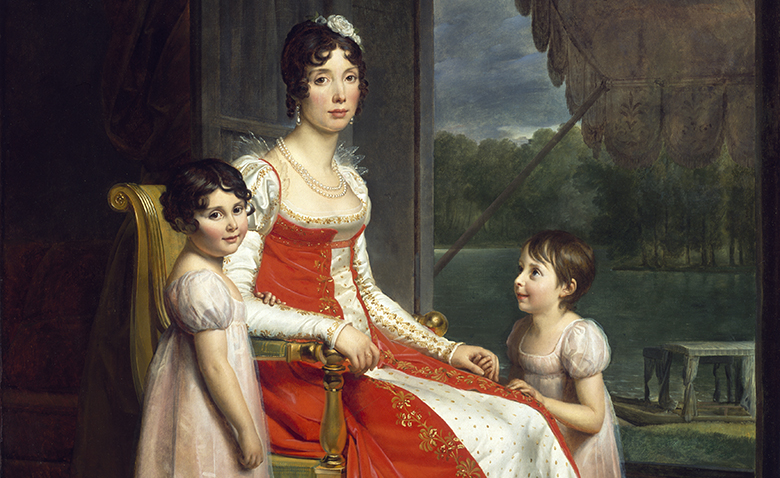 Detail from Baron François Gérard, Julie Bonaparte as Queen of Spain with her Daughters, Zénaïde and Charlotte, 1808-1809. Photo © National Gallery of IrelandCredit

This huge painting shows a queen, the Queen of Spain, with her two daughters by her side. The Queen is not wearing a crown because it is supposed to be a painting of her family when they are relaxed, and a crown is heavy! What does she have in her hair instead?

The Queen is wearing a velvet and silk dress. Look closely. How do you think her clothes would feel? Fluffy? Smooth? The Queen’s dress probably had thread made from real gold in it!

Look out the window behind the princess. There is a lake with a boat on it. Do you think it would be fun to go on a boat ride on a lake?

At home: what do you think the princess is saying to her mother? Pretend to be the princesses and the Queen with the grown-ups in your group.

At home: this step-by-step video is inspired by another work from the collection which shows a fancy costume. Try it and create your shadow portrait!